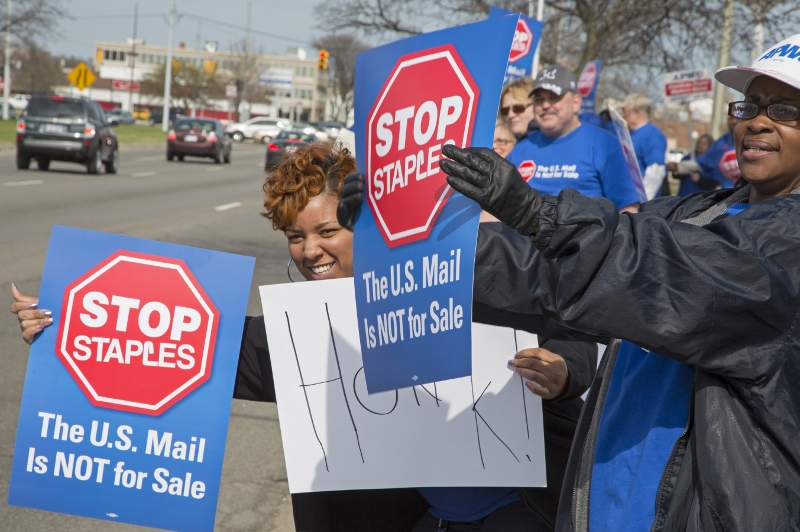 Postal clerks’ work is being outsourced to low-paid Staples employees, but Staples isn't the half of it. Such companies as Amazon, Google, Walmart, and rideshare company Uber are undercutting unionized delivery jobs at every turn. Photo: Jim West, jimwestphoto.com.

Their employer is the U.S. Postal Service, but a few unlucky Bay Area letter carriers were hired only to find out their job is actually delivering groceries for online retailer Amazon at 4 a.m.

It’s an experimental program being staffed with City Carrier Assistants—the lowest tier of union letter carriers, permatemps who make $15-17 an hour. To find their way in the dark they’re issued miner-style headlamps.

“Some carriers hear about the program and they quit,” says longtime letter carrier Angela Bibb-Merritt. “They were under the impression they were going to be carrying mail and working in the daytime.” She worries people could be attacked and robbed, carrying groceries around at such a lonely hour.

You’ll hear no such worries in the breathless tech press, abuzz about experiments in package delivery. The grocery setup is unusual in that it relies on postal workers (though the lowest-paid ones). But most of these schemes are ways to circumvent the Postal Service and UPS.

Cuts to postal jobs and facilities are making existing service worse, helping create niche openings that for-profits are exploiting. Call it privatization by a thousand cuts.

If you work sorting, trucking, or delivering packages, are Amazon, Google, Walmart, and rideshare company Uber coming after your job next?

E-commerce giant Amazon relies heavily on UPS and the Postal Service, but seems to be looking to change that. Its much-hyped trials of robot delivery drones (aviation regulators have put a hold on that for now) are the least of it. The company is testing out ways to replace union workers for every leg of a parcel’s trip.

For instance, it’s opening its own “sortation” plants to facilitate Sunday and holiday delivery, 15 of them this year. “When you see us announcing Sunday delivery, you can assume a sortation center is close by,” Vice President Mike Roth told the Seattle Times.

The function of these plants to sort packages by zip code so they’re trucked to the right post office for delivery—cutting out UPS and Postal Service sorting and trucking.

A lot of hype is concentrated on the “last mile” of delivery, till now mainly the terrain of UPS, FedEx, and especially the Postal Service, which completes the last mile even for roughly 30 percent of the other two shippers’ deliveries. The SurePost and SmartPost programs allow UPS and FedEx to lean on the public system by dropping off presorted packages at post offices for letter carriers to take the last mile.

Amazon already contracts with such companies as LaserShip and OnTrac, which have so far gotten away with categorizing their drivers as “independent contractors” instead of employees. A Huffington Post investigation called these drivers “the real Amazon drones.”

The piece profiled a LaserShip driver who was getting $1.50 per delivery, 150 deliveries a day. Sounds all right, $225 a day, till you start subtracting the costs drivers have to cover—car, insurance, gas, plus various mandatory paycheck deductions. Then factor in unpaid hours loading the van, and none of the protections of being an employee: overtime pay, workers’ compensation, tax withholding, health insurance, paid breaks, paid sick days, collective bargaining rights.

Taking a still lower road, taxi worker foe Uber and its copycats are bringing their ugly model of “fractional employment” to package delivery. It’s even less secure than being an “independent contractor” because each contract lasts only as long as a single delivery.

Experiments concentrated in San Francisco and New York City are first targeting the spoiled-millennial demographic. Cringe along at a SiliconBeat profile of an eBay courier as she races in her own car to buy a laptop charger and ferry it to an Internet café before the 60-minute deadline.

The lucky recipient is a web designer who’d forgotten hers at home. Cost: $80 for the charger, $5 fee to eBay. The courier gets an hourly wage, undisclosed, and risks her neck all day checking the eBay app while driving.

Clearly this is wildly inefficient, as well as dangerous and eco-unfriendly. “I picture in my mind a big intersection with all these cars crashing into each other, all bringing someone’s toothpaste to them,” UPS driver Rafael Monterrosa told the tech news site Re/code.

And for this extreme version, the target demographic seems limited. As the Occupy movement taught us if we didn’t know before, most millennials aren’t rich and spoiled—they’re broke and indebted.

But retailers are pitching variations on this theme to a wider market. Walmart has floated the idea of asking in-person customers to drop off online orders on their way home, in exchange for discounts: just enough to cover the gas.

It’s too bad for workers, but speedier delivery sounds like a boon for customers, right? Not so fast.

There’s a reason such experiments are clustered in cities where delivery addresses are dense, the most cost-efficient areas for any shipper. There’d be no profit in a version of Uber for, say, carrying prescriptions to rural seniors.

The beauty of the Postal Service is that it provides universal service at cheap, universal rates. Income from lower-cost services subsidizes higher-cost ones. What happens if for-profit companies skim off the lucrative business?

The results are already on display in many European countries where postal service has been partly or completely privatized. The private companies focus where the money is, but for regular people, service gets worse and prices skyrocket.

You can see a stratified system in the works here too, as the Postal Service tests its own same-day delivery program, MetroPost, in San Francisco, using lowest-tier letter carriers.

Yet “Say goodbye to next-day mail delivery” was the opening line of a recent article in the Erie Times-News.

That’s because the mail sorting plant in northwestern Pennsylvania is one of 82 the Postmaster General plans to shutter in January, just the latest round of such closings. These embattled plants do the same thing Amazon’s celebrated new “sortation centers” do, but for packages from any sender, not just Amazon.

Except when unionized, public-sector workers do it, it’s called antiquated rather than innovative.

Mail plants are busy in the e-commerce era. They should be expanding. Instead, closures have swamped remaining plants with mail. The resulting delays surely help create the demand for specialized, faster service—among those who can afford to pay. Which won’t be those of us whose jobs get Amazonized.

A Bay-Area startup called Swapbox provides automated lockers in laundromats and convenience stores for shipping and receiving packages. You drop off the item you want to mail (in the promotional video, it’s a ukulele) in a locker; Swapbox packs and ships it. You can also have packages shipped to the locker.

It’s true this meets a need for apartment-dwellers who lack a stoop to receive shipments while they’re at work. But why not just pick up parcels at your local post office? There are still 31,000 of these across the country, a retail network “larger than McDonald’s, Starbucks and Walmart combined,” the Postal Service boasts.

Because real post offices are getting harder to use, that’s why—as hours are shortened, window clerk staffing is cut back, and customers wait in longer lines. Like the plant closures, it’s hard not to see post office cutbacks as sabotage from the top, creating opportunities for low-wage competitors.

In fact, Swapbox’s press release uses the cuts as a selling point: “Just last month, the USPS drastically cut hours at 21 of 39 post office stations in San Francisco. What if instead of running to your local post office, you had a ‘mini post office’ near your home—one that is open 24/7 and uses advanced robotics…”

No workers appear in Swapbox’s promotional video, as though the app itself does the work. But presumably, some invisible employee or “independent contractor” comes by with a box and a roll of tape to pack the ukelele, and a car to drive it to the post office or UPS store.

Labor Notes tried following up on the press release’s offer to interview Swapbox’s “brilliant” young entrepreneur-CEO. We wanted to know what kind of jobs these were: the pay, the hours, do you have to use your own car.

But the publicist backpedaled, suggesting the CEO could answer questions in writing. After we sent questions they both stopped responding at all.

Google, eBay, and Amazon have all been testing their own versions of robotized package lockers. And the Postal Service too has launched lockers outside certain post offices in New York and D.C.

An 88-page online guide from the American Postal Workers Union details how to fight closures of mail plants and post offices in your area, with examples, practical tips, and photos from local battles. There’s info on finding allies, planning a protest, packing a public meeting, writing a press release, beating apathy, and more. Download it here.

Like the self-checkout line at the grocery store, these GoPost lockers are a way of automating postal clerks’ work—instead of boosting window clerk staffing and post office open hours to meet the booming need.

Meanwhile clerks’ work is also being directly outsourced to low-paid Staples employees, at “postal counters” inside the stores. Postal unions are boycotting Staples over the deal. The Teachers (AFT) and the AFL-CIO have endorsed—and given the boycott a publicity boost for back-to-school shopping season.

In Berkeley, activists are drawing attention to the fight by occupying the sidewalk outside a Staples. They’ve maintained their tent camp and info table for two months so far, says letter carrier Bibb-Merritt. Police have come by and argued, but so far haven’t managed to run anyone off.

Turning back the race to the bottom in mail delivery may start with the Staples fight. “We have to make sure we have a movement that makes sure that post offices are not closed, period,” American Postal Workers Union President Mark Dimondstein said in January as the campaign began.

“In the long run, we fight for these expanded services to be done within those brick-and-mortar post offices, within the postal system. We aren’t afraid of efforts to try taking postal services to where the public is. But we have to do it in a way that protects the public.”

A version of this article appeared in Labor Notes #427, October 2014. Don't miss an issue, subscribe today.