Everyone On the Bus: Rider-Driver Alliances 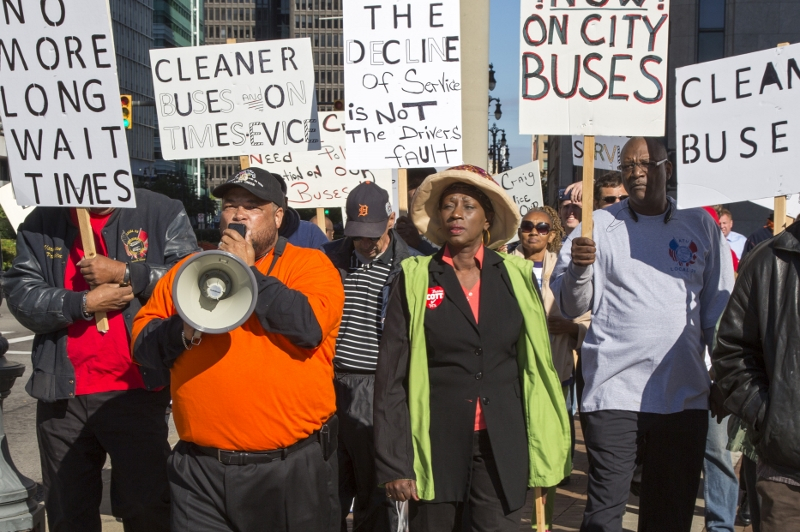 When Barbara Lott-Holland was laid off, she couldn’t afford to keep her car, so she used public transit to get to temp jobs around Los Angeles.

People like her risk losing hours, or even their jobs, when bus service is cut. It’s one way cuts “put a physical, mental, and economic strain on that community,” said Lott-Holland, now co-chair of the L.A. Bus Riders Union (BRU).

The effects are similar on the drivers, mechanics, and office workers who make public transportation run.

With so much common interest, there are plenty of opportunities for solidarity between transit riders and drivers. Community groups, often calling themselves bus riders unions, are popping up all over the country—and make ready allies for willing unions.

THEY’RE ON THE BUS

Transit cuts can take many forms. Sometimes entire routes are eliminated. Sometimes there are fewer buses running a route, which means longer waits and more crowded rides. Riders may have to transfer more, adding time to their commutes.

Whatever the particulars, it’s not hard to find potential allies in a fight against cuts. “We find bus riders on the bus. That’s where they are,” says Vivian Satterfield of Environmental Justice Oregon (OPAL), a community group in Portland.

At first some drivers there were confused by organizers jumping on buses and trying to talk to passengers about bus service. But Mary Longoria, treasurer of Transit Union (ATU) Local 757, saw the potential for collaboration and got involved with OPAL. She used the local’s newsletter, union meetings, and one-on-one conversations to let drivers know the community organizers were on their side.

The first Saturday of every month OPAL holds organizing trainings, followed by bus outreach. Now some drivers show up to join the outreach on their days off.

The Orlando chapter of Jobs with Justice used on-the-bus outreach too, working with ATU Local 1596 to fight proposed cuts. When organizers boarded, some drivers began using the bus speaker system to explain to passengers what was going on. This seemingly small gesture helped lend them legitimacy, said JwJ Organizer Patrick Foote.

The bus is one great place to find allies, but there are others.

Members of ATU Local 85 in Pittsburgh are fighting to bring back bus routes that were recently cut. “We have whole segments of our community that don’t have any transit at all,” driver Mike Harms said. In neighborhoods where service was slashed, “people have to walk a mile to a bus stop.”

So union members are going to events in affected neighborhoods, and setting up tables to talk to residents.

When bus service was cut back in New York City, members of Transport Workers Local 100 took a look at their own relationships. One steward’s aunt was president of a tenants association in a housing project affected by the cuts. He reached out to residents and brought them into the campaign.

The Transit Riders Union in Seattle reaches riders at the hubs where you transfer from one line to another.

Plus, it turns out “a lot of our members use transit to get to work,” said rail operator Chuck Miller in Seattle. Some of these ATU Local 587 members have joined the Transit Riders Union too.

Activists have also found creative ways to draw people in. In Los Angeles, BRU does bus theater: they board the bus and perform a skit, playing characters who are trying to get to court appearances or doctor appointments.

When cuts were proposed to bus route 55 in Orlando, community members planned their action to dramatize exactly how riders would be affected. The bus served a low-income area where many residents depended on the bus to get to work and school.

At 4:00 a.m., a group of 25 riders were joined by religious leaders and sympathetic politicians to march the bus route. They wanted to draw attention to the early-morning trek many local residents would have to make if the line were cut. The action stopped the bus service from being eliminated, though the city did still cut back the schedule, leaving residents with longer waits and more crowded buses.

And in Salt Lake City, the Utah Transit Riders Union challenged officials on the Transit Authority Board to spend a week traveling exclusively by public transit. A two-mile walk to and from a dentist appointment—it was inaccessible by public transit—showed one representative just how badly residents needed expanded services.

Local transit workers in Washington, D.C., are alert to a horrible new possibility: a private takeover.

The chair of the city council’s Transportation and the Environment Committee is pushing a bill that would allow the city to outsource its existing public transit. “The potential for cuts is greater when we have a private operator whose motive is profit, not people,” said Local 689’s David Stephens.

This isn’t the first time privatization has been attempted in Washington. Until the mid-1950s, transit there was owned by the private Capital Transit Company, which ran service into the ground.

Senators accused the company’s manager of following “a policy of ‘profits first and the public be damned.’” Low wages and repeated fare increases led the local to strike, and eventually pushed the government to take control of the transit system.

Now the local is working with the Washington Interfaith Network to preempt a fight against cuts by blocking the privatization that could produce them.

Community-labor coalitions aren’t easy—that’s as true in public transit as anywhere else.

In Portland, “there’s a lot of things that [management] has done… to really almost pit the riders against the drivers,” said Satterfield. Longoria agrees: “They cut service and of course blamed it on union wages and benefits.”

L.A. transit workers were threatening a strike when Lott-Holland first joined the BRU. She worried about how she would get around.

But by the time they did strike for 21 days, she had “realized they are working people, just like us,” Lott-Holland says. She even walked the picket line.

On the flip side, unions don’t always support riders. Sometimes they even back fare increases, Lott-Holland said, “not realizing that at the end of the day a lot of these people who work on these [buses]… they get on a bus to go home.”

In Seattle, some transit workers have joined community groups in fighting to keep fares down. “Fare hikes hurt those least able to pay, instead of the corporations who are most able to pay,” said bus driver Chuck Lare.

He wants to see a progressive tax on corporations to fund transit. “There’s lots of money here,” Lare said. “It’s a question of whether you have the will to go after it.”

Reaching out to individual riders and bus riders unions can be a lot of work. “You really have to go to meetings,” Longoria says, “be consistent” and “be genuine... You have to be going there because you really believe in the riders.”

A version of this article appeared in Labor Notes #427, October 2014. Don't miss an issue, subscribe today.
Julia Kann is a staff writer for Labor Notes.julia@labornotes.org
Related
Rest in Power, Tim Schermerhorn: Leader of New York Subway Union Reform Effort »
A Life in Transit: ‘What You Can Get Is Set by How Far You Are Prepared to Go’ »
Texas Union Activists Fight 'Microtransit' Privatization »
Transit Workers Deserve Hazard Pay »
Bay Area Transit Workers Organize for Hazard Pay, Build Toward Contract Campaigns »