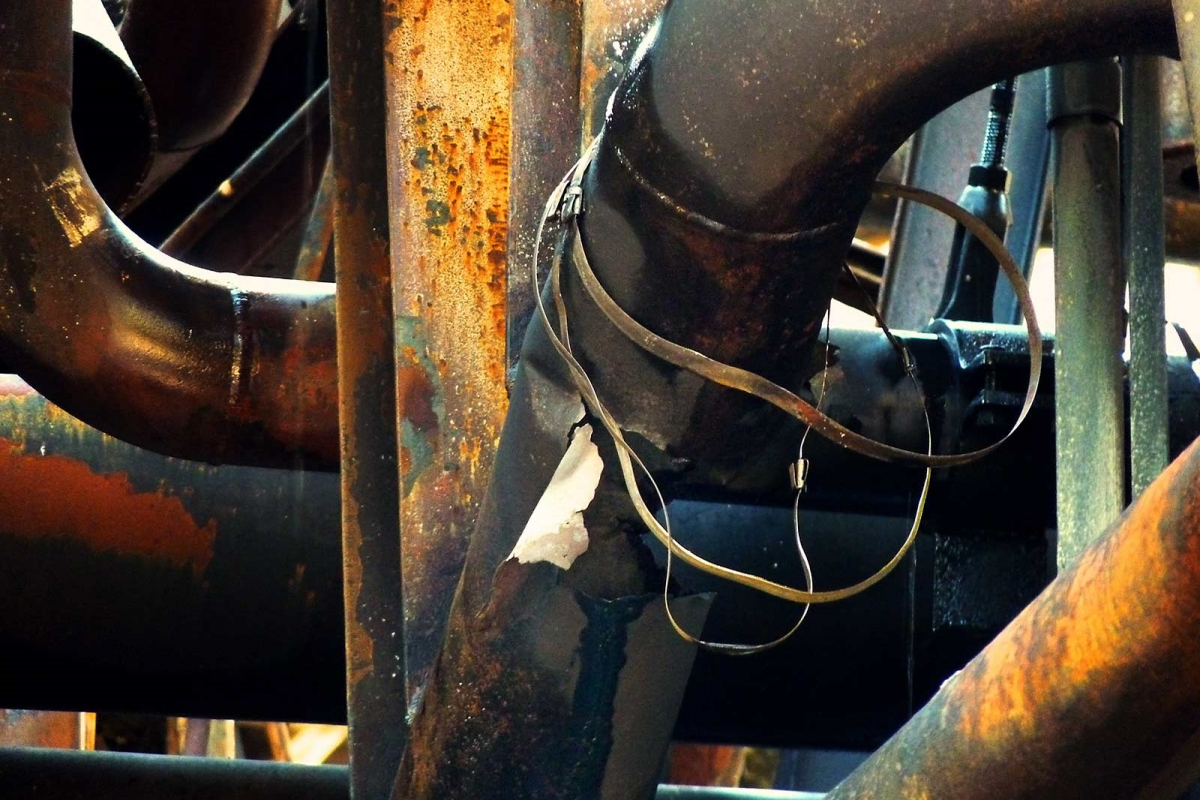 A severely corroded pipe at the Chevron refinery in Richmond, California, caused an explosion in August 2012 that nearly killed several workers and sickened thousands in the town. Cal/OSHA inspectors have been cut by Democrat Jerry Brown's administration. Photo: U.S. Chemical Safety Board.

For their own protection, California workers and their unions had better start raising hell about the erosion of job safety protections since Democrat Jerry Brown became governor four years ago with strong labor backing.

Since 1973, California has run its own “state plan” program with regulations and enforcement, Cal/OSHA—widely seen as more effective than Federal OSHA.

However, since Brown appointed Christine Baker as director of the department that controls job safety funding and staffing, Cal/OSHA has been put on a “starvation diet” that has undermined its effectiveness.

In 2012, the last year for which there is confirmed data, 375 California workers were killed on the job—meaning every single day a Californian goes to work but never returns home. Thousands more die annually due to occupational diseases contracted at work.

That year 14,000 workers were hospitalized after job injuries, and there were 40,220 reported cases of lost workdays (median days lost = 21 days). State workers comp data indicates there were 646 workplace amputations that year.

Nevertheless, under Brown and Baker, Cal/OSHA has been slowly stripped of the resources, staffing, and political will necessary to reduce this carnage.

In January 2011 Brown inherited from Republican Arnold Schwarzenegger a Cal/OSHA inspectorate of 195 field compliance officers. By July 2014, there were only 175 filled enforcement inspector positions.

Even if all 18 vacancies were filled, the total number of field enforcement officers would be 193—below Schwarzenegger’s level, and also well below the number of California Fish & Game wardens (250) currently in the field.

Surely Californians deserve the same level of state safety protections as workers in other states—or as the wildlife in their own state?

In addition to restricting resources, Brown and Baker have promoted the standard Republican approach to regulatory enforcement at Cal/OSHA. They believe that the vast majority of employers either do the right thing, or would do the right thing if they knew how. So Cal/OSHA’s priority, they say, should be compliance assistance, partnerships and consultation for these responsible employers.

For the small layer of employers they consider bad actors, traditional regulatory action is required to eliminate unfair competition. But for responsible employers making a good-faith effort who make an honest mistake, Baker and Brown maintain, Cal/OSHA should not be issuing “gotcha” citations and fines proposed by workplace inspectors.

And it’s getting worse. After an intense campaign against her by California employers and their lobbyists, Cal/OSHA Chief Ellen Widess was forced to resign by Baker in September 2013. After that, the department has deprioritized the agency’s across-the-board enforcement, instead promoting Baker’s “new paradigm” of compliance assistance and partnerships with employers, especially large, politically-connected firms.

The problems that Cal/OSHA faces—lack of resources, of staffing, and of aggressive inspecting—are reflected in many other states where job safety agencies have even fewer resources and even more business-friendly attitudes than Cal/OSHA under Brown.

Other states will hardly be motivated to raise the bar by California’s example. Instead, nearby Washington and Oregon may soon face employer pressure to follow Cal/OSHA’s downward trajectory.

Unfortunately, California’s top labor officials seem more concerned with maintaining friendly relations with the Brown Administration and preserving labor’s political capital for issues they deem more important than health and safety. Since labor cannot get everything it wants in Sacramento, the union thinking goes, lobbying priorities have to be set, and some issues pushed to the bottom of the list.

Unfortunately, occupational health and safety has not been a high priority of organized labor for several decades now. The results of that political expediency are painfully clear in workplaces around the state.

If it were not for grassroots pressure from the labor movement, there would have been no
Federal OSHA Act enacted in 1970, nor Cal/OSHA established in 1973. Building a base of worker health and safety advocates—in union and non-union shops alike—is the key to strengthening OSHA enforcement today, both on the shop floor and in the halls of the state Capitol. This will require a member-driven change of approach for many union and workers’ rights organizations.

In California and elsewhere, workers and their organizations need to hold elected officials’ and their appointees’ feet to fire, and not let them weaken crucial safety regulations and effective enforcement any further.

Garrett Brown retired from Cal/OSHA in January 2014 after 18 years as a field compliance officer and 2.5 years as Special Assistant to the Chief in Cal/OSHA headquarters. In July 2014, he established an “Inside Cal/OSHA” website at insidecalosha.org. Brown is a member of the Professional Engineers in California Government union.

Related
It Took a Boatload of Uber Cash to Beat Self-Organized Drivers »
Why Did California's Tax the Rich Measure Lose? »
Most Expensive Ballot Initiative in California History Pits Uber and Lyft Against Drivers Who Built a Union from Scratch »
Overturning Austerity 101: California’s Prop 15 Will Tax the Rich »
Viewpoint: Pro-Labor Candidates Are Upending New York Politics—But Where Are the Unions? »