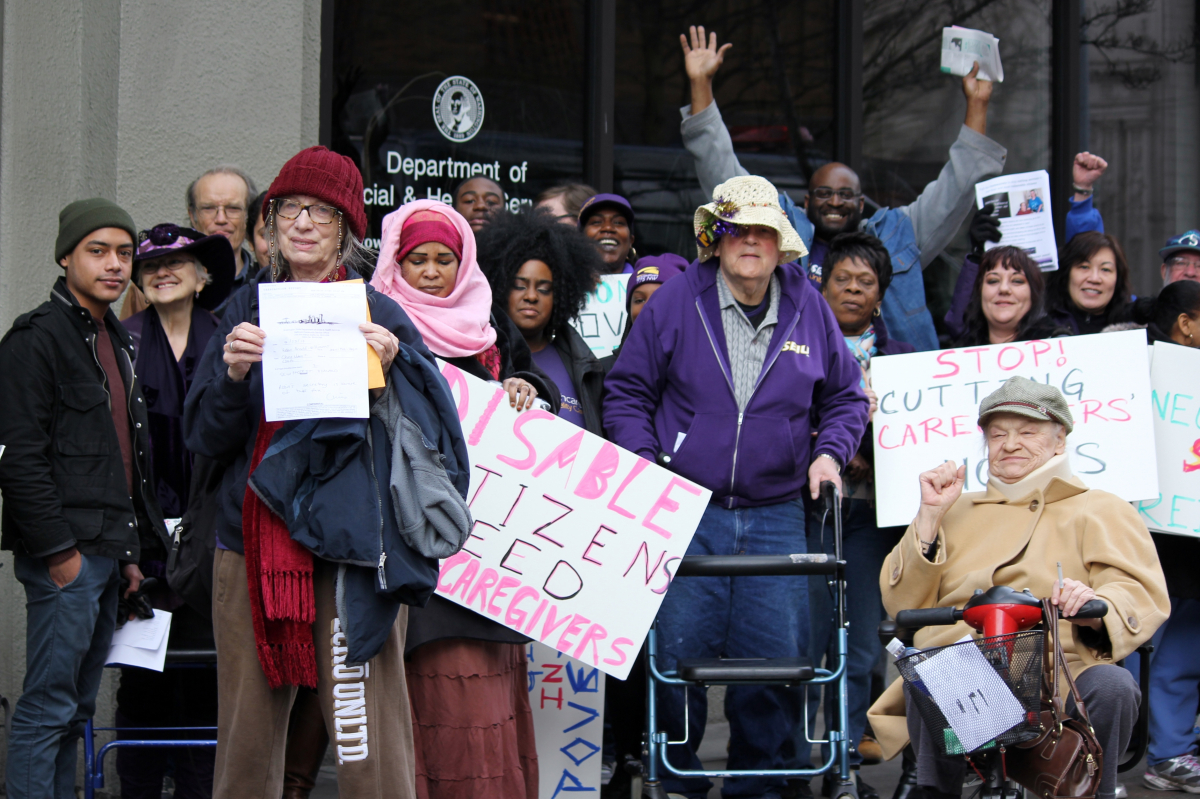 The Supreme Court in Harris v. Quinn has struck down agency fees for Illinois's home care union, finding the workers to be only "quasi-public employees." Home care workers provide in-home care to elderly and disabled clients. Above, members occupied a Washington state agency office in 2012 to protest cuts to services for their clients. Photo: SEIU Healthcare 775NW.

Unions were bracing for the worst: a Supreme Court decision that could have created a national “right to work” policy for the entire public sector.

That didn’t happen. The court’s decision in Harris v. Quinn this morning was narrower.

But it will still be a hard hit on the unions that have staked their futures on unionizing the rapidly growing home care sector, notably AFSCME and the Service Employees (SEIU).

Home care workers care for elderly and disabled patients. Some are placed through state agencies, while others care for their own relatives. Either way, getting the care at home keeps people out of nursing homes and other costly institutions.

The ruling creates a new gray area, finding that Illinois's 26,000 home care workers are not fully public sector. The court designated them “quasi-public employees” and ruled that unions cannot force them to pay dues or an agency fee.

Their logic is that home care workers are dually employed—by their clients and by the state, through Medicaid funds. While the client has the ability to hire and fire home care workers, the state determines their pay, benefits, and other aspects of their work.

This move could affect similarly organized and funded home care and childcare workers in other states too. There are 1.8 million home care workers in the U.S. already, and labor statistics forecast their ranks will pass 3 million by 2020.

‘An Obsession with Dues’

The justices who make up the court’s conservative majority clearly don’t like the idea of workers having to pay dues at all. It appears they decided to rule narrowly this time, but set the stage for future challenges to dues requirements in the rest of the public sector.

The National Right to Work Legal Defense Foundation, which funded the lawsuit by eight Illinois home care workers, is pushing to do through the courts the same thing anti-union elected officials have been pushing legislatively, as in Wisconsin and Indiana: cut unions off at the knees by limiting their ability to raise money from the workers they represent.

“Conservative forces are using ‘right to work' [tactics] as an opportunity to attack unions in general,” said labor attorney and negotiator Joe Burns, author of Strike Back: Using the Militant Tactics of Labor’s Past to Reignite Public Sector Unionism Today. “Conservatives have an obsession with dues.”

After Wisconsin’s Act 10 cut off dues deduction and all but eliminated public sector bargaining rights, AFSCME’s state council there saw its membership fall by 60 percent. The union’s budget declined at the same rate. It was the same for other unions in the state.

Home care workers are generally paid low wages—even below minimum wage, until they unionize, because they tend to work so many hours unpaid—and fight to work enough paid hours to get by. Often they only get so many hours approved by the agency, not enough to live on or to sufficiently care for the client.

Unions have been able to secure training opportunities and wage increases. “When I started I was at $5. Now I’m at $11.85. At the end of the year I’m making $13 an hour,” said Flora Johnson, an executive board member of SEIU Healthcare Illinois Indiana, the union named in the lawsuit. Like the case’s named plaintiff, she cares for her son.

The legal case originated with Pamela Harris, an Illinois home care worker who didn’t want to join the union or pay the associated fee to opt out. In her original complaint, she claimed she shouldn’t be in a union. She’s a parent who cares for her disabled son, she argued, not a state employee.

Fee-payers are those who have opted not to be members of the union. They’re still covered by the collective bargaining agreement, though, and are required to pay the union a slightly reduced fee, intended to cover its representational services. Illinois and many other states allow unions to require such fees.

Unions argue that not requiring agency fees would allow workers to get all the benefits members fight for, without contributing in any way. The “fair share” obligation was upheld by the Supreme Court in 1977 in Abood v. Detroit Board of Education, to avoid “freeloading” and to create “labor peace” after a period of public employee militancy.

Today’s court presumably didn’t dare to reverse nearly 40 years of legal precedent by overturning Abood. Instead, it put Illinois home care workers into a new “quasi-public employee” category to which it said that precedent does not apply.

The ruling could be a financial blow to AFSCME and SEIU, which have large home care units. SEIU represents 400,000 home care workers, 20 percent of its membership. AFSCME’s combined home care and childcare workers top 200,000.

Home care workers already tend to have a much higher rate of fee-payers than other categories of public sector workers. One reason is that it’s a challenge just to reach them, since they don’t meet at a central worksite. It often takes knocking on workers’ doors to ask them to join or keep them involved.

But when the alternative to membership changes from fee-paying to paying nothing, the incentives will skew even worse.

Consider SEIU’s California long-term care local, which represents 170,000 workers, almost all of whom work in home care. According to federal reporting, nearly half of those, 81,500, are “agency fee-payers.”

Losing those fees would be a huge financial hit. The local in 2013 brought in $50 million in dues and agency fees combined.

As Harris v. Quinn moved through the courts, public sector locals, particularly those with home care units, worked to bolster their membership numbers.

In anticipation of the ruling, this year AFSCME passed a resolution called “50,000 Stronger,” urging each local to contribute to signing up 50,000 new members. Locals pledged to sign up 30 percent of fee-payers at each worksite by July 2014. They also vowed to recruit and train 800 new member activists to help sign people up.

Similarly, SEIU Healthcare Illinois Indiana has been working on reducing the numbers of fee-payers by signing people up as members. Johnson was among those who went out visiting Illinois home care workers. Reached before the decision came down, she said, “I know it will have some effect on us, but not to the effect where it’s going to stop us.

“We have had organizing campaigns going on. Most of all, people are coming and telling us they want to join the union because they see the progress the union has made.”

Back to the Grassroots?

Harris v. Quinn comes on the heels of another legal block for public sector workers. A June 10 ruling in California courts, Vergara v. California, declared teachers’ tenure and seniority to be unconstitutional and a threat to students’ equal access to education. That case is being appealed.

Public sector unions also took a hit two years ago when the Supreme Court decided another lawsuit against SEIU over dues and assessments. In Knox v. SEIU, the court ruled that the choice to opt out wasn’t enough: workers have to opt into any special dues assessments, in that case a 2005 levy to help California's SEIU Local 1000 fight anti-union ballot measures.

While the latest ruling will affect how unions collect dues, it doesn’t limit their ability to organize. To regain their footing, Burns suggests, unions should change the way they interact with members, and take a turn back towards grassroots activism.

“Striking was illegal all through the 1960s, yet hundreds of thousands of workers struck,” Burns points out. Public sector unions were weak, and labor laws were stacked against them—until the wave of militancy pushed many states to legalize public worker collective bargaining. As his book describes, it was these illegal strikes that created the public sector labor movement.

Not that striking would be the right tactic for home care workers now, but the bigger lesson applies, Burns argues: “What they found in the period was that the restrictions of labor law didn’t have an impact on the outcome.” The law followed worker power, not the other way around.

CORRECTION: This article has been updated to clarify that the 2012 Knox v. SEIU case applied only to special dues assessments, not all dues.