Seattle $15 Minimum Signed and Sealed, But with Unpopular Loopholes 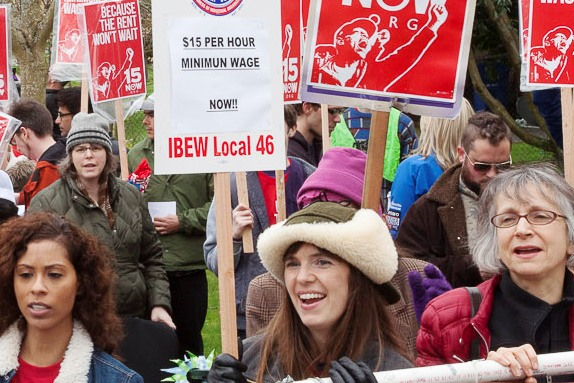 Seattle residents rallied for a $15 citywide minimum wage on March 15. The city council has passed a modified version of their demand. Photo: David McDonald/ATU 587.

Like the making of sausage, the making of the final plan involved some unsavory additions. Still, it’s the nation’s largest step yet toward establishing an adequate wage floor for the working poor.

The plan creates four groups of employers, two large and two small, each on its own phase-in schedule. The last of these groups to arrive at a $15 minimum wage—small employers whose workers receive tips or health benefits—will get there in 2021.

The four categories will converge by 2025, when all Seattle workers will be guaranteed a minimum of $18.13 per hour. From then on, the minimum will increase 2.4 percent per year. (See box at right for details.)

Under the ordinance, “large” employers, with more than 500 workers, will pay an $11 minimum wage starting April 2015.Those who don’t provide health benefits will reach $15 by January 2017; those who do will have a slightly longer phase-in, reaching $15 by January 2018.

A key element of the “large” definition is that franchised employers (for example, McDonald’s) are defined as “large” if their national franchiser, not the local franchise-holder, has at least 500 employees. However, the International Franchise Association, an industry group representing franchised restaurants, had indicated that it will challenge the legality of this definition in court.

Smaller employers, with up to 500 employees, are also in two categories: those that provide health care benefits or whose workers receive tips, and those that don’t.

That’s because, for these smaller employers, a new notion was invented: “guaranteed minimum compensation.” Tips and health benefits will be counted towards this total, which starts at $11 in 2015 and reaches $15 in 2019. Non-benefited, non-tipped employees will get the whole amount in wages.

The minimum base wage, underneath any tips or benefits, begins at $10 in 2015 and rises to $15 by January 2021. So during this interim period, the minimum money wage is actually lower for those who receive health care or tips than for those who don’t.

Currently, Washington state has no separate minimum for tipped workers, but most states and the federal government do (federally, it’s $7.25 with no tips vs. $2.13 with tips).

All Seattle workers will be guaranteed a minimum of $18.13 per hour in 2025. From then on, increases will be 2.4 percent per year.

Washington already has the nation’s highest minimum wage, $9.32, indexed to increase at the rate of inflation each year. But with the new increases, Seattle will pull far ahead of the rest of the state, with $18.13 by 2025 compared to an estimated $12.08 for the rest of Washington.

To keep pressure on the council, the activist group 15 Now has been gathering signatures on an initiative to raise Seattle’s minimum wage more quickly. The group already had 10,000 signatures by last week. Its members will vote whether to continue, but based on statements from leaders, it is likely their initiative won’t go forward, in part due to a lack of support from labor.

What passed was essentially the mayor’s May 16 proposal, with a couple of amendments. Compared with his appointed committee’s recommendation, the mayor’s version contained two major disappointments for labor and its allies.

One is a “training wage.” Employers will be allowed to seek approval from the state Department of Labor and Industries to pay a wage lower than the city minimum, but higher than the state minimum, for the employment of “learners, of apprentices, and of messengers employed primarily in delivery of letters and messages,” as well as of “individuals whose earning capacity is impaired by age or physical or mental deficiency or injury.” The director of L&I would determine limits on time, number, proportion of the workforce, and length of time this training wage could be applied.

The labor co-chair of the mayor’s committee, head of the large SEIU home care workers local, publicly shrugged this off as simply consistent with state standards. But Seattle’s central labor council and 15 Now both opposed the loophole, which invites discrimination against young, old, or disabled people.

The mayor even told the Seattle Times that he would assist employers in seeking approval for the subminimum wage. The new law also contains a separate provision for a teen sub-minimum wage, which could allow employers to pay 85 percent of minimum to workers under 18.

The second disappointment: seriously flawed provisions for enforcement and penalties. The council did adopt several amendments to strengthen enforcement, and a new Labor Standards Advisory Committee will work on further improving these sections.

Two other significant amendments made it through the council. One delayed the initial increase from January 1 to April 1, 2015.The other, introduced by socialist Councilmember Kshama Sawant, permits a worker to file a complaint about violation of the law within three years, rather than 180 days.

Before the vote, the council heard moving testimony from Target and IHOP workers who had joined the May 15 strike for $15, an immigrant home care worker, a hospital worker, and a Safeway worker who after seven years has never earned as much as $10 an hour. The overflow crowd chanted “shame on you” after the council’s votes on certain amendments; people were particularly incensed at the 8-1 vote against eliminating the tip penalty.

But beginning next year, over 100,000 Seattle workers will start to see sharp increases in their pay. And as Sawant noted, “Workers did this.”

The proposal might have seemed crazy a year ago. But the fast food strikes and campaigns for a $15 minimum in various cities are raising the bar, for the organized and unorganized alike. Zoo workers, who recently joined Laborers Local 483, asked themselves “why not here?”

“Our union representative initially proposed the idea and everyone loved it,” said worker-organizer Anne McDowell. “When we talked to the rest of the zoo employees, people were 100 percent in favor.”

The bold opening proposal signals to zoo management that workers aren’t going to settle for nickels and dimes. Of course, whether they can win $15 will depend on how hard workers are willing to fight, and how invested the community is in helping them.

The zoo workers’ demand also marks “a huge step for the fight for $15 in Portland,” said Justin Norton-Kertson, a volunteer with Portland’s recently formed 15 Now group.

It’s huge because it gives the group an immediate cause to rally around, a focus for educating the public, and an example to inspire other unions and community groups. “The zoo is one of Portland’s busiest tourist destinations,” Norton-Kertson said.

The Portland group is targeting its city council with “Living Wage Wednesdays” at City Hall. Zoo workers and other Local 483 members in orange T-shirts led a recent rally, featuring a boisterous street-theater boxing match between a Big Bad Corporate Boss and the workers’ champion. Then the group marched in and delivered letters to the city council offices, storming past security guards who tried to allow only five people into the public building.

Shamus Cooke is a social service worker, union officer, and writer for Workers Action. He can be reached at shamuscooke[at]gmail[dot]com