How to Be a Staffer in a Democratic Union 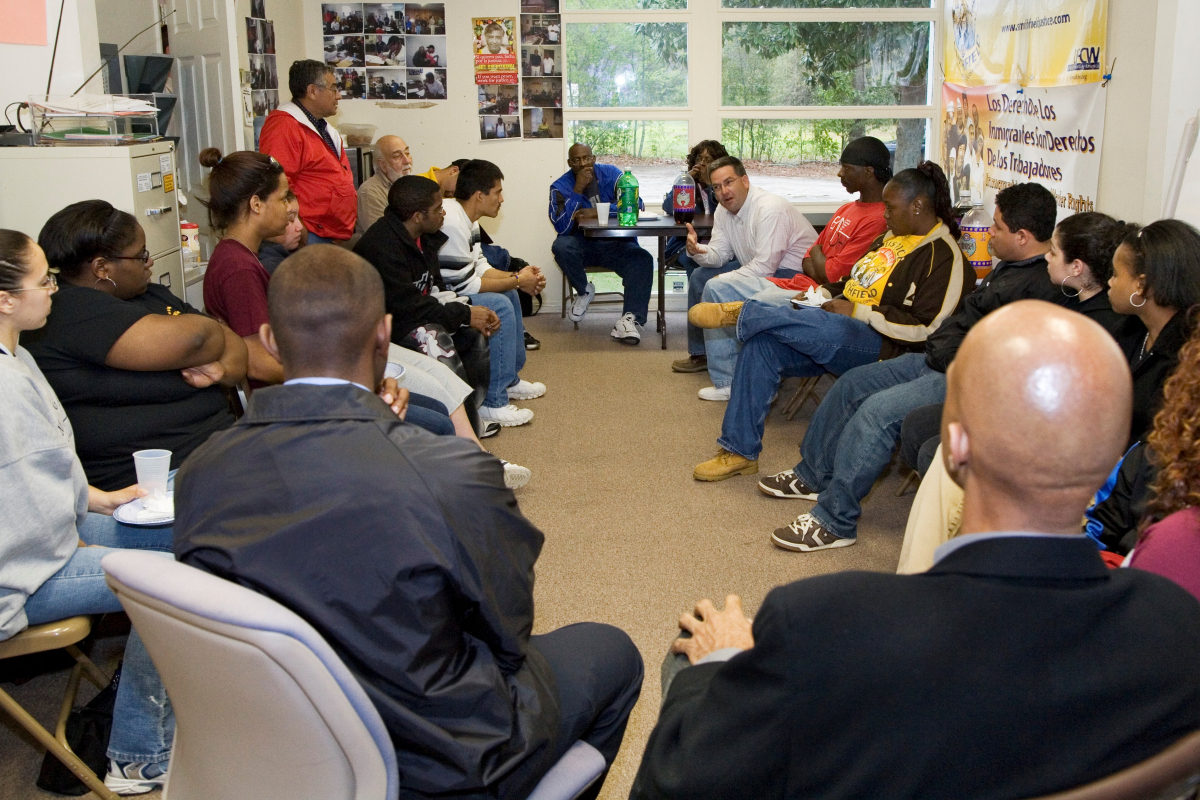 If members run the local... what exactly is the union rep's job? We asked four experienced staffers how they approach their day-to-day tasks while keeping the rank and file in the driver’s seat. Photo: Jim West/jimwestphoto.com.

Suppose you’re a union staff rep. (Or a business agent, an internal organizer, whatever the local lingo is.) And suppose you believe in union democracy: the members should run the fight against the boss.

Where do you come in, then? What exactly is your job, and how can you do it in a way that keeps the rank and file in the driver’s seat?

The obvious danger: you work for the union all day, while members have their jobs to do. It can be all too easy for members and staffers alike to start thinking “the union” means the people who have desks at the union hall: the top brass and the reps they hire. That’s not only undemocratic—it’s a terrible foundation for building power.

We asked four experienced staffers how they see their jobs and how they translate the idea that the members run the union into their day-to-day tasks.

One union tackles the problem at its root by drawing a thick line around the role staffers play.

University Professional and Technical Employees “takes member-run to the nth degree,” said Vice President Lisa Kermish. She was a research administrator at the University of California before coming to work for her union.

Stewards do all UPTE’s representation, even arbitrations that pit them against management attorneys. Union staff do no direct grievance handling.

Staffers don’t participate in bargaining; they’re not even in the room during negotiations. Nor do they participate in discussions of the union’s policies or direction. Instead, their job is to recruit and train members to do these tasks.

“Our golden rule is, don’t do for members what they can do for themselves,” Kermish said, “and its platinum corollary is, if there isn’t a member to do it, it won’t get done.”

Holding fast to these rules isn’t always easy. What’s a staffer to do when the clock is ticking on a grievable situation and no steward is willing to take it on? Sometimes the union has to call in a “super steward” from Los Angeles to handle a case an hour away in Irvine, or throw a new steward “into the deep end of the pool”—with support from staff, but never with a staffer doing the task for the steward.

The policy, Kermish said, is “based on the premise that, if we’re really a member-run union, we have to do more than talk the talk.”

Part of a union rep’s job, Joe Fahey says, “is to help people do things they’re not used to doing. None of the big changes that we’re trying to make in the labor movement, in our workplaces, in the world, are going to happen if we don’t make small changes, like in how we talk to each other and how we run meetings.”

Tips and Principles for Staffers

Democracy is a lot more than elections. A democratic union is “more about voices than votes,” Joe Fahey says. Who gets to speak in meetings? Who has a say in the strategy? Make room for real debate.

Members make the decisions at every step of organizing, not just the end. It’s not good enough if “some well-worked-out plan has been arrived at, and then members come to a meeting to give it their stamp of approval,” says Ellen David Friedman.

UPTE’s “golden rule”: staffers shouldn’t do for members what members can do for themselves—even if that means sometimes a task goes undone.

Get members talking and working with one another, not just with you. Fahey kept grievances in a stack on his desk. When someone brought a new one, he’d say, “If it’s just you, it’ll go in the pile, but if you can bring back two to three people who have similar problems, it’ll go to the top.”

Encourage people to connect their experiences to a bigger picture. When he organized home care workers, Matthew Luskin learned nearly all had faced abuse or sexual harassment from a client. Each story might feel personal, “but they also knew it was deeply linked to sexism in the industry,” he said—a pervasive atmosphere, not just one abusive guy.

Members may not expect the union to deal with racism, sexism, or the economy until you open the door. When he did, Luskin found, “people had a lot to say.”

Fahey, a retired Teamster, was a union staffer for two decades. He recalls a bottling plant where different groups of workers took out their tension and mistrust on the steward.

“The workers would have a steward election and then be extremely dissatisfied with the steward, whoever it was,” he said, “and so there would be a call to get rid of that damn steward and put somebody else in their place. It just looked like an impossible setup.”

So he called a meeting and asked all the workers to consider themselves potential stewards.

They went around the circle answering the question, “What qualities do you have that would make you a good steward?” Then they went around again to answer, “What would be difficult for you about the job?”

Some said they were shy, didn’t like conflict, or had trouble understanding the contract language. A couple of people said they’d be terrified to do something the old steward used to: stand up near the end of lunch break and yell that the union meeting was going to be on Tuesday.

“By then it was sort of self-evident: there’s no perfect steward,” Fahey said. “Everybody’s going to have parts of the job they could do more easily than other parts.”

Members reached a consensus on the most important qualities of a steward, and agreed it would take a team effort to support whoever had the job. The next steward stayed on for years.

The staffer doesn’t have to be the idea person. In this instance Fahey guided the process, but didn’t supply his own opinions on who should be steward or which qualities were important.

Especially “being a white guy in a union full of mostly Mexican women, more often than not I didn’t have the best answer to the problem facing the group,” he said. “It’s easy for a group to recognize a good idea. My role was to ask the question that led to generating the most ideas, so the group could pick the best one.”

Ellen David Friedman, who organized for many years with the Vermont National Education Association, agrees: be careful not to pre-judge the solution.

Whatever the problem you’re setting out to confront, she said—member apathy, division inside the union, a bad boss, a contract campaign—it’s members who need to define it and plan what to do.

“It’s not authentically democratic,” she said, “if members are simply going out with a goal, like ‘we have to get so many signatures on a petition,’ or ‘get so many people to turn out at a rally.’”

Instead, begin by finding out who’s already aware of a workplace problem, and get them talking to each other.

Your job in the conversation is “to turn what looks like just a dead end or an endless cycle of wheel-spinning or pessimism—‘we’ve tried that, it hasn’t worked, no one cares’—into a frame-able, settable goal,” David Friedman said. “With some dose of, if not optimism, at least commitment to try something.”

Encourage members to figure out who else is likely affected by the problem and how to bring them into the conversation, she said. You can help them prepare and practice what to say to their co-workers.

Maybe the group agrees to do a survey. When you come back together, she said, “now instead of five people concerned, we’ve talked to 50, and wow, 88 percent of them said their problem was x.” Maybe they write up the results, go back out to check in with people again, hold a meeting.

Again you might role-play or talk through how to frame the issue. The organizer’s task is “to prepare people for having their own conversations with each other,” David Friedman said. “Those are where the democratic process is going on.”

But “it’s not as if the organizer or staff person is invisible. They have a job to do: matching power to appropriate goals,” she said. “Members who are not experienced organizers might have an idea of what they want, but it bears no relationship to what can be achieved based on existing power.”

So your role is to point out, “If we really want to do that, we need to build up our power.

“The question is always, how detached can the organizer be from controlling the outcome? Things may go in a different direction than you expected. They may take a lot longer. They may be a lot messier. But the result is authentic and powerful.”

For Chicago Teachers Union organizer Matthew Luskin, a big part of the job is to put union strategy on the table for members to discuss.

The reformers who won leadership of CTU in 2010 believed it would be necessary to build towards a strike. They also knew many members weren’t yet thinking that way.

Organizers also talked with members about “what sorts of experiences would build people’s confidence that these were strategies that could win,” he said.

Members weren’t just asked to wear red union T-shirts every Friday, for example. It was discussed: this will show the scared members at your school how much support the union has. Other activities aimed to prove the union could get parent support.

“I have a low tolerance for meetings where you pretend everybody can participate but really there’s only one acceptable outcome,” Luskin said. “I’m not saying we don’t have a planned strategy we’re trying to get people to agree to. I’m just saying they can say no to it.”

Before and since the 2012 strike, dozens of members have gone through CTU’s summer member-organizer program. There they receive much of the same training a new staff organizer would get: how to draw out a fellow member’s issues and move that member to action.

They learn strategy and campaign planning, too. “It’s important to push back against the ultra-professionalization of organizing work,” Luskin said, “the idea that it requires a secret handshake and training that are not accessible to the rank and file.

“Are there skills and training that staff get, through experience and time? Sure. But the problem we have in the labor movement is not needing more brilliant strategists and tacticians. It’s ‘do we have huge numbers of people willing to take real risks to fight?’”

The point of CTU’s member-organizer program isn’t to boost a particular campaign. The point is how members are changed by the experience.

“We want members to come out of this able to organize their co-workers and community around a struggle in their neighborhood,” he said. “We want to expand the number of fights the union can take on, and that can only happen if more members feel comfortable developing strategies themselves.”

Alexandra Bradbury is the editor of Labor Notes.al@labornotes.org
Related
Steward's Corner: Using Pressure to Settle Grievances »
How to Picket Stores That Sell Your Employer's Products »
Teamsters United Takes the Wheel »
Steward's Corner: How to Think Like an Organizer »
Teamster Insurgents Plan for a Win—And What Comes After »