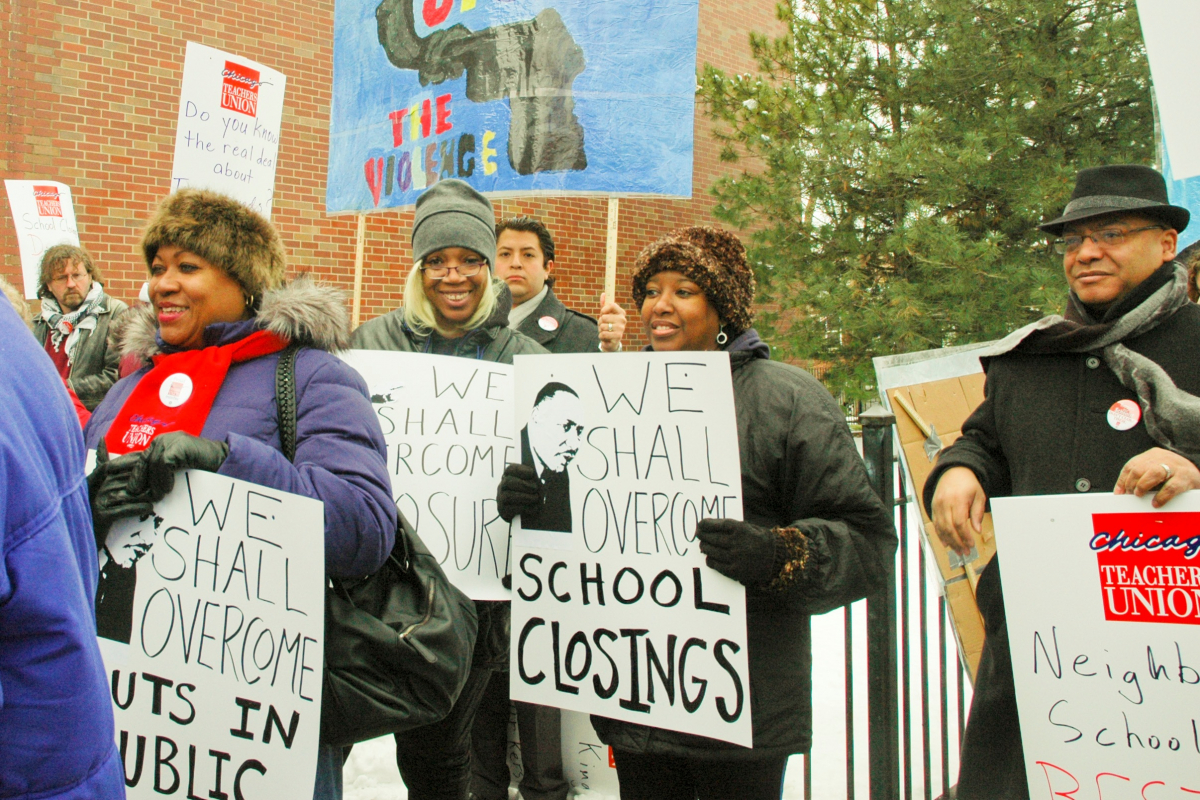 Chicago teachers protested school closings in largely Black neighborhoods. Due to the rampant closures, Black teachers dropped from nearly half to just 26 percent of the workforce in five years. Photo: CTU.

Chicago’s Black students are sitting in a front-row seat for the devastating policy of privatizing our schools.

Black students and Black educators have shouldered the weight of nearly 20 years of school closings, as many of our neighborhoods turn into “school deserts,” with no traditional neighborhood schools left.

Between 2001 and last year, 42,000 Chicago students were victims of school closings and “turnarounds,” where the entire staff of a school is fired. Eighty-eight percent of students affected were Black. And last year, when Mayor Rahm Emanuel closed 50 schools, almost the same number of students again were affected—this time not over a decade span, but in a single year.

Three out of four of these schools were in poor neighborhoods and intensely segregated, their student bodies at least 90 percent Black and with at least 75 percent qualifying for free or reduced-price lunch.

Many of these neighborhoods are home to demolished public housing sites. They have the lowest median family incomes in the city. Students already face a mountain of challenges outside school: housing crises, lack of jobs, poverty, segregation. School upheavals destabilize their lives even further.

When their old school closes, students are sent to a school that may be several miles away. Families struggle to navigate new transportation routes. Children sometimes have to cross rival gang territories, putting them in harm’s way. Bonds are broken. Students have to regain trust in their teachers and their classmates, and that takes time.

And studies show the closings, on average, don’t help student achievement—in part because displaced students tend to land in schools just as under-resourced as their previous schools.

A University of Chicago study followed students hit by Chicago’s 2001-2006 elementary school closings. It found that their test scores suffered the year before the closing, when students, parents, and school staff were dealing with the jarring announcement of what was about to happen.

After the move, the average student managed to catch back up in a year or two, but only to where scores would have been if the school hadn’t closed in the first place.

A new study released May 22 by CTU, ”Twelve Months Later,” tracks the impact of the 50 school closings in 2013.

The overwhelmingly Black neighborhoods of Bronzeville (Southside) and North Lawndale (Westside) illustrate how profoundly the policy of closing schools has failed. Both have very few publicly funded, neighborhood schools left within walking distance for families.

The district claimed the closures in these communities would get students out of what it considered “low-performing” schools. But in reality, 40 percent of displaced students wound up at schools that were in the bottom performance ranking, Level 3. Only one in five students enrolled at Level 1 schools.

Nor has the district’s chaotic policy helped the few schools that remain. Three-fourths of the district schools in Bronzeville and North Lawndale are on probation status this year.

Meanwhile, charter schools proliferate, but they’re not helping Bronzeville and North Lawndale. At charter high schools there, last year 3.6 percent of students dropped out—twice as bad as the 1.8 percent at district-run high schools.

A March national report from the U.S. Department of Education revealed that Black students are more likely to be suspended, and more likely to have an inexperienced teacher, than white students, including students as young as pre-K. This is especially true in charter schools.

The Chicago Teachers Union (CTU) has highlighted these gross failures in our reports “The Schools Chicago’s Students Deserve” and “The Black and White of Education in Chicago’s Public Schools,” where we argued for including parent, teacher, community, and student voices in decisions about what happens to our schools.

There are schools in Chicago whose student body is overwhelmingly Black but which have few to no Black teachers.

This is because Black teachers are more likely to work in high-poverty schools with high percentages of Black students: exactly the schools most likely to be closed or “turned around” and to fire their staffs.

Black teachers made up almost half of Chicago’s teaching force in 1995. But by 2011, Black teachers were down to 26 percent. That year they made up 65 percent of teachers in the schools that were closed and 40 percent of the tenured teachers who were laid off.

At the time, our contract did not give tenured teachers the right to follow their students to new schools, leaving Black educators especially vulnerable. We won that right in our 2012 strike.

Still, the number of Black teachers will likely continue to decline—harming an already stressed local economy and removing positive examples for children.

To address the loss of Black teachers and support staff, CTU’s Black Caucus is re-emerging. The caucus is working to organize current and retired union members, along with Black workers across the city, to fight the privatization of other public goods such as the postal system as well as schools.

When Chicago’s mayor closed the largest number of schools in history last year, he etched a deep line between those who support public assets and those bent on privatizing them. CTU held a three-day march across the city, singing that our schools and communities deserve investment.

This year in several schools, slates of candidates ran for the Local School Councils, which have the final say on a school’s budget and on hiring of the principal. One of the strongest examples was Ryerson Elementary, where a slate of parents, teachers, and community members won with a platform of opposing over-testing, fully funding neighborhood schools, and protecting their school from charterization.

To change the policy of privatization, CTU recognizes, we must engage politically. The struggle over the control of knowledge is itself a political struggle. And the fight against privatizing our schools turns out to be a struggle against all forms of injustice.

Brandon Johnson is an organizer and deputy political director of the Chicago Teachers Union, and heads its Black Caucus.

A version of this article appeared in Labor Notes #423, June 2014. Don't miss an issue, subscribe today.
Related
As Omicron Rages, Teachers and Students Fight for Safety Measures in Chicago and Elsewhere »
Review: How Labor Can Stop ‘The Privatization of Everything’ »
Teachers Strike against a ‘Heartless’ School Board in Biden’s Hometown »
Puerto Rican Electrical Workers Union Fights Privatization of Island’s Grid »
Chicago Passes Union-Backed Bill for Civilian Oversight of Violent Cops »