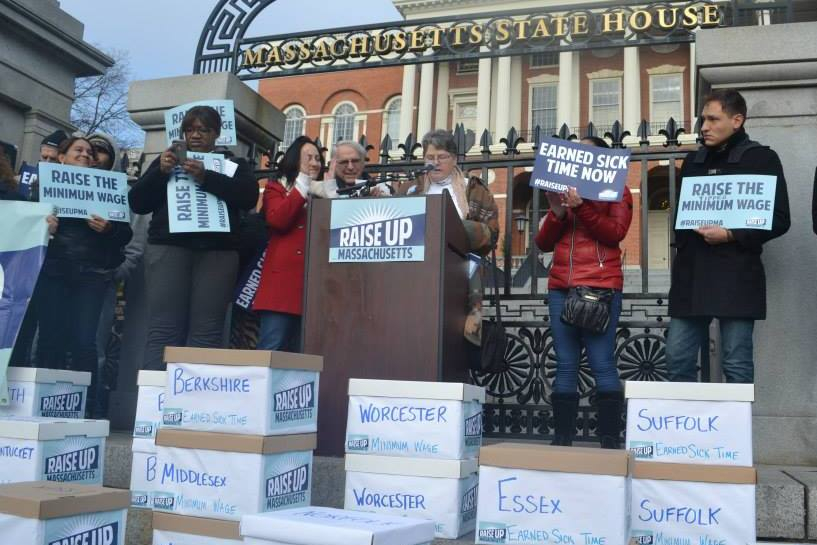 Raise Up Massachusetts delivered petitions to the statehouse in December. The group’s petition drive combined a raise in the minimum wage and paid sick leave. Photo: Massachusetts Jobs with Justice.

A hundred years ago, when government at all levels was captured by corporations and legislation only served their interests (sound familiar?), citizens despaired of representative government and fought for and won a form of direct democracy called “initiative and referendum.”

Under these laws they could circulate petitions to call elections to pass good laws, repeal bad laws, or amend state constitutions.

They used that power to abolish poll taxes, fund higher education, and curb the power of the railroads. Today about half the states and many counties and cities have some type of direct democracy initiative process.

It wasn’t until the 1970s that conservatives learned to use ballot initiatives. They’ve used them to cut taxes on the rich, shrink government, and outlaw marriage equality, among other things.

But labor and community organizations are harnessing the power of ballot initiatives, too. It’s a great way to raise a state’s minimum wage, for instance. Since 1996, 15 ballot measures have attempted such a raise. All but two passed—most by wide margins.

WHY TAKE THE INITIATIVE?

In state legislatures, corporate interests tend to block any and all reforms. Minimum wage boosts and paid sick days run into the power of retail and restaurant associations. Initiatives let us do an end-run around them on these issues—which tend to be overwhelmingly popular with voters, even when bushels of corporate cash are spent opposing them.

But that’s not all. We use the initiative process to build bottom-up. Rejecting the use of paid signature-gatherers and consultants, Russ Davis of Massachusetts Jobs with Justice (JwJ) said, “It’s about building a movement. It’s about getting the working class psychologically over the ‘fact’ that they have to accept a low standard of living.

“It’s about what kind of movement you build when you win the $15 or sick days or the Patient Safety Act. We are trying to shift politics to the left.”

Likewise, Missouri JwJ backs initiatives that fit with a long-term strategy to change the state’s political climate in the state to support organizing. The group analyzes the stakes in upcoming elections and figures out how an initiative can help get the right people to the polls.

At the Labor Notes Conference upcoming ballot initiatives in Massachusetts and Missouri were discussed in a workshop. These new laws would:

The workshop audience brought in the SeaTac, Washington, vote last year that raised the minimum for airport and related workers to $15; the current Seattle fight for $15; and various campaigns to improve public transit.

It takes a coalition to win. Even if polling is overwhelmingly in your favor, even if the initiative appeals to popular working-class issues, you will face well-funded opposition. You will need broad, active participation both for the labor-intensive signature-gathering and for the campaign at election time.

JwJ, MNA, the Transit Union (ATU), and the SeaTac coalition all work with supporters from unions, community organizations, and faith-based organizations to raise money and recruit volunteers.

State laws require signatures from geographically diverse areas, so networks must recruit volunteers outside of the cities where they are often based. MNA has reached out to students. MNA member Donna Kelly-Williams said, “They get it… The next generation seems to be more on board and progressive. They understand that we need to raise everyone up.”

Raise Up Massachusetts, a broader coalition of community, labor, and faith groups, gathered 280,000 signatures for the minimum wage and paid sick days. Missouri JwJ and its allies turned in 350,000 signatures on two initiatives in 2012.

The opposition has slick moves. Missouri JwJ learned this in 2012 when we tried to raise the state minimum by $1 and cap payday loan rates. We were forced to withdraw both measures when anti-initiative forces found a loophole that was insurmountable in the few days we had left before the filing deadline.

One common trick is pitting one group against another. Davis said the Democratic-controlled Massachusetts legislature tells them they can’t get more than one reform per year—though they never seem to get any.

JwJ gets requests for support from activists on many different issues, of course. So in 2013 the group decided to link paid sick days and minimum wage in a coalition effort called Raise Up Massachusetts, which got overwhelming support from petition signers.

Another maneuver is cooptation. In Seattle, the mayor is helping the Restaurant Association to water down the demand for a $15 minimum. One workshop participant said Seattle business knows some kind of minimum wage hike will happen, so it’s trying to insert things it wants, like a lower minimum for tipped workers (which does not exist in Washington now).

Or business will try to include total compensation in the minimum, which would actually cut the pay of some people who now get benefits. The danger is that some unions supporting the raise will accept such concessions.

In Missouri, now that the early-voting initiative looks like it’ll make the ballot, Republican legislators are proposing their own weaker version to confuse voters, plus a separate voter ID initiative.

People will back what’s good for all workers. In 2012 village leaders in Weston, Wisconsin, abolished its bus service. But in June that year, the citizens of Weston voted by 68 percent to reinstate the buses—even though 70 percent didn’t use them, and an overwhelming number were voting not to recall Republican Governor Scott Walker in that same election.

The ATU called the campaign “Everyone needs a ride.” It wasn’t about the jobs of union members; it was about the common good.

Judy Ancel is a labor educator at the University of Missouri-Kansas City and a leader in Kansas City Jobs with Justice.

To find whether your state allows initiatives and the rules for them, check the website of the National Conference of State Legislatures. For local initiatives, check city and county charters.

A version of this article appeared in Labor Notes #422, May 2014. Don't miss an issue, subscribe today.
Related
VIDEO: Health Care Strikes During a Pandemic »
We Need Democracy on the Job and in the Union, Too »
2020 in Review: Workers Struggle Under the Weight of the Pandemic »
Why Did California's Tax the Rich Measure Lose? »
Viewpoint: This Election Shows Labor's Ground Game Matters (Especially During a Pandemic) »