Teachers Elect Foes of Corporate Reform in Massachusetts and L.A. 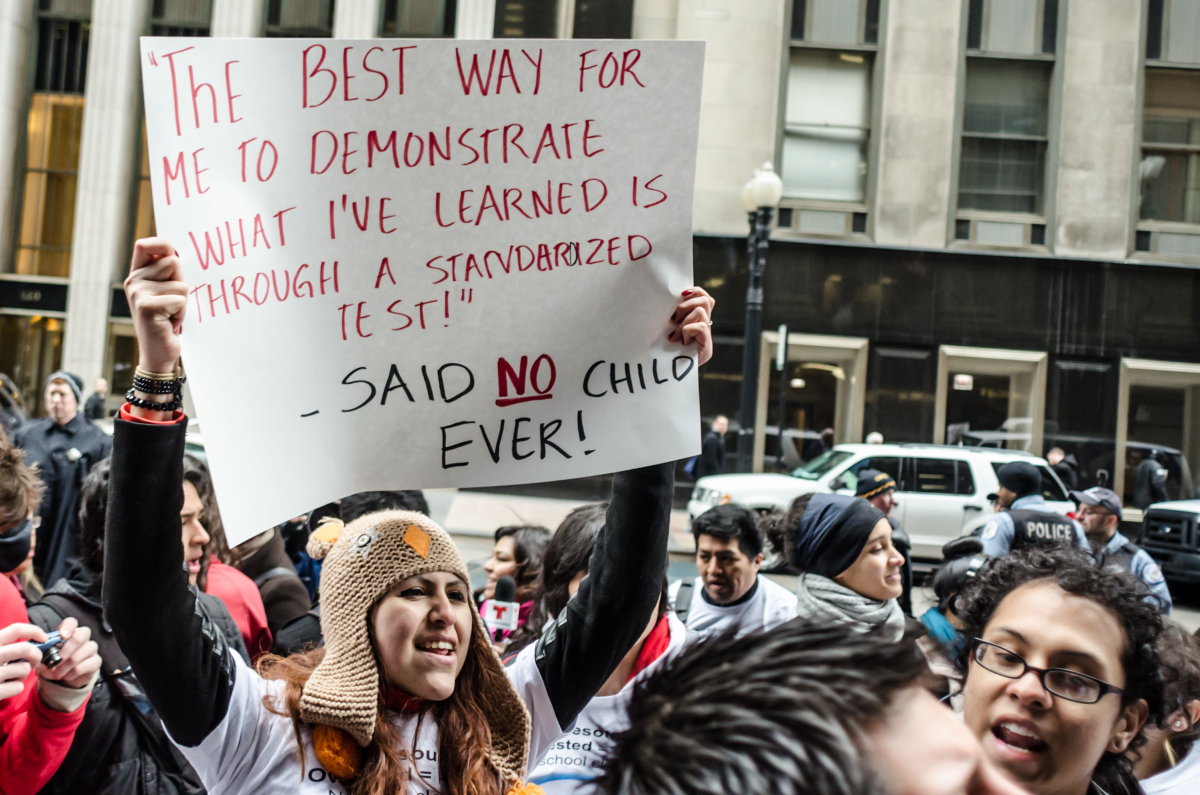 The new statewide president of the 110,000-member Massachusetts teachers’ union made her name leading a boycott of standardized tests.

Barbara Madeloni was running the teacher education program at the University of Massachusetts in 2012 when she led her student teachers to boycott a pilot standardized assessment for teachers-in-training. The boycotters opposed outsourcing teacher evaluation to the testing giant Pearson, preferring that experienced educators observe student teachers.

Madeloni was elected by a vote of 681 to 584 delegates at the Massachusetts Teachers Association’s May 10 convention. The MTA includes 100,000 K-12 teachers and 10,000 higher education faculty and staff, including at the University of Massachusetts.

Madeloni ran with the Educators for a Democratic Union caucus, campaigning on the promise to engage teachers in the fight against over-testing students. She argues teachers’ and schools’ futures are being unfairly linked to the tests.

Holyoke teacher Gus Morales, a first-time delegate, came to the convention to vote for Madeloni and support EDU’s agenda.

“From the time we got there Friday morning, the feeling was there,” he said. “It was electrifying.”

Working closely with Madeloni and EDU, Morales recently won the union presidency for his home district. Last year he brought a dozen teachers from his high school to hear Madeloni speak. At the time he knew her by her reputation for standing up to Pearson.

“In a city that is poverty-stricken, how we can spend more money on testing?” Morales asked, describing his district. “Our students and our teachers are suffering right now, and no one seems to care.”

Los Angeles teachers also recently voted in a new slate of leaders who aim to rein in corporate-style education reform. Alex Caputo-Pearl clinched the presidential spot in a runoff in April, after the rest of the Union Power slate was elected in March, winning control of the union’s executive board.

But in Seattle, in a 1,342 to 1,297 vote tallied May 8, high school teacher Jesse Hagopian lost a presidential bid. Hagopian led a standardized test boycott at Garfield High last year sparking national support from teachers and, eventually, from both national teachers unions.

Hagopian’s caucus, Social Equality Educators, did win five of nine executive board seats. Its treasurer candidate, Dan Troccoli, is in a runoff.

All three caucuses campaigned with a vision similar to that of the CORE caucus that won office in the Chicago Teachers Union in 2010. They vowed to fight for better schools and work with parents and community groups in addition to defending benefits and job security—and to mobilize members instead of relying on closed-door negotiations.

Massachusetts, Seattle, and L.A. teachers were among a hundred who gathered at a teacher conference CORE hosted last August. They met again at the Labor Notes Conference in April. The topic: strategies for damming the deluge of attacks on public schools, including school closings, mass layoffs, pension cuts, and ramped-up standardized testing.

Anti-testing sentiment is on the rise nationally, with parents, students, and teachers organizing opt-out campaigns. Teachers boycotted standardized tests at Chicago’s Saucedo Academy in February and at Brooklyn’s International High School at Prospect Heights in May.

The federally-developed Common Core curriculum is likewise drawing ire. In a May 7 resolution the Chicago Teachers Union vowed to lobby against Common Core, which is being implemented state by state. They argue it increases the emphasis on testing and gives for-profit education groups, rather than classroom teachers, power to determine what schools teach.

The American Federation of Teachers and the National Education Association have been supportive of Common Core standards. They’ve only recently begun to raise red flags, now that the implementation is proving unpopular with many teachers. Madeloni has also been outspoken against Common Core.

BURNED BY THE UNION

Although EDU teacher activists were confident about their voter turnout, to many, Madeloni’s victory was a surprise. She defeated the MTA’s incumbent vice president—a job that has often been a steppingstone to the presidency.

EDU activists credit their victory to months of recruiting new teachers to their caucus. They got the word out about their candidate in an eight-month campaign, visiting 80 Massachusetts teacher locals out of 400.

Prior MTA conventions have had spotty turnout, so the caucus pushed to bring new delegates to this year’s meeting to vote for Madeloni.

Many Massachusetts teachers felt burned by their union in 2012, after MTA officers negotiated with legislators and the business-backed group Stand for Children to weaken teachers’ seniority rights. The union tops’ defense: the compromise would lessen the inevitable blow of a Wisconsin-style attack on public sector workers.

At that year’s MTA assembly, 45 percent of delegates voted to reject the deal. After it was approved, outraged EDU members invited teachers to plan a campaign against the status quo. They flew in Chicago teacher activists to share ideas from their organizing.

When Madeloni spoke to delegates before the presidential vote, she reminded them about the 2012 deal. “This is what we get when we think power lies in personal access to the political arena, in talking to them, rather than in mobilizing our membership,” she said.

“When Stand for Children comes back for the next fight, or political allies come after our pensions, do we want once again to cut an inside deal and declare again, ‘It could have been worse?’”

Correction: This article has been updated to reflect that not all MTA's higher education members work at the University of Massachusetts, and to clarify the definition of high-stakes testing.