Getting Off the Grievance Treadmill 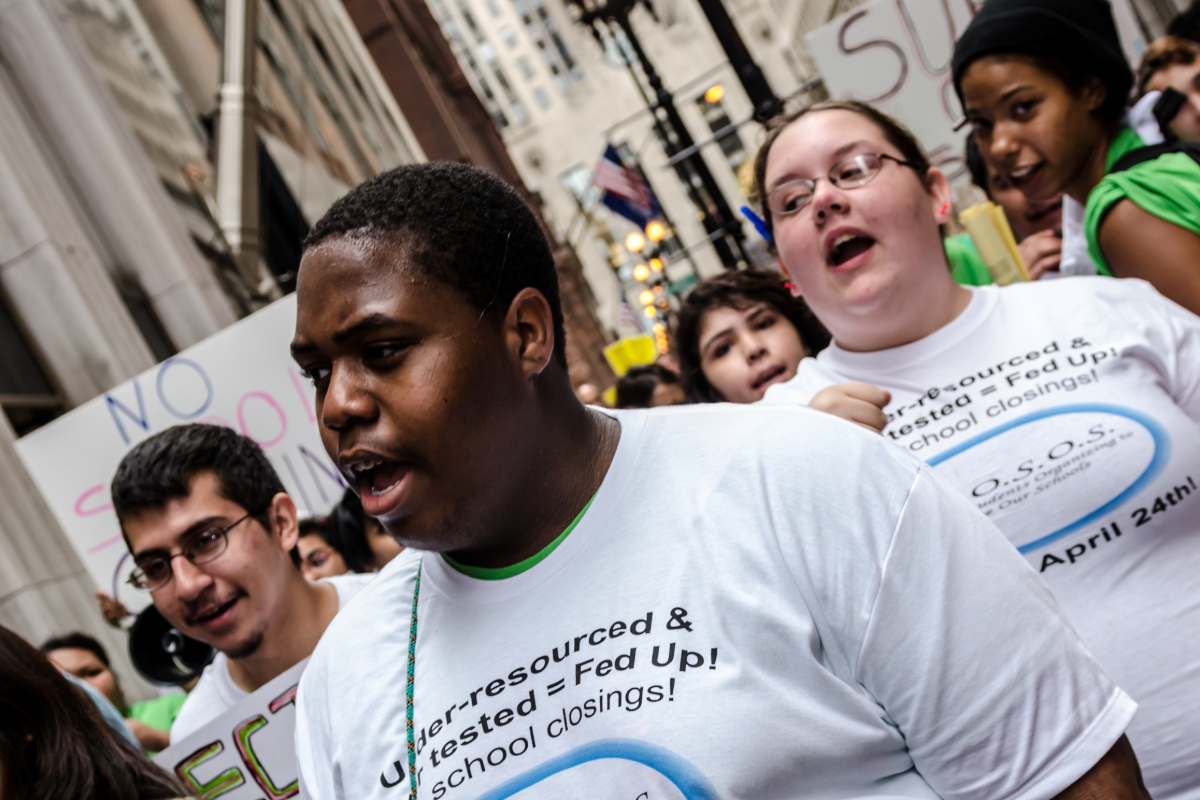 In February 2010, Chicago Teachers Union (CTU) members at my school were confronted with a new and inexperienced principal determined to operate on a tight budget.

But union members know that grievances can take too long to resolve, put us on defense instead of offense, and take the initiative and control away from workers and into a legalistic “procedure.”

So for the past four years we’ve been turning our grievances into organizing tools. We’ve been mobilizing workers and the community around our grievance issues.

START WITH A SURVEY

Not every problem that requires a grievance is right for mobilizing allies and heightened action. Besides the four criteria listed in the box, the steward can also use a survey to decide which issues to organize around.

The survey should be short enough to complete quickly. It might be as simple as a list of problems that a member can rank in order of importance, or a few statements to check whether she agrees or disagrees.

The survey should have a “Comments” section where members can express their views in their own words—you will get some great slogans and new perspectives on a problem from these comments. Give members the option to share their identity or remain anonymous.

A good organizing issue should:

—Carl Biers and Judy Sheridan-Gonzalez, New York State Nurses, from the “Getting Off the Grievance Treadmill” workshop at the Labor Notes Conference.

In our February 2010 survey, the three items most often marked as big problems were “Unfilled Teaching Positions” (the principal was using substitutes in 20 classes), “Copier Availability” (teachers were now limited to 500 copies a year), and “Discipline,” which is tied to student and staff safety.

New people in the Discipline Office did not even file, let alone act on, referrals that staff filled out, leading to at least two assaults on teachers (including an attempted poisoning).

We learned that the staff was deeply concerned about these issues—and we knew that parents and students would care, too. We were right in a bigger way than we could have imagined.

You cannot organize in the workplace, though, unless people feel secure communicating with those spearheading the organizing. So we created spaces—both virtual and physical—where members felt safe sharing information and planning with each other.

We first set up a non-workplace email list, coordinated through the steward, where all members received and could respond to organizing updates.

Just as important has been the re-creation of the Teacher Lunchroom, where members socialize during lunch and where we hold union meetings after school, into a real union hall.

Our steward Eric Wagner has filled the walls with blown-up copies of articles about our activism, framed posters and pictures from the September 2012 CTU strike, and other union materials (including Labor Notes).

Every union member who walks into our lunchroom knows immediately that she is among friends, while any enemy learns just as quickly that we will always act to defend our school and students.

Once you’ve chosen the right issue to organize around, and created an environment where people feel welcomed and secure, then it is possible to ask members to publicly speak up.

Our initial action against a hostile boss was a simple petition in April 2010, addressed to our principal’s superior officer, explaining our grievances and asking for assistance. What gave this piece of paper its impact was that it was signed by more than 90 percent of the school’s tenured teachers. (We told the more vulnerable non-tenured teachers they were not expected to sign, though several still did.)

The principal’s boss soon sent his special assistant to a meeting with the entire faculty—from which the principal was excluded—to help resolve the problems.

Because we had done so much communication through emails and face-to-face conversations, every one of the 65 teachers who attended knew instinctively what he or she could contribute. When the special assistant tried to show that reading instruction was adequately funded, our literacy coach pointed out that he was looking at the wrong account in the school budget.

When the issue of safety was debated, the teacher who had almost been poisoned with sulfuric acid shared his story (including how the principal had tried to blame the incident on him).

This was a watershed moment for our school, in which the experience and expertise of the entire staff, not just that of a couple of leaders, was demonstrated to the bosses and to each other.

In Chicago all public schools have Local School Councils that meet monthly to oversee a school’s operations. Parents, students, and community members make up the majority of the LSC’s 13 members, which also include teachers and the principal.

We made sure teachers not on the LSC came out to every meeting. We kept the LSC informed about our concerns and all our grievances, surveys, and petitions. Soon, teachers were not alone—nor even the loudest voices—in calling for more resources and a safer school.

In May 2010, 150 students at our school staged a midday walkout and protest. Chanting their demand that the principal hire more teachers, they chained themselves to the school fence and held aloft posters.

Teachers had no involvement in this civil disobedience, despite school officials’ efforts to blame it on rogue members. The walkout represented a recognition by the young people we teach that our struggle is also their struggle. When certain students were targeted with suspension, teachers protested at the LSC meeting.

Four months later, three parents (including the LSC president) and their children attended the Chicago school board’s monthly public meeting to speak against the principal’s attempt to save money by defunding our school’s extracurricular programs.

We prepared a documented history of the principal’s mismanagement, which the LSC president presented. Because the action involved students and parents, not just teachers, the board felt more pressure to quickly resolve the problems.

This general pattern of escalating actions has been repeated several times at my school over the past four years. We don’t organize around every grievance issue, nor do we win every one of our demands. The board continues to underfund and destabilize neighborhood schools, often by installing inexperienced principals who are not trained in how to respect the rights of staff.

But what we have accomplished by organizing around grievances with our non-union allies includes:

Most important for the union members at my school is that organizing for action has kept us united. A recent University of Chicago report on my school rated Teacher-Teacher Trust a “strong” 67 out of 100, while Principal-Teacher Trust was rated 1 out of 100.

The very knowledge of such solidarity is the best defense against any hostile boss.

Jerry Skinner is LSC teacher representative at Kelvyn Park High School. He was a presenter in the Labor Notes “Getting Off the Grievance Treadmill” workshop.

For more on how Kelvyn Park teachers transformed the union culture at their school, get How to Jump-Start Your Union: Lessons from the Chicago Teachers.

A version of this article appeared in Labor Notes #422, May 2014. Don't miss an issue, subscribe today.
Related
What Today's Union Reformers Can Learn from Miners for Democracy »
2022 in Review: Harsh Conditions, Good Surprises »
Frustrated Over Contract, Locomotive Engineers Vote to Oust President »
Rail Machinist Opens Bid for District Presidency »
Every Union Contract Right Now Should Be the Best Ever »