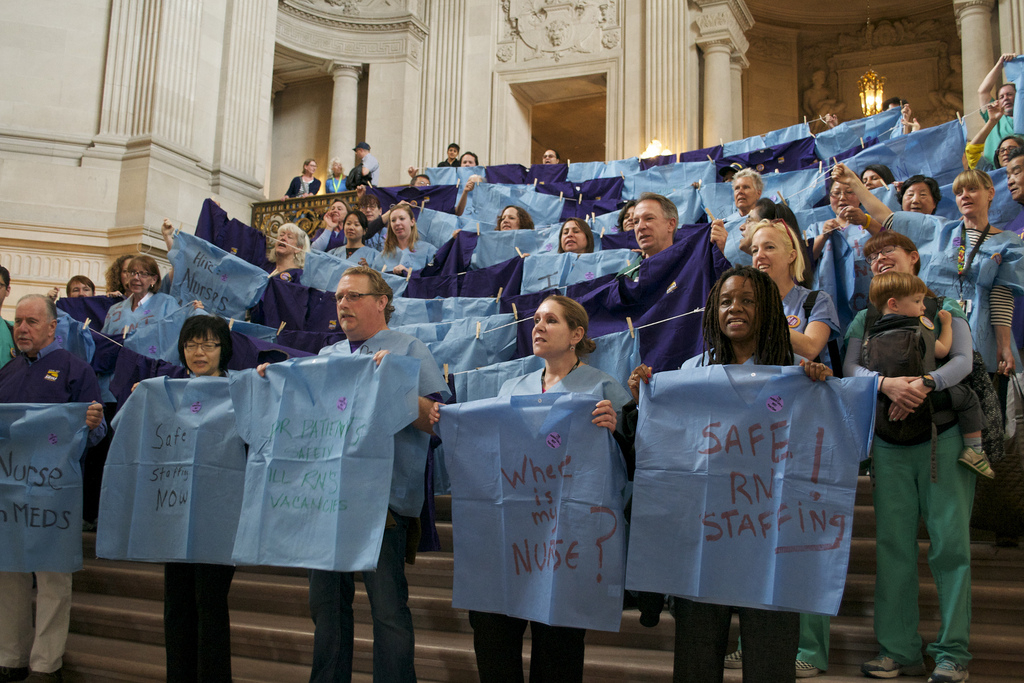 San Francisco General Hospital Nurses assembled inside City Hall on May 20 after being locked out of the mayor’s office. The “empty scrubs,” represent the nursing jobs that need to be filled at their hospital. The missing staff means danger for patients. Photo: SEIU 1021

“It’s locked!” Norlissa Cooper exclaimed incredulously to a contingent of several dozen other nurses from San Francisco General Hospital. The nurses were attempting to open Mayor Ed Lee’s office door May 20 to discuss with him the critically high staffing shortages at their hospital.

The premier public hospital has the city’s busiest emergency room and its only Level 1 Trauma Center, which is supposed to provide the highest level of care. Overall, it serves some 100,000 patients each year, providing 20 percent of the city’s inpatient care.

And yet it’s “severely understaffed and our patients severely underserved,” says Lorraine Thiebaud, a nurse for 40 years and RN chapter president in Service Employees Local 1021.

The union will vote in early June whether to strike over the staffing violations. Their contract expires June 30.

“This has to be a first,” Cooper said about the mayor’s ducking out. “Since when is the public office of the mayor locked up in the middle of the day? Certainly not when the mayor meets with wealthy executives from Twitter and Google.”

Cooper, a member of the union’s bargaining committee, was referring to regular Tuesday meetings the mayor holds with leaders of high-tech companies that have been granted big and controversial tax exemptions and even free use of city facilities.

It was this “tech troubleshooting” meeting the union nurses were hoping to crash on Tuesday, Cooper said, “so we could ‘troubleshoot’ the problems of our poor, immigrant, and underprivileged patients.”

The mayor’s office did not respond to requests for a statement but hospital spokeswoman Rachael Kagan said staffing levels at San Francisco General are safe and meet all the requirements of federal and state regulators and accreditation organizations.

"We do have vacancies, as do all hospitals," she said. "We take it very seriously, but it's not a crisis of public safety by any stretch."

The nurses disagree and say they can document how the city is violating not only its own staffing standards but also those of California’s landmark 2004 legislation establishing specific nurse-to-patient ratios. The law says hospitals must provide at least one nurse for every five patients—or fewer patients if they need more care.

The California Nurses Association led efforts for a decade to pass this legislation—against intense lobbying by hospital executives. It is supposed to be enforced by the California Department of Health Services.

But the numbers are simply not being achieved at San Francisco General, say the nurses, and it’s seriously affecting care.

“When those ratios are ignored, patients suffer,” said Heather Bollinger, an emergency department nurse. “Patients go unattended. They fall. Their pain medication gets delayed. They get sicker.” The union estimates a 26 percent nurse shortfall in the emergency room.

Reports from the Floor

January 30, 2014: Medical/Surgical: “Unit has been short staffed for several weeks because of RNs being floated to other units. There is often a 1:5 patient ratio that is out of compliance with Title 22 regs (should be 1:4).”

The union says the city's primary safety-net facility has been chronically understaffed since early last year and that its 13.7 percent vacancy rate for registered nurses and "other front-line staff," as reported by the city Department of Public Health, is putting patients at risk.

Nurses have filed 300 official reports in the last two years, detailing unsafe conditions, but there has been no response from hospital management.

“We are anywhere from 90 to 230 nurses short of where we should be,” said emergency room nurse Bob Ivory, citing union research. The union just released a report, “Empty Scrubs and Overflowing Beds,” documenting their claims (see box).

Patients even disappear. The hospital made international headlines last year when a missing patient’s body was found after several weeks in a remote hospital stairwell. In February, a mentally unstable patient who was left unsupervised attacked another patient who was 93 years old.

Two days after the protest at the mayor’s office, the union filed an unfair labor practice charge, stating that “wholesale repudiation of the staffing standards in the collective bargaining agreement… is contaminating the bargaining process” and creating impossible workloads which are damaging patient care.

The puzzling part of this whole “hot mess,” as Cooper describes it, is that the city has already allocated funds in its current budget to solve the crisis.

The city Controller reported this year that the San Francisco Health Department is predicting a $46.3 million budget surplus this year, with $16.6 million of that stemming from salary savings at San Francisco General over nine months. The hospital itself reports a budget surplus of $26 million.

Then why isn’t it hiring?

Some health activists speculate that the mayor enjoys padding his much-ballyhooed budget surplus by complicating and slowing the hiring process. The union’s report notes that only one nursing position is listed on relevant jobs website.

Ivory, who has been nursing since 1982, believes it might be more “politics than economics, because the money is there.” He testified at the city’s health commission, so far without results.

Meanwhile, he said, patients are in hallways waiting for beds, or are even diverted to other hospitals. This is costing the city $1.4 million a month in fees paid to other care facilities, Ivory said. “That could be spent on staffing us.”

Carl Finamore is a delegate to the San Francisco Labor Council and can be reached at local1781[at]yahoo[dot]com.