Wish You Were There! 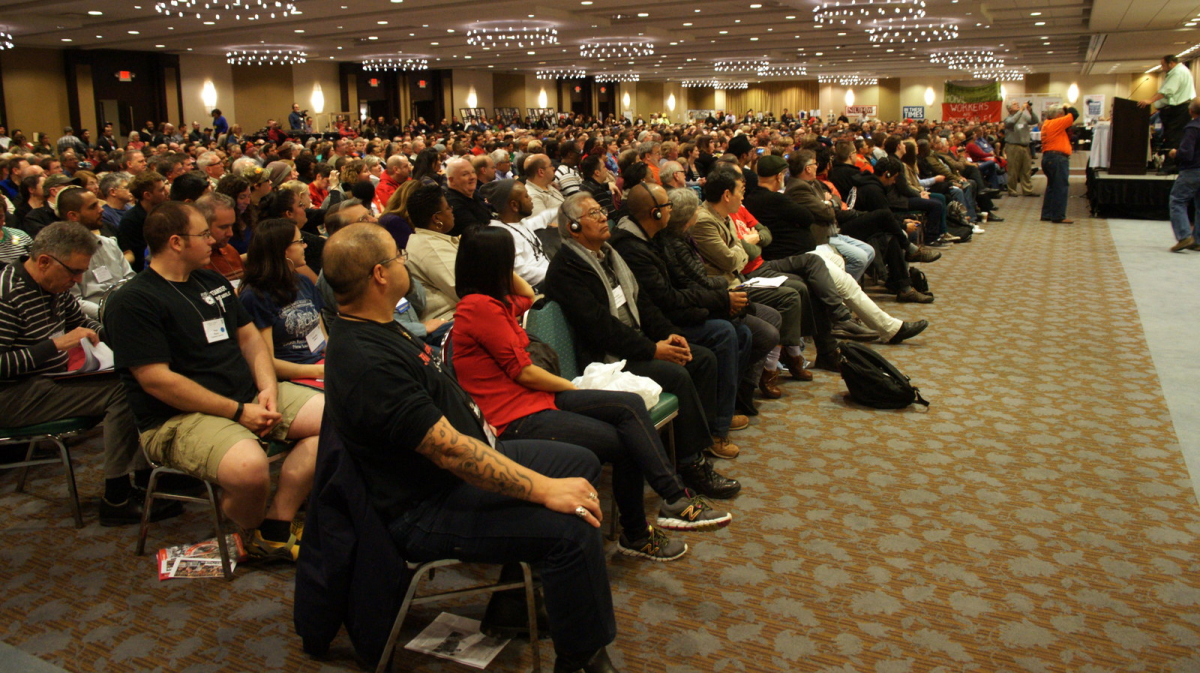 UPDATE: Check out videos here, and the photo gallery plus additional videos here.

The 2014 Labor Notes Conference was the largest yet; we’re estimating 2,000 attendees, but it could be more once the counting is done. The spirit was also the greatest yet. Though labor’s official numbers are declining, its troublemaking wing seems to be gaining confidence.

Participants attended 140 meetings, films, and workshops spread over three Chicago hotels. At the fundraiser, pledgers gave $1,000 each in memory of Pete Seeger and Pete Camarata. A lunchtime demonstration took picketers to a nearby Staples to say no to privatization of the people’s post office.

Here are a few quotes from conference speakers and attendees. Stay tuned for more.

“The same boot that’s on your neck is part of a matching pair, the other one of which is on my neck.”—Kimberly Bowsky, Chicago Teachers Union

“You get to a point where they keep pushing you and you've got to push back.”—Tom Oliver, Teamsters Local 804, New York, one of the drivers fired by UPS for showing solidarity with a fired member

“It was very difficult to make a decision about striking. It was harder to than asking my wife to marry me. That was one person. Striking was about asking 200 people!”—Stephan Chan, Hong Kong Dockers Union

“In history, dissatisfied workers in the streets are not to be toyed with.”—Kimberly Bowsky, Chicago Teachers Union

“I told myself I would come out of the shadows every day if I had to, because I was a human being and I had a right to be happy.”—Reyna Wences, Immigrant Youth Justice League, Undocumented Illinois

”One consequence of the Moral Monday movement we weren’t expecting has been the founding of all-white chapters of the NAACP in western North Carolina. The movement’s slogan is ‘Forward Together, Not One Step Back!’”—Ajamu Dillahunt, Moral Mondays

On the other side:

"I attended a great Labor Notes class on using our own internet radio to reach our members and the public. It's so hard getting our story in the press—I learned how we can build our own media.”—Shelley Martin, Vermont State Employees Association

"I'm loving this conference! The good vibes are overwhelming. Labor Notes brings together people who want to see something different in this country—and it gives us the tools to make it happen."—Marva Wade, RN, New York State Nurses Association

“Very thoughtful and soulful! It showed the need for more explicit discussions of why we do the work we do.”—Peter Olney, ILWU, on the workshop “Can Labor Change the World? Intergenerational Exchange”

"I'm working with nurses to negotiate a first contract and we're up against the largest for-profit hospital chain in the country. It's a huge challenge. We can't look at our individual struggles in isolation. This conference has deepened my conviction that we have to build a larger social justice movement to win our fights."—Michelle Mahon, RN, National Nurses Organizing Committee, Ohio