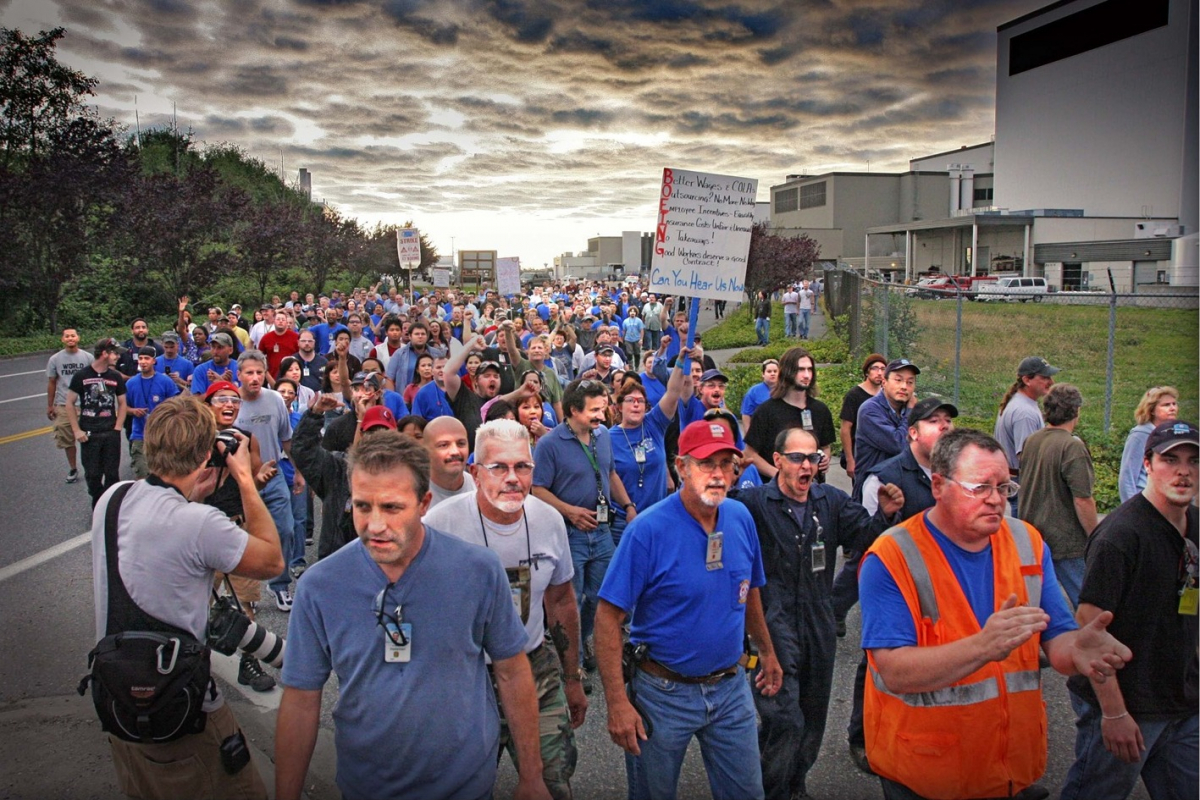 When Machinists President Thomas Buffenbarger intervened to foist concessions on the union's largest district, at Boeing, he added fuel to his opposition's fire. A rank and file vote for top officers will be held this spring. Photo: Don Grinde.

For the first time in more than 50 years, the Machinists union (IAM) will hold a contested election for top officers. The vote was ordered by the Department of Labor after member Karen Asuncion protested violations in the union’s 2013 uncontested election.

An opposition slate, IAM Reform, is headed by former Transportation Coordinator Jay Cronk. Cronk is a former officer because he was fired, after more than 20 years at the International, eight days after he announced his candidacy.

IAM Reform’s platform focuses primarily on internal functioning: nepotism, wasteful spending (a Lear Jet for international officers), high salaries ($304,000 in total compensation for President Thomas Buffenbarger), and excessive numbers of international officers, some of whom were appointed without ever having been an IAM member.

But since the initial appearance of the reform slate, under the pressure of events—principally the big showdown over concessions at Boeing—its nature has begun to morph into a broader opposition to concessionary contracts.

The membership vote will be held some time before June.

Getting on the Ballot

For a slate to get ballot status, it must be nominated by 25 lodges (locals). This requirement has been a high bar, since the international holds most of the threads of communication in its apparatus.

More than 900 lodges are scattered around the U.S. and Canada in rail, aerospace, airlines, forestry, and other industries. Their contact with the international usually is restricted to one staffer. Unless a lodge routinely sends an officer to district or international conventions—which, because of cost, only large ones tend to do—isolation is the rule.

The Department of Labor (DOL) ordered local lodges to hold two nomination sessions in January and February. The incumbents were nominated in more than 600 lodges without opposition, generally after an officer put forward their names. Nominations were contested in 83 locals and IAM Reform won more than 25.

The DOL was supposed to oversee the nominations—but in my lodge’s case, most likely because of its troublemaking reputation, the IAM District sent a General Chairman, and I cast my nomination under his watchful eye. IAM Reform reported that the Grand Lodge (the International) went into all-hands-on-deck mode, ordering every staffer to attend a nomination session if possible.

(The DOL had found that in the 2013 election, members were denied a reasonable opportunity to nominate candidates. It was alleged that the Executive Council misused union funds by dispersing the entire staffs of both Grand and District Lodges to unduly influence and coerce local lodges to support the incumbents. The Executive Council also nominated candidates who were not IAM members.)

Fight against Concessions to Boeing

Jason Redrup, business agent for Lodge 751a and now a candidate for vice president on the IAM Reform slate, described what transpired at Boeing:

Even though we had a contract in place through 2016 and our District strongly objected, our International ordered a vote on a concessionary offer be held on Jan. 3rd, knowing thousands of union members would be on vacation and unable to vote.

This vote was ordered after many members had already begun their holidays, and the International refused to move the vote just one business day.

With nearly 8,000 members not voting, we are now forced to live under a contract that eliminated pensions for all, more than doubles health care costs, slows wage growth by 75 percent and keeps us from returning to the bargaining table until 2024. This came not when Boeing was hurting, but enjoying record profits and backlogs…

After the first vote on November 13, when the workers at Boeing rejected the contract by a two-thirds majority, we were called back to have conversations with the company. But we were brought back under false pretenses…The company’s new offer did not move in any substantial way from the first offer rejected on Nov. 13. There were just minor changes—a second bonus 6 years from now and $500 more in dental 6 years from now with another $500 10 years from now. But really, in the opinion of the leadership of our local union, there were no real changes to the offer that the members had already rejected.

Tom Wroblewski, our District 751 president, told our members that we’re not going to vote on an offer that did not significantly improve upon what we had already turned down…Less than 30 minutes after we left this meeting, we read in the Seattle Times that there was going to be a new vote on the last Boeing offer. This had been announced by Rich Michalski, the representative of IAM President Tom Buffenbarger…

We knew that between 2,500 and 3,000 union members were still on vacation and would not be back at work till that Monday…[They] also happened to be, by and large, the members who had more time with the union, a lot of seniority, understood the pension issue, had been on strike numerous times, and knew what was at stake with the new supposedly improved contract …With their participation, the contract would most likely have been defeated.

Keep in mind that the outcome of the vote itself was extremely close, with 51% of those who voted supporting the contract proposal (because nearly 8,000 didn’t vote—in reality 38 percent accepted the concessions we have to live with for the next 10 years)…

More than 50 members of District 751 have filed charges with the NLRB on the scheduling of the second vote on concessions.

It was the Grand Lodge’s intervention in the IAM's largest locals—forcing mid-contract concessions on Boeing workers in December—that lit a fire under IAM Reform’s campaign, and recruited new candidates to the slate.

The executive board of Lodge 751a, at 18,000 members the union’s largest, subsequently voted to endorse IAM Reform, and Jason Redrup and Patrick Maloney from Boeing joined the slate.

All four lodges of District 751 voted to nominate IAM Reform.

The pension concessions at Boeing jarred the entire labor movement. If this immensely profitable corporation, with thousands of airplanes on back order, could end pensions for new hires and freeze contributions to current employees, how could beleaguered public employees of cash-strapped cities and workers at less profitable companies maintain their pensions?

Indeed, politicians in Washington state immediately cited the Boeing precedent to demand that public employees there give up their pensions.

In the midst of the coercion last fall, District 751 member Shannon Ryker set up a Facebook page, Rosie’s Machinists 751, that soon became an online gathering place for members unhappy about the concessions and the IAM leadership. As a result of discussion there, the Rosie’s Machinists 751 caucus has been formed.

Ryker said, “The purpose is to establish a community of support for union members. We want to have a strong network in place—we need to be prepared the next time we're faced with threats, ultimatums and public pressure. We need to have a response plan established, so when they try something like this again, we’ll have support.”

Recent history has shown that given the institutional and financial advantages of the labor officialdom, it is extremely difficult to challenge incumbents in control of the union machinery. The International has no interest in informing members about the rerun election.

Indeed, the members of my local first heard about it from me, a recently retired former officer on Jay Cronk's email list. Will the IAM Journal be forced to report on the opposition slate, as the Teamsters’ magazine has had to do under government supervision of their elections? How much on the IAM website will be devoted to the election? For that matter, how many members even check the IAM website? We can be sure that incumbent officers, beholden to the International, will.

So far IAM Reform has relied on the internet and social media. It’s a testament to the value of this medium that the slate has achieved as much as it has. Indeed, in recognition of the threat, the incumbents’ supporters have resorted to a slander campaign against Cronk on blogs and on Facebook, while using false names and phony Facebook friends to troll opposition sites.

The challenge now will be to spread the organization of the Rosie's Machinists caucus across the IAM. The April 4-6 Labor Notes Conference in Chicago is one place to start, and the awakened members of District 751 can provide a strong base. In the long run, whatever the outcome of the current election, it is that organizing effort, which the IAM Reform slate has triggered, which will be the most important result.

Jon Flanders retired in 2013 from the CSX railroad and is a member of IAM Lodge 1145 in Selkirk, New York. IAM members interested in meeting at the Labor Notes Conference can contact him at jonflan[at]gmail[dot]com.

Related
What Today's Union Reformers Can Learn from Miners for Democracy »
Viewpoint: What Message Does a ‘Vote No’ Campaign Send? »
Rail Machinist Opens Bid for District Presidency »
Challengers Win Big in UAW Elections; Presidency Headed to Run-Off »
Every Union Contract Right Now Should Be the Best Ever »