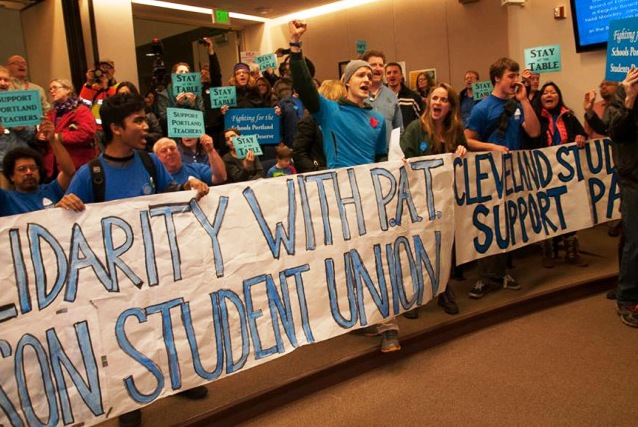 Portland students say their teachers' union is on their side—unlike the school board. They packed a board meeting to demand a fair, student-centered contract. Photo: Bette Lee.

Students made clear that if the district does not settle a fair contract, we would stand alongside our teachers on the picket line. “Stay at the table! Don’t impose!” we declared at the demonstration. “If you do, we’ll strike, too!” The crowd numbered more than 400.

The Portland Association of Teachers (PAT) has been negotiating with the district for nine months. Management can choose to impose its contract at any time.

The district’s original proposal began with 75 takebacks that would grant management more rights than ever. PAT’s initial proposal, “The Schools Portland Students Deserve,” highlighted that teachers’ working conditions are students’ learning conditions. It included proposals that would benefit both, such as caps on class sizes, additional prep time for teachers, and wraparound services for students.

Portland Public Schools said much of that material was “permissive”—PPS was not required by law to bargain over it. So PAT rewrote its proposals, presenting the district with two: “The Student-Focused Proposal” and “The District-Mandated Proposal.” The two parties have made progress in many areas, but health insurance, the hiring process, and workload are still under discussion.

The Portland Student Union is concerned that the district will impose an unacceptable contract, forcing teachers to strike. So the Student Union and the Portland Teacher Solidarity Campaign co-sponsored the “Pack the School Board” event to pressure the board to settle fairly.

After a rally outside, Student Union members shut down the meeting by crowding inside with our banners and listing our demands to the school board members (see the box). Our goals are in line with PAT’s “Student-Focused Proposal.”

Board members, minus pro-union member Steve Buel, quickly left the meeting, refusing to listen to the Student Union.

The national corporate education reform agenda is playing out in Portland through the district’s attempts to bust our teachers’ union. PPS is not bargaining in good faith; it has refused to talk about issues that are important to teachers, to the point that PAT has filed an unfair labor practice.

The district has the Portland Business Alliance on its side, and therefore access to media, which has been incredibly biased. And PPS has all parent email addresses, which it uses to send out information that excludes the teachers’ side.

Students were frustrated that the board refused to listen to us. Jefferson High School Sophomore Sekai Edwards led a mic check after the board members left: “[Superintendent] Carole and the school board cannot make decisions for my education. They are not in the schools every day. They do not have my experiences, and they do not know what I need. If they expect me to respect them, they need to respect me. They need to listen to what I need and what I demand!”

“I think we sent a very strong message to the district and said ‘no’ to a forced strike and ‘no’ to the imposition of their contract,” said Cleveland High senior Ian Jackson.

More than a Contract

This fight is about much more than just a contract. We know there will soon be a contract—we’ll win that fight—but the battle for educational justice is not over.

The contract campaign has opened a much larger discussion about the schools students deserve. Each side claims to speak on behalf of students, but the conversation changes when students actually get involved. Students at Wilson High School walked out to focus on the importance of keeping a cap on class sizes; after that, the district put forth a “supposal” to maintain that cap.

The district and the union have both been attending PTA meetings to speak with parents. The conversation has changed greatly when students showed up and sided with teachers.

“My parents received an email from PPS claiming that their contract was the contract that supported students,” said Jefferson High School sophomore Mikey Garcia yesterday. “How can PPS say that, when we’ve had three student walkouts and seven total student actions in support of the PAT’s contract proposal? Last night was especially telling that the board has their own agenda. They refused to listen to students when we came to their own meeting to speak.”

Edwards said students’ goals are aligned with teachers’ goals—and are very different from the goals of the school board and corporations who want a say in our public education system.

“This district cannot take away my education,” she said. “The rights of the many overweigh the rights of the few corporations making corrupt money on standardized tests and consultants”—a reference to the private consultant PPS is paying $15,000 a month to gut the teacher’s contract.

“[Superintendent] Carole and the School Board, stop claiming that you speak on my behalf!” Edwards insisted. “You are not a student, and you are not dependent on this educational system, but we are!”

Alexia Garcia is a graduate of Lincoln High School and former member of the Portland Student Union.

Related
How Oakland Teachers Took Control of Our Return to School »
Jordanian Teachers Union Leaves Behind Legacy of Wins »
How We Turned Bargaining Around at Law360 »
Pandemic Discrimination Against Asian Americans Has Long Roots »
Draw the Line in Permanent Marker: Three Organizing Principles »