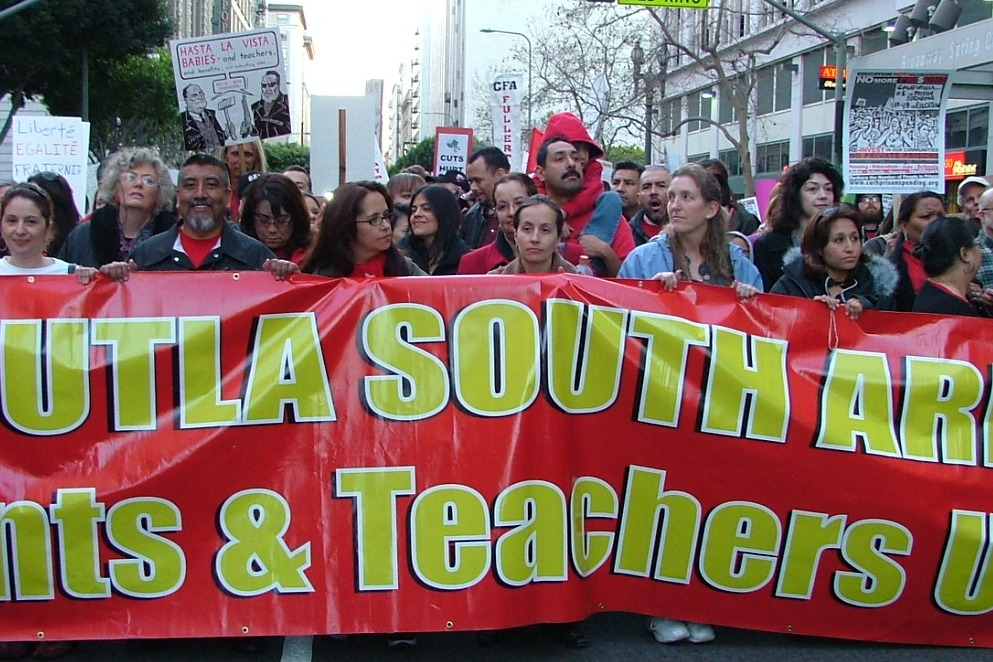 The Union Power slate of activists say the teachers will win community support when they fight for better schools, not just a raise. Photo: Beth Blecherman.

For Los Angeles teacher Alex Caputo-Pearl, if there was ever an example of how his union needed to change direction, it was November’s “Rally for a Raise.”

While he agrees raises for teachers are critical, the single demand rang hollow in light of two years without a contract, teachers still reeling from years of layoffs, hours and hours of standardized tests, and myriad school reconstitutions and charter takeovers.

“We’ve got to put out our own vision for quality schools,” said Caputo-Pearl, who’s running for president in the local’s February election.

A rally focused solely on raises is not likely to inspire parents and community to join in support, according to Caputo-Pearl. Worse, it could play into the argument made by foes of public education, who claim that union teachers care only about their next paycheck and not the best interest of students.

The Union Power slate Caputo-Pearl heads, which is critical of President Warren Fletcher’s go-it-alone vision for the rally, was there with its own message, "It's time for a raise and a whole lot more": fully staff schools and classrooms, and think about what else students need.

Teachers waved signs saying, “A raise would be great but I’ll settle for a nurse and a librarian” and “Kids need librarians, counselors and nurses, not iPads.”

“If we are fighting for good schools, schools that the community will celebrate,” said Rodney Lusain, a Union Power candidate for board of directors, “then the salary, the working conditions, the student-teacher ratios will come with it.”

The district has destabilized its own schools. Since the recession it has been laying off teachers, bringing in charters, and reorganizing with a vengeance. L.A. now has more students enrolled in charter schools than any other city.

The district also recently sank $1 billion into a deal (with Apple and education software company Pearson) to give iPads to every student. The plan has had a bumpy rollout and mixed support.

The Union Power slate brings together teacher leaders who already have experience teaming up with parents.

“What we are trying to do this year is more comprehensive than we ever have done before,” said Rebecca Solomon, one of 25 on the slate. Nine candidates are running for president, but Union Power is the only slate running for all spots.

They have a beef with Fletcher’s approach to the expired contract, which has been to bargain and sign off on contract issues piece by piece. Most recently the union agreed to a new teacher evaluation system. “That has utterly failed,” Caputo-Pearl said. “Small-room negotiations don’t help you in terms of building power on the ground.”

Solomon and Caputo-Pearl were among the founders of PEAC, which now backs Union Power. That group formed in the 1990s, after No Child Left Behind increased the emphasis on tests and on punishing “failing” schools. Members worked with parents to fight against closings and for better schools.

While he was teaching at South Los Angeles’ Crenshaw High, Caputo-Pearl fought the district’s “reconstitution” efforts there. A partnership of teachers, parents, and students sought to improve the school from within.

The efforts built teacher-community bonds, but the district ultimately converted Crenshaw to a magnet school and laid off much of the staff. Caputo-Pearl now teaches at nearby Frida Kahlo High.

PEAC has fought such reconstitutions and charter takeovers around the district. It also helped plan a recent forum on over-testing; a Seattle teacher who’d led that city’s test boycott was among the speakers. The caucus worked with community allies to organize a November rally against the iPads.

“We had to do this without institutional support in nine out of ten cases,” Solomon said of the fights against charters. “So we know what the union could do.”

PEAC is part of a community/labor coalition called The Schools L.A. Students Deserve, formed last year. Working with the Latino Caucus, Coalition for Educational Justice, and other groups, the caucus developed an internal union resolution with the same name.

The resolution garnered enough support to come before members as a referendum, following a process laid out in UTLA’s constitution. Rank-and-file teachers ratified it in February with more than 70 percent support.

It called on the union to mount a contract campaign, starting by working with community groups and parents to identify shared issues. It demanded UTLA put more resources into both member and community organizing, and plan a series of escalating actions.

Fletcher has not supported the initiative with resources, however.

The PEAC strategy may sound familiar to those who know the recent history of the Chicago Teachers Union (CTU). Activists in its Caucus of Rank-and-File Educators (CORE) began mobilizing with parents against school closings even before founding the caucus, doing work their elected leaders weren’t interested in. Later, they ran for office and won.

PEAC and CORE have, in fact, worked together since a 2008 national gathering of reform teachers’ caucuses. And as they prepared for their new roles in 2010, the newly elected CTU leaders visited L.A. to meet with PEAC activists. Back then a PEAC-backed reform slate was represented in UTLA leadership, though it did not have a majority.

The two caucuses’ goals are similar: Get teachers involved in the union at the school level. Work with parents and community. Fight the push for competition among schools, which destabilizes them. The Union Power people see CTU’s campaign for a “better school day” and its report “The Schools Chicago’s Students Deserve” as a model.

Fletcher beat a PEAC-supported candidate in 2010, campaigning on a pledge to focus on teacher pay and benefits and promising to hire a professional negotiator to win a better contract.

This message worked in part because leaders had lost ground in their last contract—right after the 2008 economic crisis brought sweeping cuts to education. They attempted to build to a one-day strike but were blocked by the courts. Teachers were left feeling deflated.

Today, however, the contract has been expired for two years. The union has failed to mount an aggressive contract campaign, let alone challenge district leaders’ punitive model of education or articulate its own vision.

California’s schools are not as strapped for money as those in many states, because the 2012 passage of tax-the-rich Proposition 30—thanks to massive union mobilization—brought in new tax revenue. The funding boost should have been an opportunity to go on offense and tell the public where school funds needed to go, Solomon said.

“We haven’t given the public ‘this is what we think should be prioritized instead of iPads and technology,’” said Lusain.

Nor has the union’s focus on bread and butter helped win a good contract, Caputo-Pearl said. Rather, the lack of big-picture strategy has weakened UTLA at the bargaining table.

The slate also says the president leads without input from other officers, much less from rank-and-file teachers.

Fletcher’s approach “isolates teachers, because it’s not projecting a vision that students and parents can plug into,” Lusain said. “We just don’t bring the strengths in numbers that a union is supposed to bring.”

THE PLAN TO WIN

Caputo-Pearl has already seen teachers “become the opposite of apathetic” in the fight to save his school—and he’s confident the strategy will work on a larger scale. That and the CORE caucus’s trajectory give him hope.

“That actually turned around reasonably quickly, because folks came in and engaged the members on a vision and a strategy.”

The online version of this article corrects two errors from the print version: the number of candidates on the Union Power slate (25, not 15) and the name of the group Coalition for Educational Justice.

A version of this article appeared in Labor Notes #418, January 2014. Don't miss an issue, subscribe today.