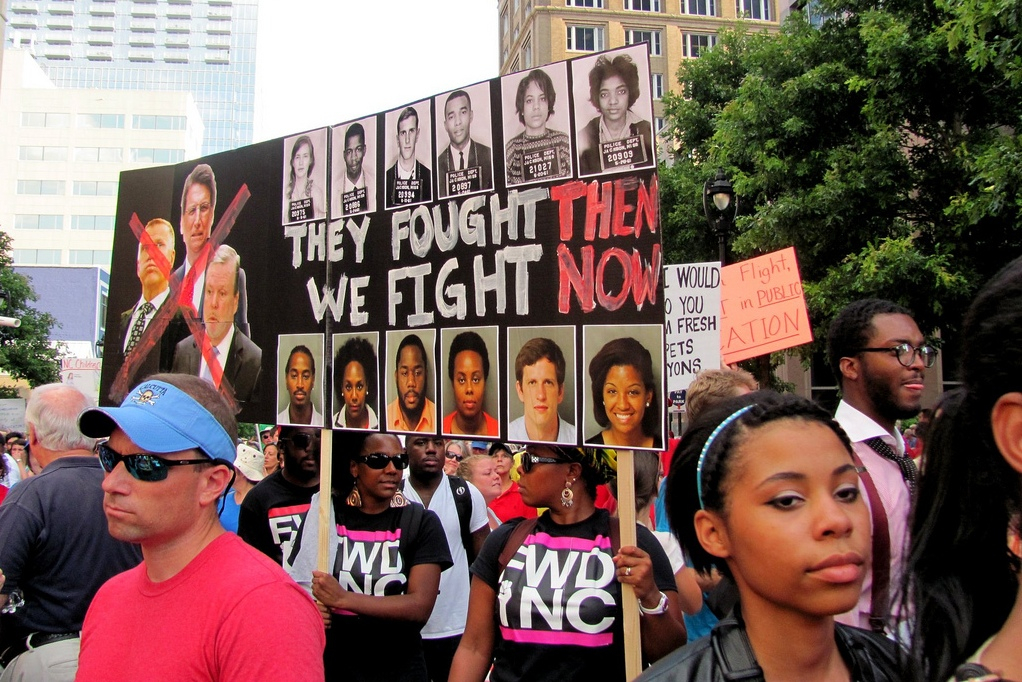 Moral Mondays protests shook North Carolina's capital through all of 2013. Now Georgia and South Carolina are taking up the fight, demanding their governors take the federal money to expand Medicaid. Photo: twbuckner.

Though both Georgia and South Carolina were hit with cold, rainy weather, hundreds turned out in both states this week to protest their governments’ refusal to expand Medicaid.

In Atlanta several hundred rallied on the steps of the Capitol January 13. The day began with lobbying the legislature, followed by a workshop led by Rev. Dr. William Barber, head of the North Carolina NAACP and architect of the Moral Mondays movement there. About 650,000 Georgians would be eligible for expanded Medicaid.

In Columbia, South Carolina, about a thousand people took part in the first “Truthful Tuesday” January 14. The protest took the form of a funeral procession, including coffins, for those who will surely die because of the government’s refusal to accept federal money to expand Medicaid under the Affordable Care Act.

Just as the demonstrators took their place on the south side of the State House, the clouds broke up and the sun came out. Among the speakers was South Carolina AFL-CIO President Erin McKee.

Barber planned to address another crowd in Columbia the next week on Martin Luther King Day.

People from all over the U.S. are invited to converge on Raleigh, the state capital, February 8 to demand better living standards and democracy—in North Carolina and throughout the U.S.

Thousands of North Carolinians have been challenging the state government’s antidemocratic austerity agenda for the past 10 months in protests organized by a coalition including civil rights organizations, unions, the faith community, and environmentalist and feminist groups.

The foundation for the Moral Monday movement was laid in 2006 when the Historic Thousands on Jones Street People’s Assembly Coalition, known as “HKonJ,” formed under Barber’s leadership. The North Carolina State House is on Jones Street.

A 3,500-person People’s Assembly in February 2007 agreed to a 14-point agenda calling for high-quality and well-funded public education, health care for all, affordable housing, a living wage or income support for all, and collective bargaining rights for public employees.

It demanded aid to historically black colleges and universities, an end to state discrimination in hiring and contracting, and to abolish the racially biased death penalty and mandatory sentencing laws, in order to “redress ugly chapters in North Carolina’s racist history.”

Since the beginning of 2013 the North Carolina government has launched a frenzy of attacks on working people’s living standards, their right to organize and bargain collectively, and even their right to vote.

Among the austerity measures: cutting off extended unemployment benefits, repealing the state’s earned income tax credit, and refusing to participate in the expansion of Medicaid. The state budget director, Art Pope, has been a major contributor to Tea Party groups and makes no secret of his connection with the Koch brothers.

The new law also prohibits counties from extending hours at polling places, even in the event of long lines. Some members of the legislature were quite open about their intent to keep away from the polls people they thought were unlikely to vote Republican.

In reaction to the attacks, especially on communities of color, the HKonJ coalition reached out to broader forces, especially in the faith community, and began weekly protests at the State House in Raleigh on April 29.

Historic Thousands on Jones Street, the coalition that built the Moral Mondays coalition, set these goals:

7. Document and redress 200 years of state discrimination in hiring and contracting.

12. Protect the rights of immigrants from Latin America and other nations.

This was the first Moral Monday. Hundreds converged on Raleigh to participate. In response to state officials’ refusal to meet with them, some engaged in civil disobedience.

Nearly 1,000 Moral Monday protesters were arrested throughout 2013. Though Republican Governor Pat McCrory said the demonstrators were from out of state, court records show that 98 percent of those arrested were North Carolina citizens.

Some unions have taken the Moral Monday protests to their members’ workplaces in an effort to increase rank-and-file participation. According to organizer Saladin Muhammad, members of the North Carolina Public Service Workers Union (United Electrical Workers Local 150) have set up informational picket lines in conjunction with the actions at the State House.

Muhammad himself was arrested at one of the early civil disobedience actions. He is appealing his conviction on trespass and disorderly conduct charges.

The southern states, where “right to work” (for less) laws outlaw the union shop, have for decades been a magnet for corporations seeking cheap labor and an escape from regulations. Unionizing the workforce is part of the Moral Mondays agenda—along with protecting the environment, improving education, and universal health care.

Achieving those things would not only improve Southern living standards but also protect workers elsewhere in the U.S., who would no longer need to fear their jobs’ being shipped to the South.

A national Mass Moral March to the State House is scheduled for February 8, gathering at Shaw University where the Student Nonviolent Coordinating Committee (SNCC) was launched in 1960.

Organizers call on “all people of conscience and concern to join us as we stand against the extreme and regressive agenda being pushed in North Carolina. This agenda is a reflection of what is happening across the United States.”

Thomas Bias is treasurer of the Labor Fightback Network, a retired printer, and a former member of the Typographical Union. He wishes to thank Donna Dewitt, retired president of the South Carolina AFL-CIO, Brett Hulme of the Savannah, Georgia, Regional Labor Council, and Saladin Muhammad, a founder of Black Workers for Justice, for their help.

Related
Union from The Start (You Don’t Have to Wait) »
Richmond Educators Are First In Virginia to Win Bargaining Rights »
Steward's Corner: How One Union Uses Kitchen Table Economics to Advance Medicare for All »
Pandemic Discrimination Against Asian Americans Has Long Roots »
New UE Pamphlet Highlights Rank-and-File Control, Calls for Return to 'Them and Us Unionism' »