An iPad on Every Desk: A Trojan Horse, Teachers Say 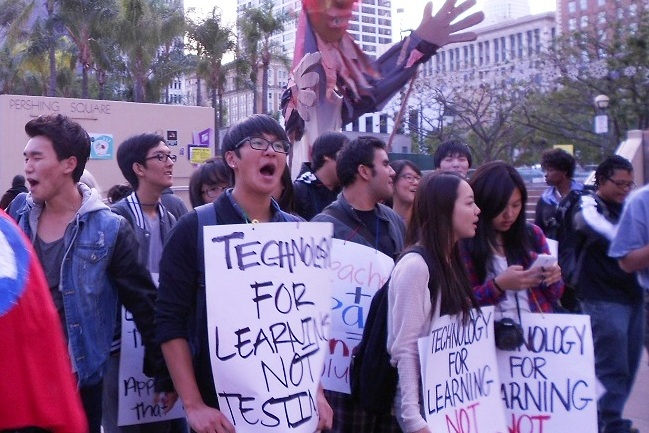 L.A. students marched against iPads and the testing regime they’ll bring. The November 7 protest was part of a coordinated week against testing that included events in New York City, Chicago, and North Carolina. Photo: PEAC.

A group of Los Angeles teachers and students says their school district’s plan to distribute iPads to every student is too good to be true.

The teachers say the money could be better spent than on cutting big checks to software and technology corporations. They suspect the iPad plan is a Trojan horse brought in to increase reliance on standardized curriculum and testing.

“It strikes all of us as utter nonsense,” said teacher Noah Lippe-Klein from a South L.A. high school, “at a moment when our schools are being stripped of nurses and college counselors.”

Teachers in Progressive Educators for Action (PEAC), a caucus within the teachers union; students; and members of the Schools Los Angeles Children Deserve coalition, made up of community allies and teachers, marched through downtown November 7 and rallied in front of district headquarters.

They questioned the iPads as one of many quick fixes pushed onto students and teachers by advocates of one-size-fits-all approaches to learning.

“This is not technology that helps my classroom,” said high school social studies teacher Rebecca Solomon.

Members of the Union Power slate participated in the march. They are running in elections next February to lead the L.A. teachers union, criticizing the current president for not building parent and community alliances to improve the schools.

The union’s upcoming rally demanding a salary increase is a case in point. The Union Power teachers want instead to advocate for more resources for schools, in addition to teachers’ salary concerns.

“Our students deserve a lot more than teachers who have a slight raise,” Solomon said.

Teachers and students from different schools met at central L.A.’s Pershing Square for the protest. They walked over a freeway overpass and held their banners for commuters to see.

The district is hailing the iPad rollout as a technology breakthrough. Distribution began at 47 of L.A.’s 1,100 schools this fall. Every student will have a tablet by 2014, if the program goes according to plan.

Funding comes from a 25-year construction bond meant for school buildings and infrastructure. Protesters questioned whether voters will endorse future bonds for badly needed classroom repairs and facilities improvements if administrators continue to pour the money into botched technology projects.

The L.A. school board made adjustments to the plan after problems sprang up. Within days of the first distribution, students hacked the security which was supposed to block them from getting to the Internet and using programs like Facebook and YouTube.

There was confusion among administrators and parents about who was responsible if iPads were lost, broken, or stolen; 70 were reported missing. Within a week several schools recalled the iPads altogether or suspended their use off-campus.

These glitches were accompanied by questions about the program’s cost—which could reach $1 billion.

Other adjustments include more evaluation of the program, slower iPad distribution, and a possible shift to laptops for high school students.

The decision to purchase iPads, one of the most expensive tablets on the market, is puzzling. The iPads cost the district nearly $800 each ($200 more than the store price) because they come pre-programmed with materials from Pearson, an education software and standardized testing company. The devices may also need keyboards, an extra cost, to work for older students.

The district has three-year contracts with both Apple and Pearson, so there will be another round of costs for the district to repair devices past their warranty and to update the software. It is unclear where the additional money will come from.

“They are hiring hundreds of people to monitor this rollout, when we still have teachers that have been laid off,” Solomon said.

Solomon said the district is rushing the technology in a frantic attempt to get Race to the Top federal funds, which Los Angeles missed out on in 2012 and 2013, and other education grants. Race to the Top money is tied to implementing technology and “Common Core” standards, which are developed into software with support from pro-corporate education reform interests like the Gates Foundation.

The Core standards are federally established curriculum guidelines. Companies like Pearson are pushing Common Core as a way to assess student performance across the country, which will get their products into schools. Apple and Microsoft compete to provide the tablets and computers to house this software.

Perhaps not coincidentally, Deasy’s deputy charged with setting up the iPad deal used to work for a Pearson subsidiary. He claims he stayed out of the decision to buy the iPads.

Deasy touts the fast-tracked plan as a way to get new technology into the hands of low-income kids. But teachers at the rally said it will actually harm these students by accelerating the push to measure school success through standardized testing.

In addition to taking new statewide tests on the iPads, students will be shifted onto preset Pearson lesson plans and assignments.

But she faults the new program for disrupting tried and true teaching practices: iPads individualize learning, limiting discussion and collaboration among students and with the teacher.

A better use of the funding, Solomon said, would be to work with teachers on how best to integrate instructional technology into students’ time in school, such as equipping schools with computers and wireless Internet so students can research, write, and edit papers.

The November 7 protest was part of a coordinated week of teacher action against testing that included events in New York City, Chicago, and North Carolina. The idea developed out of the Social Justice Unionism conference that the Chicago Teachers Union’s CORE caucus hosted in August.