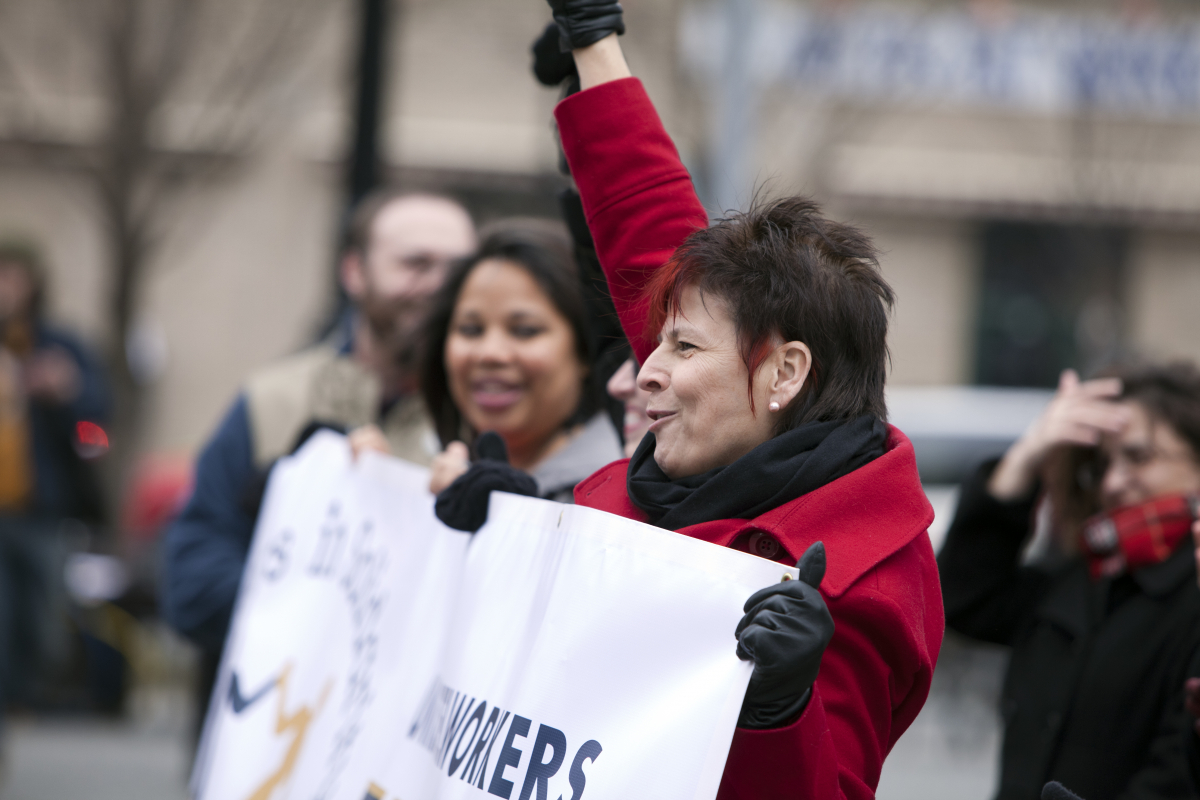 In the face of an awful economic climate and labor laws that too often favor employers, Pittsburghers are trying out a new organizing model: a rank-and-file community union.

The fledgling group brings union and non-union workers together to fight side by side on social justice issues and to seed workplace organizing committees through a Pittsburgh-flavored campaign called “Is Your Boss a Jagoff?”

Fight Back Pittsburgh, formed in January 2013, is an associate membership program of Steelworkers Local 3657, which represents staff at the international union. Already it has more than 250 dues-paying members. Some come from various other unions and community groups; some are otherwise unaffiliated with the labor movement.

Fight Back Pittsburgh operates similarly to a local union, with bylaws and an elected executive board. Members are active in six committees: communications, civil and human rights, fight back at work, membership, neighborhood action, and rapid response.

Dues are calculated as one quarter of one percent of each member’s self-reported monthly income, or members may do one hour of phonebanking per month instead. No expenditures can be made without membership approval.

Some of the most exciting and innovative work is taking place in the Fight Back at Work Committee. The committee operates a Worker Justice Hotline, which it promotes through face-to-face conversations, its web and social media pages, and the “Is Your Boss a Jagoff?” campaign (playing off the popular Pittsburgh slang term).

Any worker who is running into problems at his or her workplace can call the hotline and speak with a committee member. Often, this turns into an opportunity for the worker to organize with co-workers to try to resolve—or at least improve—the situation.

For example, the hotline received several calls from workers at museums and libraries who are having their hours cut so their employers won’t have to offer health insurance. The workers decided to form an organizing committee called “Info Desk” and Fight Back at Work has been providing assistance.

In monthly membership meetings at USW headquarters, Fight Back Pittsburgh’s committees report on their work. Special guests from area unions and community groups make presentations about local struggles the organization—or individual members—may want to get involved in. Workers from the Service Employees’ organizing drive at the University of Pittsburgh Medical Center were recent guests, for example.

The group has helped Pittsburghers for Public Transit, which is fighting for transit funding in partnership with Amalgamated Transit Union Local 85. Members have turned out for PPT rallies and assisted with outreach.

Members participated in the Summer of Solidarity Tour, a coast-to-coast tour of grassroots union activists that stopped in Pittsburgh. They discussed and adopted resolutions condemning the Trayvon Martin shooting and opposing intervention in Syria. And recently, Fight Back Pittsburgh hosted a Labor Notes Troublemakers School.

The Steelworkers aren’t alone in experimenting. Organizations across the labor movement are looking for new methods of organizing the unorganized, trying out nonprofit worker centers and “non-majority” or “pre-majority” unions. The AFL-CIO devoted much discussion to nontraditional organizing at its recent convention. The United Electrical Workers (UE) have done nontraditional organizing, notably in the South, for more than a decade.

Fight Back Pittsburgh is different from other nontraditional models in that it is totally member-run and has no paid staff, being wholly funded by dues and other donations. Although it has a tie to USW, members come from many different unions, community groups, and neighborhoods.

It’s a challenge to make the labor movement relevant to workers who have never been in a union, or who do not see workers’ rights as significant to their lives. Among Fight Back Pittsburgh’s goals is to spark some conversations about class struggle.

In this vein, the group is conducting workshops on knowing your rights at work, geared toward non-union workers, and on Obamacare. While they inform participants on civil rights and labor laws, trainers emphasize that organizing is a better way to improve workplace conditions.

“Fight Back Pittsburgh is a way to meld the new worker center models of organizing with traditional industrial unionism,” said Patrick Young, president of USW Local 3657 and a founder of the new group. As its members try out new approaches, “the fact that Fight Back Pittsburgh is partnered with a Steelworkers local union gives us a strong and direct connection to the work of the international union.”

Margot Nikitas is organizing chair of Fight Back Pittsburgh and associate general counsel of the UE. Learn more at www.fightbackpittsburgh.org or www.facebook.com/FightBackPittsburgh.

A version of this article appeared in Labor Notes #416, November 2013. Don't miss an issue, subscribe today.
Related
Employers Are Using the Crisis to Push Concessions They Don't Need »
Striking ATI Steelworkers Hold the Line for Premium-Free Health Insurance »
Los Deliveristas Speak: How Delivery Workers Are Organizing to Take On the Apps »
Can a Driver Uprising Make Food Apps Deliver? »
Interview: If Only Unions Had Managed to Organize the South, Could Trump Have Been Avoided? »