In Chicago and Philadelphia, Closing Schools and Funding Charters 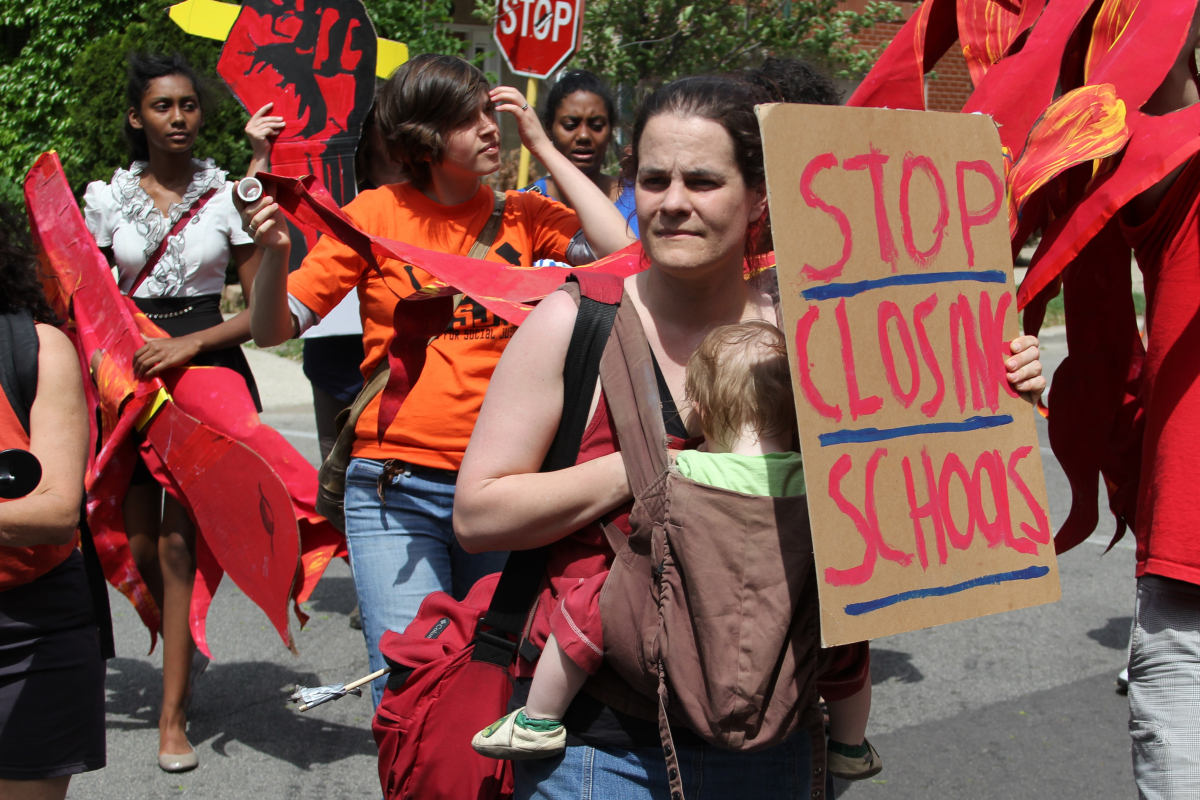 Chicagoans held a three-day march across the city to stop school closings, but 47 were shut down. Photo: Chicago Teachers Union.

Given its high rate of gun violence, the city dealt with the disruption by expanding its Safe Passage program: diverting police and firefighters and spending $16 million to hire low-wage temps to monitor children to and from school.

This band-aid fix shows the mayor is “worried about a political nightmare for him, not for the kids,” said elementary school teacher Al Ramirez. “Otherwise he wouldn’t have closed 50 schools.”

Emanuel claims the system has a $1 billion deficit. He blames the teachers’ pension fund in part, though it’s underfunded. (The union has fought off pension cuts, alongside other Illinois public sector unions.)

And though the district said the closed schools were underutilized, it issued a call for more charter schools—privately run, but publicly funded—to open in 2014-2015, in addition to the 15 that opened this year.

In Philadelphia, the city with the nation’s second-largest number of newly shuttered public schools, the district closed 23 schools—one out of 10—and district leaders laid off a fifth of school employees, leaving overcrowded classrooms and barebones, if any, support staff. That didn’t stop them from opening nine new charters.

This summer cafeteria workers and school safety workers waged a public campaign, including hunger strikes, to be brought back into the schools. Many were rehired, but even with that victory, schools are still short on counselors and other staff.

Philadelphia parent Helen Gym, co-founder of Parents United for Public Education, called the situation “dangerous and unsustainable.” She said her own children are in classes with as many as 50 students.

In both cities, parents are alarmed about children’s basic health and safety, even before their learning environment.

Gym said Philadelphia district officials have broken their promises to parents over and over, most recently when they said children from the closed schools would be moved to improved ones. “That went out the window when they cut staff, eliminated counselors,” she said. “Students are attending schools that are worse. Every school is worse off.”

School closings have been a national trend for a decade, in line with the corporate vision of moving away from a neighborhood-school model to make schools compete like businesses. Proponents say it gives parents choices. In reality it pushes parents and students to vie to be accepted at charters and magnet schools while the majority of schools are underfunded.

The top-down education privatization agenda, pushed so successfully by billionaires like Bill Gates and Eli Broad, is supposed to be all about the kids. But children are the hardest hit by the bulldozer of “reform.”

In both cities, district leaders promised the record-breaking round of closings would create fully “utilized” schools with improved conditions for students. Instead, staffing is skeletal.

Over the summer the Chicago district laid off 3,000 workers. A thousand teachers were hired back, but the district enacted harsh budget cuts on the schools left standing. Some were told to cut upwards of 25 percent from their already low budgets. “We are picking up the slack, making up for the cuts,” said Al Ramirez. “It doesn’t look like it’s going to get any better.”

Chicago Teachers Union (CTU) organizer Brandon Johnson said it’s a credit to teachers that they are willing to work under these conditions, including the city-wide fear of violence. “Despite helicopters hovering overhead, students were greeted by loving teachers who were excited to be there,” he said.

Philadelphia’s schools, Helen Gym added, “opened out of the sheer hard will and professionalism of teachers and staff.”

Pennsylvania’s Republican Governor Tom Corbett is withholding $50 million in state funds from the city until the Philadelphia Federation of Teachers (PFT) accepts a contract with big economic and vaguely worded “academic” concessions. The union’s contract expired in August.

Middle school teacher and coalition activist Sam Reed was outraged when not only political leaders but also business heads including Comcast CEO David Cohen called on teachers to take a pay cut.

“The narrative is that teachers need to make more sacrifice,” he said. But there is money to fund Philadelphia schools: “It’s just the will isn’t there.”

The $50 million is on top of the governor’s previous $1 billion budget cuts statewide. The district has been under state control since 2001 and, like Chicago, has an appointed school board.

“Corbett is building a $400 million prison. Our deficit is $354 million,” said PFT spokesman George Jackson, referring to the figure the district claims it needs to make up. “It is choices. Corbett has made these choices.”

While the Republican governor is the obvious villain, Philly’s Democratic mayor has lined up with Corbett. Like Chicago’s Emanuel, he is aggressively pushing concessions on all public workers and promoting privatization.

“We wish [Mayor Michael Nutter] had taken this strong a line with Governor Corbett,” Jackson said.

The teachers union offered a wage freeze, and to pay more for health care, if the laid-off workers would be brought back. But Nutter demanded more: $130 million in concessions, including up to a 13 percent pay cut and the right to subcontract, extend the work day, and limit job security and seniority.

The district even proposed to take away teachers’ right to a desk, drinking fountains, and rooms for counselors to meet with students, along with copy machines and materials for classrooms.

Drivers, engineers, cleaners, and other staff represented by the Service Employees agreed to what the district said was $100 million in concessions in 2012, after the district threatened to lay them off and subcontract their work. They took a wage freeze and agreed to contribute as much as $45 per week out of their paychecks back to the district—effectively a pay cut.

The school board has already suspended teacher seniority (along with rules about guaranteed step wage increases), so if any workers are recalled the board can use its own criteria to select which ones.

NO RIGHT TO STRIKE

The Philadelphia Coalition Advocating for Public Schools—parents, student groups, community organizations, and the school unions—has been fighting closings and budget cuts since spring 2012. The group protested at schools slated for closure and at the central district office, and held big rallies, town hall meetings, and candlelight vigils.

Teachers’ ability to strike is limited, though. State law threatens striking teachers with loss of their teaching certificates, so it’s not something thrown around lightly.

While the state has the ability to impose a contract on teachers, court rulings have blocked it from imposing economics on public sector workers, which gives PFT bargainers some leverage as they continue to negotiate.

CTU organized a three-day march across the city and rallied with thousands at city hall, leading to dozens of arrests for civil disobedience. One symbolic action this summer was a toilet paper drive, to highlight that principals would be forced to choose between cutting teachers and cutting toilet paper.

Despite the setbacks, said CTU organizer Johnson, “people have been awakened because of our activism. No one is going to shut up and go away. You are going to see the same things as last year, but larger.”

CTU leaders aim to strengthen members’ political power in the city with fights for fair taxation, an elected school board, and possibly a different mayoral candidate in 2015.

They also want to beef up the elected Local School Councils, which, if organized, could become centers of teacher-parent-community resistance against the school board’s attacks. Elections for the councils happen in 2014.

“We are really thinking through how we can get our membership to deepen those relationships with parents,” said Organizing Director Norine Gutekanst.

While CTU has not succeeded in stopping the wave of school closings, the union has fought off many other attacks on students and on working conditions to which other teachers unions have succumbed. The union won over the community with an aggressive contract campaign with thousands of rank and file teachers involved, leading up to a nine-day strike a year ago.

In struggling urban districts in Cleveland, Baltimore, New Haven, and Newark, however, teachers have lost ground on job security and seniority-based pay. Their national teachers union supported the concessions as the AFT’s model of “solution-based unionism.”

The AFT has also played a big role in Philadelphia, where teachers will need a great deal more mobilization to avoid such a fate.

A version of this article appeared in Labor Notes #415, October 2013. Don't miss an issue, subscribe today.