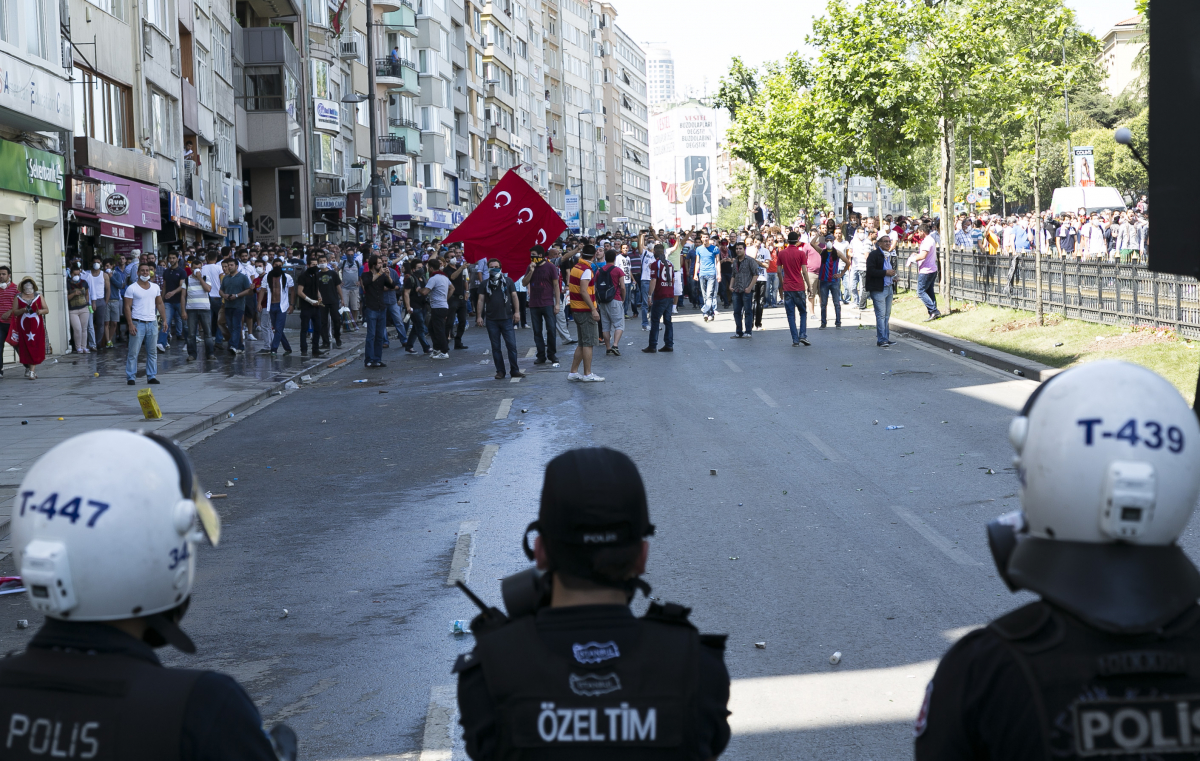 Two labor federations have joined anti-government demonstrations in Turkey, where protests have lasted over a week and captured the world’s attention.

The Confederation of Public Laborers’ Unions (KESK) had already planned a strike June 5, demanding wage guarantees and job security from the Turkish government. With protests taking over many Turkish cities, KESK moved the strike up one day and linked it with anti-government actions, criticizing the government’s “terrorist response” to peaceful protests.

Emre Eren Korkmaz—an official in the Textile Workers Union, affiliated with the Confederation of Progressive Trade Unions of Turkey (DISK), which also struck—has been at the demonstrations day and night since they began.

“When people leave their jobs, they gather in squares and in their districts,” he wrote in online correspondence with Labor Notes. “At 9:00 pm, in all İstanbul and Turkey, people go out to streets and chant slogans, and in all districts ten thousands of people march against government.”

Chants include “shoulder to shoulder against fascism,” “government resign,” and “resisting workers will win.”

The upheaval was initially sparked when a small sit-in—to protect an Istanbul park from being bulldozed to make room for a shopping mall—was raided by police, who used violence and tear gas to evict the protesters.

Thousands joined in after seeing the police violence. The protests spread first through Istanbul’s Taksim Square, then to other Turkish cities, with thousands of people arrested and injured.

Photographs of mass demonstrations, and of police tear-gassing and attacking demonstrators, have spread across the world, drawing comparisons to Egypt and Occupy Wall Street. Solidarity rallies have been held in New York and other U.S. cities.

“In Taksim Square there is 24-hour resistance,” Korkmaz wrote. “There are barricades around the square protecting it from police intervention.”

Taksim Square has added significance for Turkish unions. Not only is it the city’s major square, but it has been the location of May Day rallies, including in 1977 when 36 demonstrators were killed.

This year, after a few years of allowing people to congregate there, the government banned protests and gatherings in Taksim Square and other popular gathering spots in Turkey. They denied unions a permit to march, and blocked public transportation in the area. Seventy-two people were arrested.

“The government doesn’t want people to gather in central places,” Korkmaz wrote. “They want us to go places where there is nobody around.”

KESK began its two-day strike in solidarity with the protesters midday Tuesday. The federation includes 11 unions and an estimated 240,000 members, including teachers and other public sector workers.

Members of a second union alliance, DISK, joined for a one-day strike. DISK includes a wide range of unions representing textile, mine, health, and tourism workers.

KESK reports that the government relies on temporary workers over full-timers, and the government is pushing for subcontracting and privatizing public sector work, which is difficult to organize. Employers push for “flexibility” in working conditions.

Strikers are protesting a bill that would cancel the hopes of many temporary and contracted workers for permanent jobs and roll back various rights for public sector workers. For instance, one issue is protections against night shifts for women workers from the beginning of a pregnancy until a year after their maternity leave. Another is the elimination of overtime pay for workers in many public institutions.

“The future of over 2.5 million public servants would be darkened, and their job security removed,” wrote Nevin Kaplan, one of the founders of KESK and a member of its General Council. (Kaplan’s comments have been translated from Turkish.)

“In these protests and resistance, there are people from all over the country, but the women and young people are in the front stage,” she wrote. Women and youth in the informal economy are especially hard-hit by the difficulty of unionizing.

“Subcontracting and insecure work has surrounded everywhere, especially the private sector,” Kaplan wrote. “Therefore, the employees cannot unionize, cannot found unions, because they don’t have any security and they get dismissed when they do... The right to found a union for those who have been left to their fate has been taken from them.”

Unions had plenty of conflict with Prime Minister Recep Tayyip Erdogan well before protests erupted across the country. KESK and other unions have faced Erdogan’s pro-business and authoritarian tactics. Much of Turkey’s labor law was written in 1980, while a military junta ruled the country, so it is anti-democratic and pro-business, Korkmaz said.

The unionization rate is only 8 percent in Turkey, and 3 percent in the private sector.

Since the coup, workers have joined the struggle for economic and social rights, in addition to traditional worksite fights. The spring 1989 strike wave and annual protests since then have been one of the main factors to strengthen Turkey’s union movement, Kaplan wrote.

Last year Turkish police took 71 union members and leaders into custody, after raiding the KESK offices and searching members’ homes. They were charged with “being a member of an illegal organization” for participating in meetings and strikes. Some of those leaders are still in jail.

Now anti-government protests have united a wide range of Turkish civilians, from students and labor activists to the country’s middle class. Protesters complain of Erdogan’s increasing authoritarian and religious tendencies, in a country known for being a secular democracy.

His overreach includes recent laws curbing the sale of alcohol, an attempt to ban abortion access, plans to build more mosques (including one in Taksim Square), and naming a bridge after an Ottoman Sultan known for massacres and religious persecution.

But more than his legislation on social controls, many protesters are rejecting the prime minister’s pro-business agenda. Erdogan, who was reelected to his third term with strong support, is known as a neoliberal regional leader.

His plan to raze Gezi Park for commercial development is just one of many examples of what has outraged so many Turkish people. They are fed up by the conversion of parks, historic sites, and public spaces into business developments that displace poor residents.

Other controversial development plans include new bridges, shopping malls, canals, and a billion-dollar airport expansion that critics complain are over-the-top, pushed through without community input, and with no respect for the environment, traffic concerns, or Turkish people’s love of outdoor spaces to congregate.

The massive demonstrations, Korkmaz said, are helping build connections with unions. “People have respect for unions and organizations. Organized forces are weak, but this will change,” he wrote. “Young people, women, workers; they understand that they should be organized.”

The prime minister has denounced the demonstrations, saying they are being led by extremists; he blamed social media and Twitter for making trouble, and insists things will return to normal in the country. And he announced plans to move forward with demolishing Gezi Park.

Korkmaz said the protests will continue until the people’s demands are met. Minimum demands include “protecting Gezi Park, resignation of mayors and other responsible authorities, free all arrested friends,” he wrote, and “lifting all bans over demonstrations in central squares.”

You can support the Turkish protesters by signing this petition sponsored by LabourStart, DISK, and the International Trade Union Confederation. Special thanks to Zeynepgül Atsız and Özlem İlyas Tolunay for translating Nevin Kaplan’s comments.