Time to Update the Union Handbook on ‘Just Cause’ 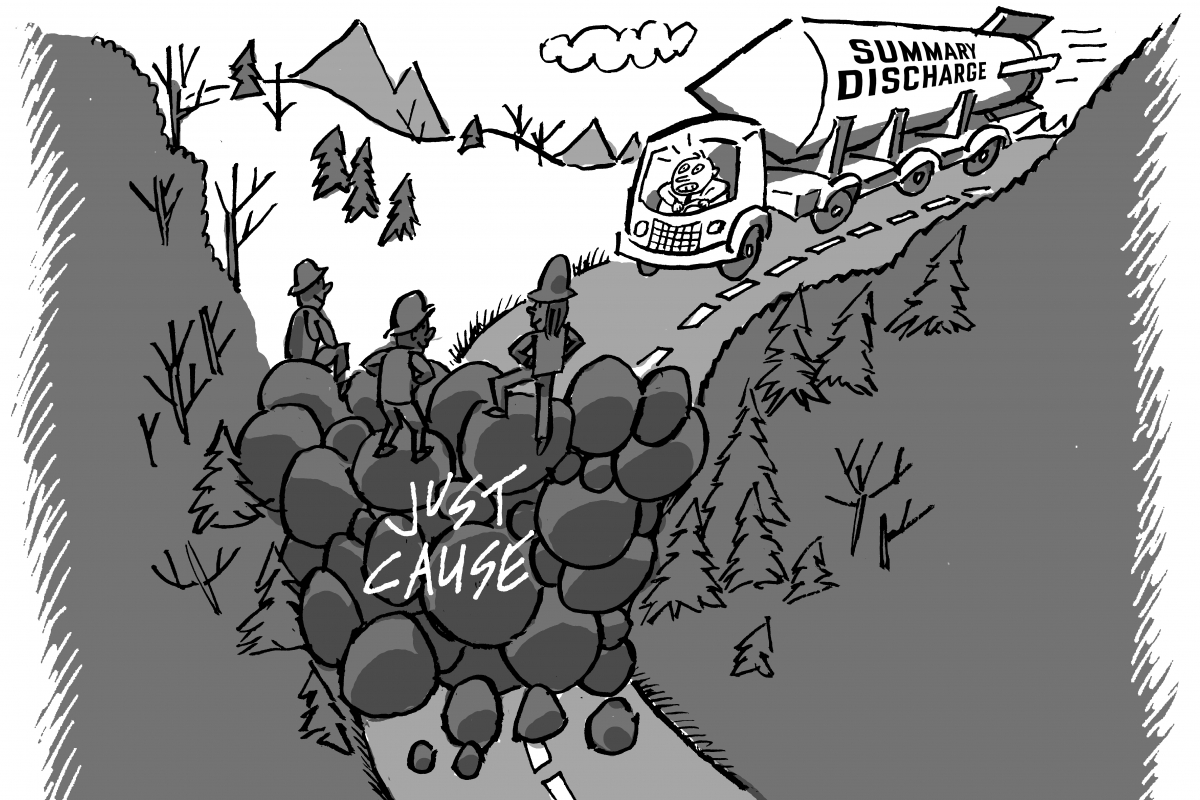 Did the employer have a good reason, a "just cause," for disciplining or firing a worker? Most seasoned labor arbitrators disdain the traditional seven tests, so it's time for new ones. The author's book, Just Cause: A Union Guide To Winning Discipline Cases, can be purchased from Labor Notes. Drawing: Nick Thorkelson

Except for the construction and theatrical industries, almost all union contracts in the U.S. and Canada require the employer to have a good reason—“just cause”—before disciplining or firing a worker.

But few agreements spell out what the words mean—leaving workers to churn in the jelly-like universe of “I know it when I see it.”

In the 1960s, Chicago arbitrator Carroll R. Daugherty attempted to list the necessary elements of the standard, putting forward a blueprint that soon became known as “the seven tests of just cause.”

Presented in the form of questions, Daugherty’s tests require that rules be made known, that they be reasonable, that the employer conduct an investigation, that the investigation be fair and objective, that proof be substantial, that penalties be applied evenhandedly, and that the seriousness of the offense and the employee’s record of service be taken into account.

The seven tests were warmly embraced by unions, which had long pined for an easy-to-use checklist to prepare for grievance and arbitration hearings. Many included the tests in training materials, posted them on websites, and, in some cases, inserted them into contracts.

The Bureau of National Affairs, a legal publisher, produced a popular book entitled Just Cause: The Seven Tests and issued a training movie under a similar title.

What has been missing for the past 50 years is an assessment of whether the seven tests are standing unions in good stead.

It may come as a surprise, but interviews with many arbitrators, a review of scholarly articles, and a canvass of several years of arbitration decisions suggest that most seasoned labor arbitrators disdain the seven tests.

For example, a law review article by a past president of the National Academy of Arbitrators calls the tests “misleading in substance and distracting in application.” A 2008 NAA study found that only 8.5 percent of arbitrators use the tests in their analyses of just cause—and many of these do so only if both parties cite them in their presentations.

A look inside the tests reveals several disturbing flaws.

Nowhere in Daugherty’s list (nor his appended notes) is there a requirement that the employer apply progressive discipline. Yet this approach is applied by the overwhelming majority of arbitrators.

Knowledgeable labor practitioners understand that the primary function of workplace discipline should be to rehabilitate, not to punish, humiliate, or set an example. An employer should apply the lowest level of discipline that is likely to lead an employee to mend his or her ways.

Only in extreme cases, where a worker’s actions cause grave damage or where it is highly probable that the employee will re-offend, is a first-offense discharge justified.

Daugherty also omits consideration of mitigating and extenuating circumstances. This is disturbing, because years of vigorous labor advocacy have built a consensus around this standard.

Unions frequently win cases by arguing that extenuating circumstances, such as poor training, provocation, or speedup, or mitigating ones, such as medical conditions, long seniority, or a positive record, must be considered when determining whether disciplinary penalties are proper.

Arbitrator animosity to the seven tests stems principally from its heavy-handed requirement (two tests out of seven) that the employer conduct a thorough investigation.

While no one suggests it is unnecessary to investigate, few, if any, arbitrators believe that a penalty should be overturned because the employer failed to interview all the witnesses or review all the records. Many say that, if the evidence is convincing, it does not matter how quickly it was assembled.

There does not appear to be a single published arbitration award reinstating a discharged employee simply on the ground that management’s investigation was insufficient.

Most arbitrators also reject Daugherty’s insistence that management assign an investigator who is “detached” from the parties and the dispute.

The third of the seven tests—that rules be “reasonable”—has little value for unions. For one thing, Daugherty states in his notes that, even when a rule is unreasonable, an employee must obey it unless personal safety or integrity is threatened.

For another, he says that a rule is reasonable if it “relates” to the orderly, efficient, or safe operation of the enterprise. This is a relatively easy threshold for an employer to meet, even for rules that are ill-advised or otherwise objectionable.

By putting forward standards that are contradictory and not widely accepted, Daugherty encourages unions to take cases to arbitration that they have no prayer of winning.

Unions should update their training materials to present a more accurate description of the accepted elements of just cause. The following format is suggested:

Union attorney Robert M. Schwartz is the author of Just Cause: A Union Guide to Winning Discipline Cases, where the new seven tests, and much more, are laid out in detail. Order from labornotes.org/store or call 313-842-6262.