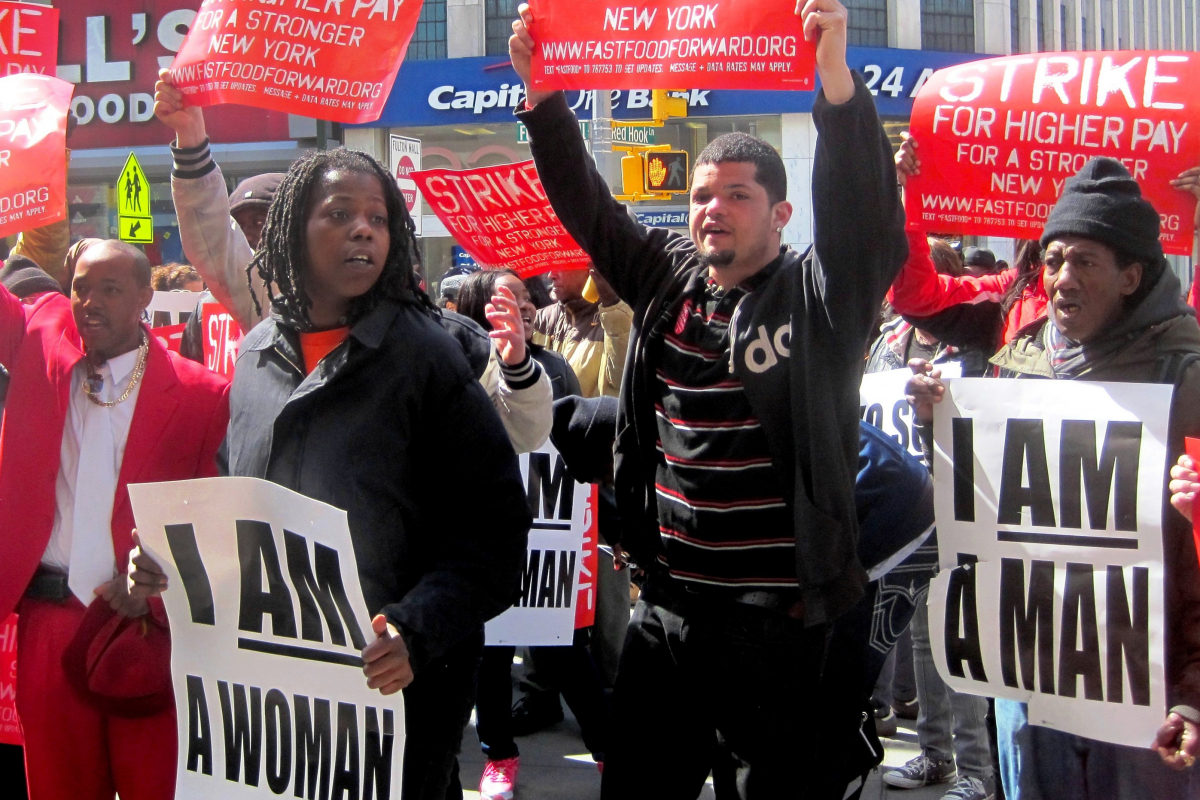 Fast food strikers rallied outside a Brooklyn Wendy’s on April 4, the anniversary of Martin Luther King, Jr.’s assassination. Their signs recalled the 1968 Memphis sanitation workers strike King was supporting when he was killed. Photo: Jenny Brown.

After years of downplaying strikes, the union that’s funding fast food organizing is now embracing the tactic. The Service Employees have underwritten short strikes by fast food workers in seven cities in the last two months—including the largest, in Detroit, where 400 workers walked out of dozens of restaurants and completely shut down three.

Fast food is an unlikely union target, due to high workforce turnover and layered franchise ownership. And the path forward is uncertain, say organizers. The only thing that seems sure is that typical union elections won’t work.

Nonetheless, the strikes have caught the imagination of fast food workers around the country, who toil in one of the economy’s few growth sectors. Unpredictable hours, tyrannical bosses, and rampant wage theft are eroding their already low pay.

“Whenever they want to keep labor costs down,” managers make workers clock out and continue cleaning the restaurant or stocking, said Kasseen Silver, who works for Burger King in Harlem. “It’s hard, knowing how many hours you worked that week and your paycheck doesn’t show it.”

Humiliation often comes with the job. Jimmy John’s striker Rasheen Aldridge in St. Louis said that after lunch rush one day, his boss handed him a sign saying “I made three wrong sandwiches today,” then snapped a picture. And by “wrong,” his boss meant he’d added turkey and roast beef to the sandwich in the wrong sequence.

“To them, we’re a bunch of Social Security numbers,” said Domino’s worker Gregory Reynoso at a recent demonstration in Manhattan. He led six co-workers out on strike for a day last fall. On April 4, 17 of his co-workers walked out.

The fast food strikes seemed to come from nowhere when the first one jumped off in New York last November, but they are part of a coordinated effort by SEIU, which has been providing funds as part its two-year-old project “Fight for a Fair Economy.”

FFE was originally created to “change the environment” through a flurry of actions for economic justice, especially in states under threat from right-to-work legislation, and also to help Barack Obama win the presidency in 2012.

The union is funding groups in at least 10 cities to employ fast food organizers. In some cities the groups were created by SEIU; in other cases they aren’t related. The union sends staff to train organizers and coordinates the efforts with national phone calls.

In New York, for example, the effort has been headed by New York Communities for Change, which rose from the ashes of ACORN in 2010. The group hired 40 fast food organizers last spring.

They initially made contact with workers by asking them to sign a petition for one of the group’s ongoing campaigns—for affordable housing or against the New York police’s hated “stop and frisk” policy, according to two of the organizers.

Thus furnished with names and phone numbers, organizers called and met with workers through the summer and fall.

“There was so much turnover, we would make contacts and then they wouldn’t work there anymore,” recalled Dylan Tucker, who worked on the initial phase of the New York campaign.

Overall, however, turnover in fast food decreased sharply during the recession—one industry publication said it hit record lows—and picket lines for the recent strikes feature many who have worked at the same place more than two years.

The fast food campaign initially focused on New York and Chicago, but a survey of those workers showed large majorities favored unionization. That’s when SEIU expanded the effort to many more cities, said Tucker.

Although the organizers followed a standard model, counting supportive workers in each store as though for a union vote, the campaigns are unlikely to follow the normal route to a Labor Board election.

“Standard ways of doing things aren’t going to work in this industry,” said Martín Rafanan, a minister who works with Jobs with Justice in St. Louis, where 130 workers from 30 different outlets struck May 8.

How Are They Not Fired?

In addition to “$15 and a union,” strikers are demanding an end to wage theft and to employers’ retaliation against them when they organize. Retaliation for collective action is an unfair labor practice, so strikers who protest retaliation cannot legally be fired. (If they struck only for higher wages, the boss could legally replace them.)

Of course, it takes more than the law. After New York’s November strikes, clergy and city council members walked a Wendy’s worker back in after her manager told her she was fired. The high-powered delegation convinced the manager to “unfire” her.

In St. Louis, one outspoken Arby’s worker struck even though none of her co-workers joined her, said Martín Rafanan. When she returned, managers cut her hours. Jobs with Justice organized a delegation to call, then visit the restaurant, including a rabbi whose congregation meets nearby. When the group arrived, a regional manager materialized to tell them it was all a misunderstanding: the worker’s hours had already been restored, and in fact expanded.

It doesn’t always work. Gregory Reynoso, a Domino’s delivery driver in Brooklyn, was fired after he led co-workers out on two strikes. Delegations have gone to the store at least twice to protest.

When 100 people showed up June 14, including pastors, politicians, and Communications Workers members, a manager told them by phone that Reynoso should come in and reapply for his job. When he and a small delegation tried to enter the store, though, they were stopped by the police.

They’re figuring things out as they go along, Rafanan said, but an important element is support from community leaders like clergy and city council members. Every worker who struck in St. Louis walked back in with a delegation of these leaders, he said (see box).

Similar tactics around the country have kept post-strike retaliation to a minimum. In most cases, community supporters deliver letters in advance telling management that workers are going on strike and why, he said.

St. Louis workers, some of whom were already involved in Jobs with Justice campaigns to rein in payday lending and raise the minimum wage, traveled as a group to Chicago for the strikes there and got inspired, said Rafanan. He anticipates a national meeting of workers this summer.

Workers Organizing Committee of Chicago boasts that it includes workers at more than 100 different employers in fast food and retail. Around 300 struck April 24, mostly from downtown businesses.

With such an assortment of employers, the effort seems aimed at organizing low-wage workers not into a union but into a force that could extract changes from local government.

“The relative power this workforce has over individual employers is going to be minimal,” said Bill Fletcher, Jr., chair of the new National Retail Justice Alliance, a think tank and advocacy group that gets some support from the Food and Commercial Workers. “But the power this workforce has on a citywide level, in terms of influencing city governments, could be very disruptive.”

A boost to the city minimum wage, or a city ordinance requiring paid sick leave, would level the playing field for employers: they couldn’t argue that paying workers more would disadvantage them versus their competition.

Workers could understand and get behind “a rational, compelling strategy that is moving towards citywide standards,” said Fletcher, a former AFL-CIO education director.

Besides minimum wage increases, such efforts might include a requirement that part-timers get regular schedules or, Fletcher suggested, “just cause” standard for firing. Just cause would help all workers stand up for themselves—not just those trying to unionize.

Small victories accumulate. In New York, the campaign commissioned a survey of 500 fast food workers, finding that 84 percent had experienced some form of wage theft. The state’s attorney general has launched an investigation.

And a week after the St. Louis strikes, Aldridge’s boss, the one with the “three wrong sandwiches” sign, was fired for mistreating workers.

In organizing Walmart and fast food outlets, unions are following the jobs. While only 21 percent of jobs lost in the recession were in low-paid occupations, 58 percent of the jobs created recently have been, according to a National Employment Law Project report last year.

And since the recession officially “ended,” the incomes of the top 1% have grown 11.2 percent, while the 99%’s incomes shrank 0.4 percent, according to Berkeley economist Emmanuel Saez.

Like striking Walmart workers, fast food organizers frame their demand for higher pay as a way to boost the overall economy, putting more money in workers’ hands to spend on goods and services.

SEIU keeps its cards close, but one certain element of its plan is agitation to raise the minimum wage, which would help the union’s janitor and security-guard members, too.

“If the objective is really to raise the minimum wage [legislatively], it’s important that workers know that that’s what they’re fighting for,” said Fletcher.

Flanked by fast food workers from the campaign, California Representative George Miller and Iowa Senator Tom Harkin introduced bills March 5 to gradually raise the federal minimum from $7.25 to $10.10. The House acted with uncharacteristic speed, killing the idea 10 days later, 233-184, when it was attached to another bill.

The situation is only slightly less grim in the states. In the wake of Walmart and fast food strikes last fall, the New York legislature agreed to slowly increase the state minimum, from $7.25 to $9 by 2016, but it won’t be indexed to inflation.

A citizen initiative to raise Missouri’s minimum by $1 was blocked from the ballot last year by business interests, and a proposal in Illinois was recently diluted to exclude tipped workers.

Fast food strikers are unapologetically demanding $15 an hour, a bold figure that is now roughly the median annual wage in the U.S. “Fifteen and a union,” strikers chanted outside a Wendy’s in Brooklyn April 4.

In Detroit, when managers at an eastside McDonald’s called in other employees to fill strikers’ shifts, they struck, too, keeping the store closed.

While buoyed by the strikers’ energy and leadership, campaign observers sound a cautionary note. Some say they hope the union will commit sustained resources, and not leave workers in the lurch if legislative goals aren’t immediately met.

And they worry that organizers aren’t providing a sustainable organizing home beyond the workplace—particularly important in the high-turnover restaurant industry. The Restaurant Opportunities Centers United has created such worker centers in several cities.

“If anybody says they have the answers, they’re probably wrong,” said Rafanan of the uncharted waters ahead. “But our parents and grandparents figured it out, and we will, too.”

A version of this article appeared in Labor Notes #413, July 2013. Don't miss an issue, subscribe today.