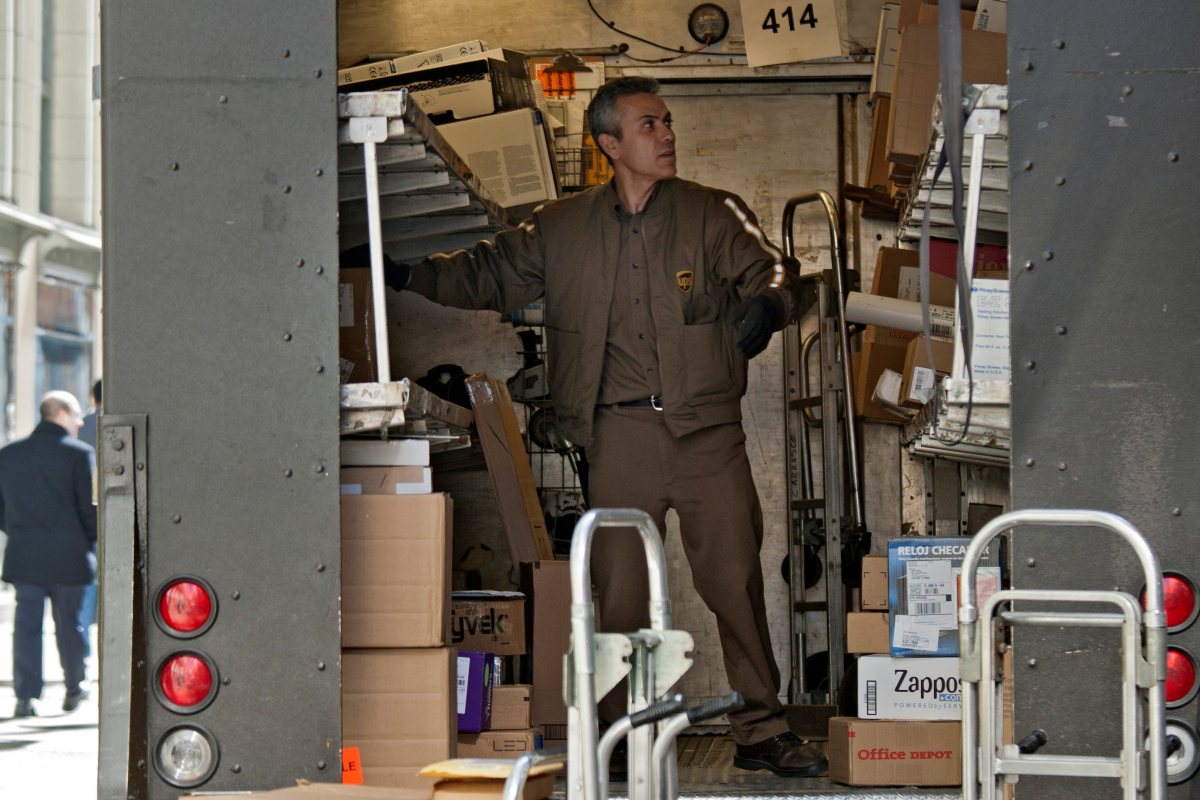 Union reformers are emphasizing contract language that would make UPS hire more drivers rather than piling more work on the ones they have. Photo: Jim West / jimwestphoto.com.

Bargaining is nearing a settlement on the largest private-sector union contract in the U.S., for nearly 250,000 Teamsters at UPS.

The current agreement expires July 31 but UPS wants an early agreement to keep FedEx from luring away customers scared about a possible strike. And union bargainer Ken Hall is intent on accommodating that request.

In 1997, the Teamsters won a two-week strike. Since then, the union has settled every agreement early, in 2007 by half a year. Union bargainers made concessions in that last contract, at a time of record UPS profits.

At the outset of bargaining in September, Hall declared firmly there would be no agreement without addressing Big Brown’s escalating harassment of workers.

This month, he says the same but still gives no specifics about what the union is seeking. Most of the union’s statements have focused instead on the company’s dramatic demand that workers pay a portion of health premiums, $90 a week for family coverage. Hall declares the union won’t concede 9 cents.

Paul Trujillo, a part-time loader and alternate steward in Lexington, Kentucky, says, “UPS has done a very good job of distracting people from the other issues. It’s deliberate. Most of our part-timers don’t even make $90 a week starting out. Now most are willing to give up anything else just to keep their health care—no raises, no anything.”

“UPS has made record profits in a recession by using harassment and technology to squeeze more work out of a shrinking full-time workforce,” said David Levin of Teamsters for a Democratic Union (TDU), the reform caucus. “Our focus is on fighting for contract language that will reduce harassment and excessive overtime and make UPS create more full-time jobs instead of working members to death.”

Working conditions have long been the stick in the craw of well-paid UPS drivers. The company’s tight control of their every move puts them among the most regimented workers in the country outside those on an assembly line.

Every second of a driver’s day is monitored, through GPS, the touch-screens where customers sign for packages, and “telematics”—200 sensors mounted on each truck (in UPS lingo, a “package car”).

Supervisors know what time a driver got out of his truck to deliver a package, how long it took to get the customer’s signature, and how long to drive to the next stop. They know each time a driver backs the truck up—a violation of UPS “methods.” They know about “harsh braking” and the amount of time the truck is idling.

Nichele Fulmore, a steward in Lumberton, North Carolina, says, “They know when the car cranks off, they know when you shut the door, when you scan that package. They can pinpoint you.”

Matt Taibi, a driver in Providence, Rhode Island, says some managers post drivers’ telematics readings, to show the worst offenders on each issue.

And the telematics reports provide fodder for zealous managers. “You can go through anybody’s records and find something,” says Fulmore. “Some managers want to pick out a minute here and a minute there” to question employees about. “As a steward, I step in and say ‘that’s ridiculous.’”

Now UPS is rolling out what TDU calls “telematics on steroids.” As it stands now, drivers are told, electronically, what order of stops to follow for the day. Under ORION, the technology—or a manager—will rearrange the route as the day progresses, taking even more decision-making out of the driver’s hands.

Drivers are buried in overtime. Eleven- and 12-hour days are common. Mark Cohen, a Brooklyn driver, says he often clocks out at 8:30 or 9 p.m., after an 8:30 a.m. start, drives 45 minutes home to Queens, and still sees the brown trucks in his neighborhood, delivering packages.

Theoretically, the contract contains a way for drivers to limit their hours to 9.5 per day (not including an hour’s unpaid lunch), outside the peak holiday season. If a driver experiences more than 9.5 hours three times in a week, she or he can go to management to request a shorter route. Then any time worked more than 9.5 is subject to triple pay.

But the request is the manager’s opportunity to tell the driver he should be doing the route in 8.5 hours—he must be shirking. He’s warned that putting his name on the 9.5 list will trigger tighter surveillance, both electronic and personal. A supervisor will often ride with the driver for three days, issuing a constant stream of encouragement to work faster.

What the request never triggers is a shorter route. So most drivers don’t bother to ask.

Taibi said, “In my center when someone requested 9.5, the center manager said, ‘Why don’t you get a piece of toilet paper to write it on, that’s all it’s worth.’”

And the local business agent advised against such requests, telling members, according to Taibi, “You don’t want to do that, you’ll put a target on your back, and there’s nothing I can do to help you.”

Nonetheless, Taibi and co-workers have just launched a 9.5 campaign, filing their requests along with grievances over other issues such as supervisors working, to emphasize that they’re serious.

TDU, of which Taibi is a leader, is calling for enforceable language requiring UPS to shorten routes when drivers request—and to hire more drivers when necessary.

Instead, Hall has reportedly negotiated a vague requirement to “maintain a sufficient workforce.”

Besides surveillance and overtime, the other issue for UPS drivers is what the company calls “dishonesty.” “They mean it to mean everything,” Cohen says. “They’ve categorized everything that doesn’t go by their rules and standards as being dishonest, and for that they are terminating people on the spot, with no progressive discipline.”

Cohen gives an example: A driver knows she’s too far away from a store on her route to get there before closing time. So she keys in “closed.” If the customer complains, the worker is fired for dishonesty.

Cohen says a warning would be the appropriate response—especially since supervisors often counsel drivers to take this shortcut.

Language added in the last contract allows management to fire drivers for dishonesty based solely on information gleaned from technology. This year the union proposed that such discipline be disallowed.

The part-time workers who load and unload the trucks are also subject to harassment, both “work faster” pestering and pressure not to report injuries. “A lot of our equipment is really unsafe, for a billion-dollar company,” says Rosemary Stedronsky, a 12-year part-timer in Ontario, California. “They’re not providing parts to the mechanics.”

And if a worker is injured, management will take him or her aside for a little talk, says Trujillo. “They’ll say, ‘why don’t you take a day off, go home and see what happens?’ But if you don’t file the injury report the same day, they come back with ‘maybe it didn’t happen here. Maybe you hurt your shoulder playing tennis.’

“A lot are convinced not to report. They’re told there will be a target on their backs.”

Steward Nick Perry, a package sorter in Columbus, Ohio, says repetitive motion injuries are by far the most common in his center. His job, for example, is to sort 1,500 to 2,000 packages per hour, moving them from waist level, on a belt, to eye level, on another belt.

A bump in starting pay is expected this year, but existing part-timers wonder whether they’ll get a raise, too. For many, the priority is a path to full-time jobs.

While members have mostly been kept in the dark about what’s on the table, TDU has put forth a contract scorecard listing what should be possible from an immensely profitable company, and claims credit for getting harassment, subcontracting, and part-time wages into the bargaining mix.

On a March 23 conference call with 2,000 stewards, Hall lambasted TDU for publicizing the call in advance, complaining that now management would know how to listen in—as if the call codes secret could be kept among the 4,000 stewards they were sent to.

UPS has forecast that its already beefy profits will rise 6 to 12 percent this year. At a dozen well-attended rallies held around the country in February, Hall reiterated his pledge not to make concessions. Bargaining is expected to wrap up in April.

A version of this article appeared in Labor Notes #409. Don't miss an issue, subscribe today.
Jane Slaughter is a former editor of Labor Notes and co-author of Secrets of a Successful Organizer.
Related
Labor Notes Conference 2022: It’s Gonna Be Big »
Here's What's in the New Bill Jointly Backed by Uber and the Teamsters in Washington State »
Rest in Power Mike Parker, 1940-2022 »
UPS Drivers Stage a Walk-in to Defend a Fired Co-Worker »
Auto Workers Win Direct Democracy in Referendum »