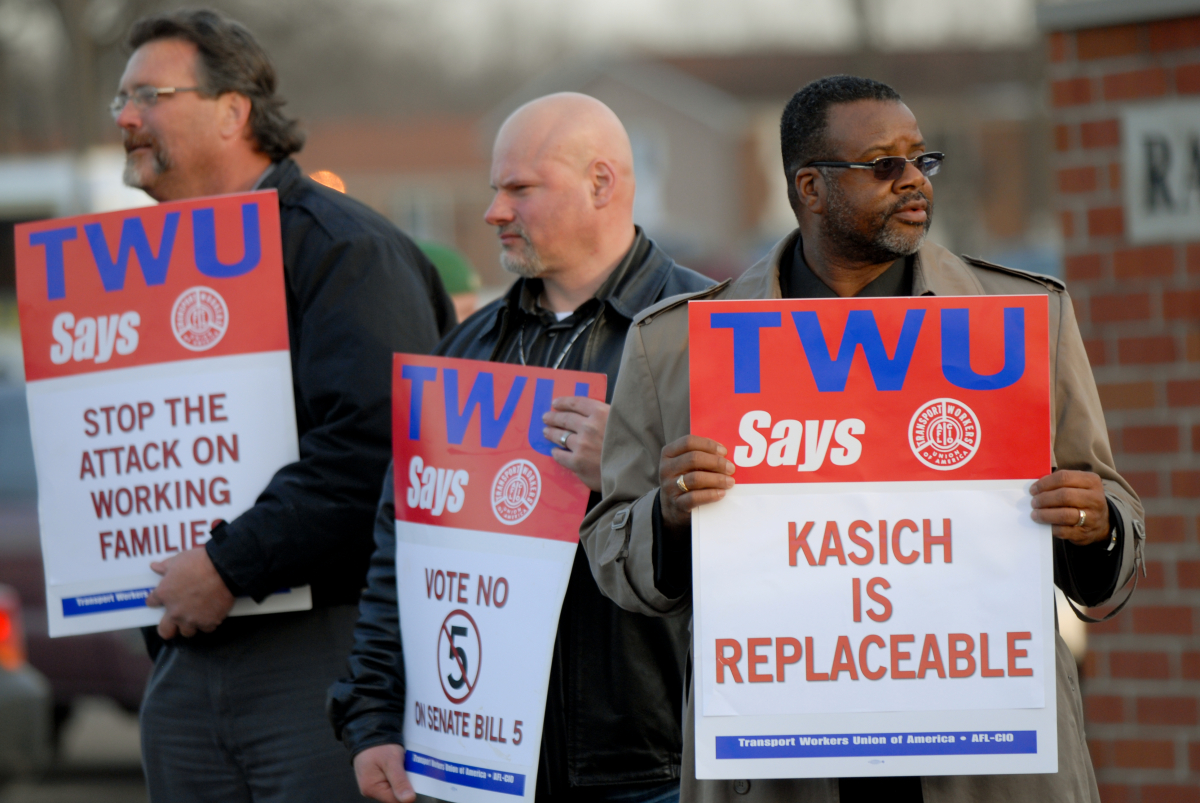 After a massive signature-gathering campaign, Ohio voters overruled the legislature and Governor John Kasich in 2011 with a 61.5 percent vote to restore collective bargaining. Such focused ballot initiatives can allow unions to avoid the messy and various reasons that people vote for candidates. Photo: Transport Workers Union.

Now that we’re well past the euphoria of election night, it’s time to consider what the vote really meant, and how unions can move forward.

First, it’s clear that we in labor can’t dedicate ourselves to “holding the president accountable” because Obama is not, in fact, accountable to us. He raised $1 billion for his re-election, and most of it was not from us.

We chose the lesser of two evils. Having won, we shouldn’t delude ourselves that, if we work him right, Obama could turn out to be really great. What we bought is four more years of the same crappy, disappointing government we had before.

America is an empire in decline. In the bottom two-thirds of the labor market, where jobs don’t require a college degree, things have been getting steadily worse for 40 years, and few people see a way out.

Economic decline produces fear, resentment, rage—and a politics that is combustible and unstable. Workers voice anger in many directions: against the banks and insurance companies, against public employees and immigrants. The economic elite works hard to ensure that resentment is directed at someone other than them, but it’s a force not easily controlled.

So we get contradictory results: 55 percent of Montanans voted for Romney, but 75 percent voted to say corporations are not people. Large majorities nationally think both that “big government” is a problem and that the country’s wealth should be much more evenly distributed.

The country is in a bad mood, and legitimately so. Our task is to help people find the clarity and courage to direct their anger at those responsible for their misery.

The conservative movement is multi-faceted, but the GOP machinery is ultimately controlled by a small circle of billionaires and multinational corporations.

When pollsters ask if we should sign a NAFTA-style treaty with Vietnam and Malaysia, no one is more opposed than Tea Partiers. Yet the base is rudely ignored; the interests of the Kochs and Waltons trump the nationalism of the rank and file.

The one-percenters control the party largely by keeping the base engrossed in non-economic issues: campaigns against abortion rights, gay marriage, and undocumented immigrants. The problem for the GOP is that now such campaigns seem likely to backfire.

Latinos are the fastest-growing ethnic group; young voters are more liberal than their parents, and every year, four million more of them join the rolls; population is shifting from rural areas to more cosmopolitan suburbs, turning places like Virginia and North Carolina into swing states; and women continue to prefer Democrats by wide margins.

The GOP has relied on social issues to keep voters in its column. But every year those social issues appeal to a smaller percentage of the electorate.

The social crusades continue partly because the elites know that working-class Republican voters are at odds with—or at least not excited by—the corporate agenda of the party’s rulers. The question for labor is how to exploit these contradictions.

Why can’t the Democrats be the party we wish they were? The simple answer is that they are too dependent on big money.

In 2010, Democratic candidates for Congress got ten times as much money from corporations as from unions. This reliance on corporate money renders the party’s message mealy-mouthed and ineffective.

Republicans self-consciously fight not just against Democrats, but also against the forces they perceive to be behind the Democrats. Grover Norquist identified unions, trial lawyers, and big-city political machines as key pillars of the Democratic Party. Republicans then set out to destroy unions, starve local government, and shrink attorneys’ fees through tort reform, in order to destroy the Democrats’ material base.

By contrast, the Democrats campaign only against Republicans themselves, not against the forces behind them.

If they didn’t need the money, Democrats could launch a campaign against the Chamber of Commerce—holding hearings on a series of bills that would expose the contradictions between corporate funders and working class voters within the conservative movement.

The conservative base hates “free trade,” for instance. If Democrats held press events in every district, standing in front of plants that shipped jobs overseas and challenging Republicans to disavow contributions from corporations that promote more NAFTAs, legislators would start feeling real pressure.

If this was followed by hearings on minimum wage, class size, and guest workers, we might do to the Chamber of Commerce what the right did to ACORN—make it toxic for politicians to be associated with it.

But Democrats will never take on this fight. Instead, they engage in a kind of political Stockholm syndrome, forever seeking opportunities to agree with the same corporate lobbies that fund their opponents.

WHAT WE CAN DO

There is no Master Plan that guarantees victory. But here are a few steps unions can take to move politics forward in 2013:

Focus on the states. The federal government is going to remain politically deadlocked. We should concentrate our resources where they can make the most difference.

When “paycheck protection” was first proposed, as a 1998 ballot initiative in California, it was supported by a majority of union members, who at first blush thought that requiring members’ annual written permission to spend dues money on politics sounded reasonable.

Labor worked hard to explain that the real purpose was to silence workers’ voice in politics. After the initiative was defeated, people who had started off supporting the measure but changed their minds were polled. Did they get their primary information from television, radio, mail, phone, or talking with a co-worker at work?

Talking with a co-worker was 20 points more effective than any other medium in changing people’s minds.

The core principle of union organizing is that people can change. Indeed, the work of organizing is almost nothing but that—helping scared people become brave, changing how people understand the boss and their own collective power.

But there’s no place for such transformations in traditional electoral campaigns, where voters’ preferences are treated as fixed and “messaging” is limited to superficial, poll-tested buzzwords.

Such campaigns do nothing to transform how people think about the economy, or to build organizations that last beyond elections. We need to initiate campaigns where we can engage in deeper education and build rank-and-file leaders in the process.

Since most unions’ political staffs come out of electoral politics, they often don’t understand workplace internal organizing. To do politics right, we must bring together political and organizing staffs that often operate on separate tracks.

Recruit members to serve as public ambassadors. Attacks on public employees are fueled by misleading propaganda about the nature of their work. Thus 80 percent of Americans think the public school system deserves a grade of “C” or lower, but the same number give their kid’s school an A or a B.

In other words, when people encounter the reality of schooling up close, they appreciate the work teachers do.

If each local teachers union, for instance, recruited 50 members who each committed to giving five presentations to Rotary clubs, church groups, or neighborhood associations—describing in unscripted terms what their job is like—we could establish a more realistic understanding of teachers’ work.

Such an undertaking would draw on our strength and leave the unions with stronger leaders when the campaign was done.

Campaign against the corporate lobbies. Unions need to do what Democrats cannot: run campaigns that directly challenge the corporate interests that stand behind the Republicans. We should promote common-sense reforms that benefit the vast majority even if unacceptable to big business.

Consider, for example, a proposal to undo state tax breaks for the rich and earmark the money for job creation or universal preschool.

As the American Legislative Exchange Council (ALEC) does for the corporate right, we should identify a set of proposals that can be advanced in multiple states.

Run offensive campaigns. The best vehicles for this are ballot initiatives, which avoid the messy and various reasons that people choose candidates. Note the failed recall of Scott Walker versus the successful referendum overturning Ohio’s union-busting law.

It’s easy for corporations to buy off legislators, but harder to sway the population on well-defined issues. In 2012 a number of red states passed progressive initiatives that directly contradicted the actions of their legislators. In deep red Idaho and South Dakota, for instance, voters overturned anti-teacher laws by wide margins.

While our recent political campaigns have shown what the labor movement is against, few non-members can say what we’re for—and many members are hungry to go on offense. It’s time to spell out our vision of how the economy should work.

Gordon Lafer is an associate professor at the University of Oregon’s Labor Education and Research Center. A longer version of this article is in the Winter issue of New Labor Forum.

A version of this article appeared in Labor Notes 407, February 2013. Don't miss an issue, subscribe today.
Related
Auto Workers Win Direct Democracy in Referendum »
Academic Workers Join Push for One Member, One Vote in the UAW »
Auto Workers to Vote on Direct Elections for Officers »
Viewpoint: The Battle Continues to Save the Puerto Rican Teachers' Pension »
We Need Democracy on the Job and in the Union, Too »