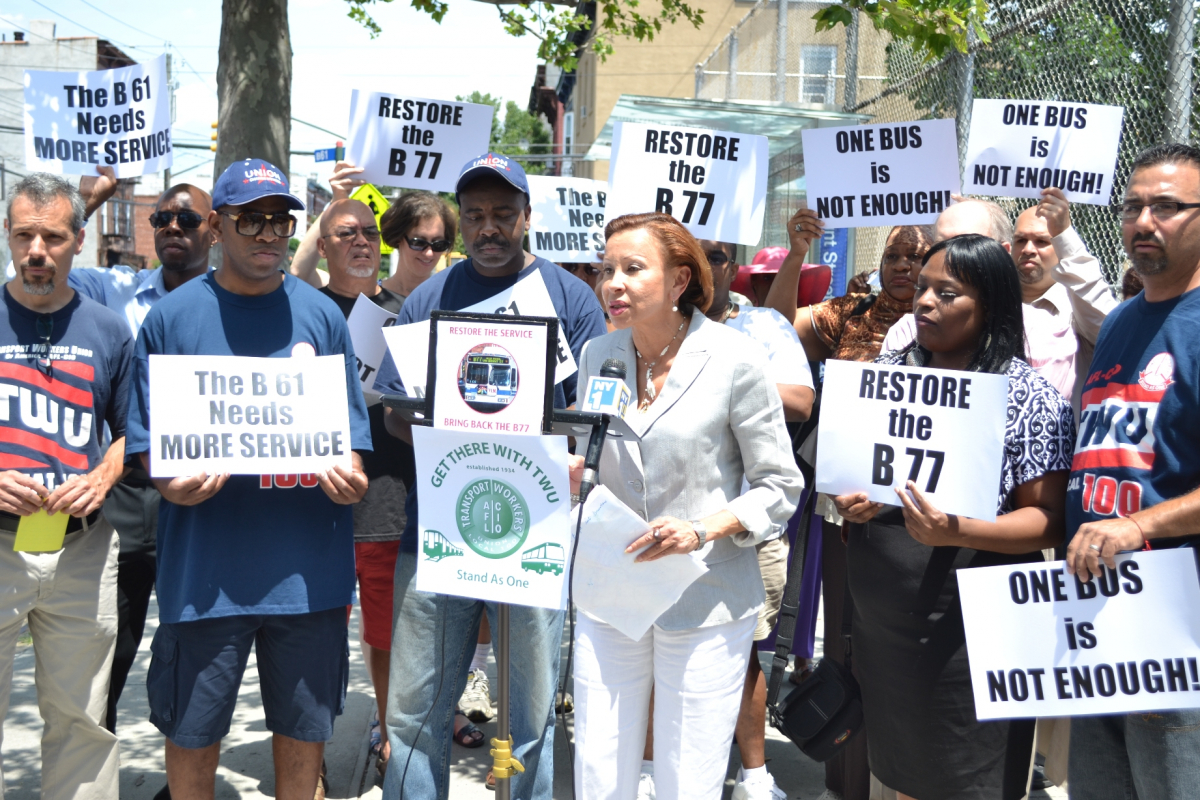 A hundred supporters came out to demand better bus service in Red Hook, Brooklyn. The Transport Workers local took the lead to organize in the community for more buses. Photo: Alan Saley.

New York City transit workers are allying with bus and subway riders for better conditions. Second in a two-part series.

New York City transit workers ran a winning campaign when we turned to community organizing in our fight against cuts in service.

The cuts to bus service were severe: 38 routes eliminated and 76 with shorter routes or shorter hours. Transport Workers Union (TWU) Local 100 fought the Metropolitan Transportation Authority every step of the way, protesting at board meetings and in front of the director’s house. And we managed to get our laid-off workers back over the course of a year.

But the local officers, headed by President John Samuelsen, had run on a promise to form coalitions with the riding public. We knew that to restore lost service, we’d have to involve the communities hit by the cuts.

When we did, we discovered an untapped resource of connections our stewards had—outside the workplace.

We decided to tackle the cuts in one community and zeroed in on a single bus line: the B61 in Brooklyn.

This line serves a racially and economically diverse community: from hipsters in railroad apartments to the working poor in housing projects, from working families in small rentals to the 1% in million-dollar homes. This meant a diverse coalition would be possible.

And the line’s failures had already been chronicled by a progressive city councilman and the transit advocate community. Riders were experiencing long waits, bunched-up buses, and severe overcrowding. The B61 was an ideal target.

We kicked off our effort with a month of education and outreach. Union staffers and officers from the local’s Brooklyn bus division visited four depots to talk with stewards. Most of their conversations focused on how the cuts had affected working conditions, how hostile the passengers were, how likely the rate of assaults on bus operators would grow, and how much interest members had in building common cause with the public.

We identified activists. At the same time, we were meeting with politicians to explain the issues and set up our opening salvo.

Our first meeting drew 15 bus stewards, who developed an organizing plan to win back service on the B61 and restore a lost line, the B77. Our message emerged from that meeting, too. The MTA had said it would ease overcrowding by adding one more bus during rush hours, so we ran with the phrase “One Bus Is Not Enough” and made that a centerpiece of the campaign.

We sent teams of two, in TWU Local 100 t-shirts, to visit bus stops along the route, leafleting riders and asking them to sign a petition for restoration of service. We told the public that just one more bus was a slap in the face.

One member of the team would address the riders, while the other would loop around and talk to the operator, encouraging them to keep working safely in the difficult conditions. A crowded bus with passengers “lips to windows” is harder to operate.

We talked about coming into each stop fully, kneeling the bus at every stop, and making sure operators prioritized their and the passengers’ safety over keeping to a schedule.

The B61 had already attracted media attention as the topic of Councilman Brad Lander’s report “Next Bus Please,” which chronicled the line’s failure to meet community needs. The report gave concrete recommendations for how to improve the line, and stewards used these ideas to generate conversations with riders and operators alike.

While the bus stop activity was in motion, one of the most active stewards began organizing in the housing projects of Red Hook, where his aunt was president of the tenants association. He initiated the campaign’s next step: a community meeting to get folks directly impacted by the service into a room together with politicians, union members, and community leaders.

Building on his ties in Red Hook—the community hardest hit by the B61 cuts—stewards and members of the tenants association door-knocked the projects and put up flyers and posters all over the community. We also asked for support from the Red Hook Initiative, a local youth group, and the Red Hook Civic Association, both of which turned out their members for the community meeting.

Internally we reached out to all TWU members who lived in communities served by the B61, whether or not they operated a bus.

The meeting filled the gym, and TWU officers facilitated a lively discussion of the MTA’s failure to serve their community. Alongside Councilman Lander were other state and city leaders who came out to support the call for more service.

SHOWING OFF OUR UNITY

The next week we convened a press conference, where over 100 people filled a Red Hook street in front of a public school, and TWU, alongside riders and politicians, demanded more service. We deliberately shifted the conversation away from defending what we had to saying what we wanted.

Next we were planning a big rally in front of the MTA, and had promised a free ride to the first 50 Red Hook residents who took the B61 to the site—but alas, management stole our thunder. The MTA freed up some money and restored much of the lost service. A second bus was rerouted to pick up folks in Red Hook and additional runs were added to the B61.

It was a huge victory. So, rather than rallying, we celebrated.

We have since replicated the campaign out of other depots, although New York bus service is still far from what it needs to be. We have to keep organizing community members if we want to keep winning.

But one thing we learned, when we took the time to know each other, was that our stewards bring far more to the table than knowledge of their jobs. When we started looking for the community connections that would form the building blocks of the campaign, what we needed was already in the room.

Read about another winning Local 100 campaign that united workers and riders here.