Will Social Security Get Tossed Off the Fiscal Cliff? 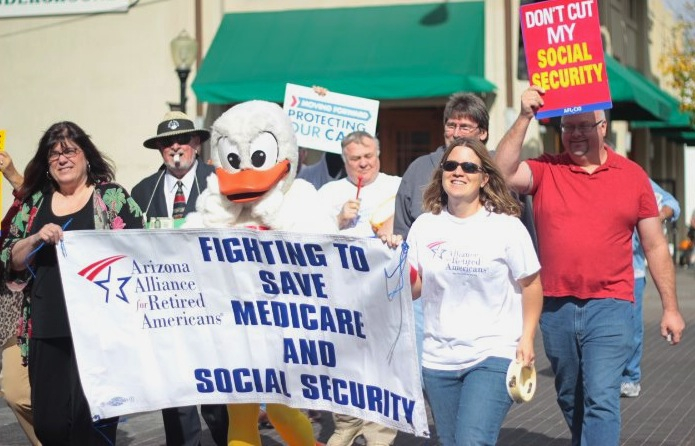 Advocates of Social Security are holding informational pickets today at 100 Social Security offices in 22 states. They’re led by workers from inside the offices themselves, who know firsthand how much the monthly check means to retirees and people with disabilities.

The AFL-CIO is promoting more actions, including visits to Congress members’ district offices, on December 10. The goal is to keep Social Security, Medicare, and Medicaid out of negotiations over the fiscal cliff. (See Fiscal Cliff or Fiscal Bluff?)

Congressional Democrats appear divided on whether cuts to Social Security should be part of the all-important negotiations with Republicans this month.

Steny Hoyer, second-in-command in the House of Representatives, acknowledges that Social Security cuts can’t logically be used for deficit reduction (as Social Security doesn’t contribute to the deficit). But Hoyer says he is still open to cuts, such as changing the Social Security cost-of-living allowance, “to ensure it remains strong for future generations.” This backwards idea that the program can be kept strong by cutting it relies on the often-repeated—but false—talking point that Social Security is about to go broke.

Senate Minority Leader Harry Reid, on the other hand, has said he’s against throwing Social Security into the mix.

The AARP, which has not always been stalwart in defending the program its members depend on, this time is weighing in strongly against cutting cost-of-living or increasing the Medicare eligibility age.

The White House said recently that Social Security doesn’t contribute to the deficit—it has its own funding stream in the form of payroll taxes. But it’s not clear whether this fact is enough to keep President Obama’s negotiators from giving the Republicans some of what they want, in exchange for letting the Bush-era tax cuts expire for the wealthy.

Even if the immediate disaster of cuts for beneficiaries is avoided, say members of the Government Employees union (AFGE ), the Social Security commissioner, backed by influential members of Congress, has a long-range plan to undermine the program from within.

Management is making the program less efficient and less user-friendly, and enforcing methods that wrongly lower benefits, while politicians nurture the seed of doubt that Social Security can last. Undermining public confidence in the program would make Americans more willing to let privatizers have their way—turning over management of individual accounts to Wall Street and generating billions in profits.

Social Security unionists say these threats to the program are more subtle than benefit cuts but just as insidious over the long run.

Jim Campana is an officer of the AFGE council that represents Social Security workers nationwide. After President George W. Bush lost his bid to privatize the program in 2005, Campana says, “the first thing he did was destroy the security part of Social Security. It used to be that people knew it would be there for them. Now nobody believes that.”

Dana Duggins, also from AFGE Council 220, said agency administrators have been on a mission “to strip away the reasons why the public rejected privatization.”

In an email yesterday, AFGE President J. David Cox warned that, with 10,000 new people becoming eligible for Social Security each day, “applications and appeals are backlogged, eligibility reviews are being postponed indefinitely, and offices across the country are being shut down. Americans filing for retirement, survivor, and disability benefits are forced to stretch their savings while sometimes waiting years for their benefits or coverage.”

Michael Astrue, the Social Security Administration (SSA) commissioner appointed by Bush—and still in office till next month—went full throttle with an internet claims system, where those seeking retirement or disability benefits fill out forms online.

But with I-claims, Duggins says, “85 percent of the time the person is disadvantaging themselves. They complete the information based on what their neighbor told them. They're guessing.”

The commissioner has insisted that employees not question information on the applications. “He says everybody these days has their own financial advisor,” Duggins said. “This is the elitist attitude he works from.”

AFGE has surveyed claims representatives, who receive 12 to 16 weeks of intense training to know the system, and found them unhappy with I-claims.

“We are trained to pay the right person the right amount at the right time and not play games with people’s livelihoods,” Duggins said. “The old-timers have always had the ethics of going the extra mile to make sure you're being paid correctly. Now the policy’s changed to ‘you no longer question this.’

“We have employees all over that take the effort to do it anyway.”

Employees are supposed to review online claims, but only by working them in around their face-to-face appointments—and both personnel and overtime have been cut drastically. SSA will soon be down to 45,000 AFGE-represented members, from 53,000 in 2010. Overtime was cut to 17,000 hours this year, less than a half-hour per worker per year, and will be zero in the next fiscal year.

Offices are also closing to the public a half hour earlier, and at noon on Wednesdays starting January 2.

To top it off, as of October 1, taxpayers are no longer mailed annual statements of their accumulated benefits. “That benefit statement reiterates to young folks, ‘you are getting something back,’” Duggins said. “Take that away and it allows for the doubts to creep in.”

Astrue says he’ll save $70 million by canceling the paper statements. But employees doubt that saving money is really his top priority—since he’s also building a $55 million fence around headquarters.

Watch AFGE’s video on what cuts to Social Security would mean here. Call your Congress members at 888-659-9401.

Jane Slaughter is a former editor of Labor Notes and co-author of Secrets of a Successful Organizer.
Related
New York City Retirees Fight to Defend Their Medicare Benefits »
Get Fossil Fuels Out of Our Pension, Say Environmental Protection Workers »
A Common Defense: Mobilizing Veterans in Labor to Beat Trump and the GOP »
Racial Disparities in COVID-19 Point to Need for Medicare for All »
How Medicare for All Would Fix Both Public Health and the Economy »