Right to Work Looms in Michigan 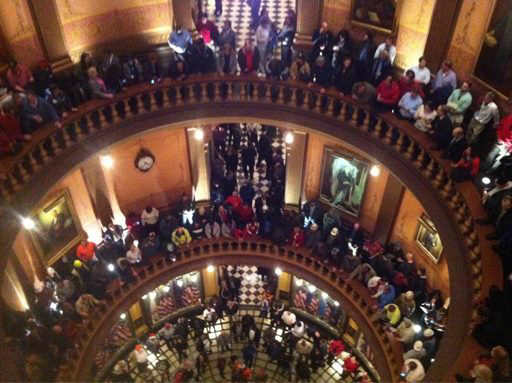 Michigan unionists packed the rotunda of the state Capitol in Lansing yesterday but the House passed a right to work bill. Protests are planned there for Tuesday. Photo: AFT Michigan.

Michigan unionists rallied and lobbied in the state capital yesterday to prevent right-to-work legislation. A bill has passed the House and Senate, and fear is that the governor will sign the bill during the lame-duck session. Republicans will lose five seats once the new legislature is seated in January, making defeat of right to work much more likely then.

Capitol police evicted some protesters yesterday, with arrests and Mace, and closed the building.

Here a member of one Michigan union explains how a state that was considered a union bastion came to this point.

Earlier this year I stood on a street corner, holding a clipboard for Proposal 2 and hoping that Michigan would be a trailblazer: the first state to make union rights constitutional rights. Today, I’m filling my tank for the drive to the state Capitol in Lansing, with the apprehension that Michigan will become the 24th state to end unionization as we know it.

The Republican-dominated legislature is poised to adopt “right-to-work” legislation. Yesterday hundreds of workers convened in the Capitol rotunda, chanting “hey hey, ho ho, right to work has got to go.” How did we get here?

Perhaps it began one state over, in Wisconsin. Michigan’s Governor Rick Snyder learned from the mistakes of his neighbor across the lake, Scott Walker. When Walker attacked unions in Wisconsin with a bludgeon, provoking intense opposition last year, Snyder was watching. He saw the powerful reaction of union-loyal Midwesterners faced with a clear threat.

So instead, Snyder and his allies in the legislature pursued a strategy of a thousand cuts. Instead of introducing a bill that would affect all unions, the Michigan legislators did it piecemeal: taking away teachers’ automatic dues deductions, defining university research assistants as non-workers, and other measures that wouldn’t rile everyone at once.

Michigan labor went on offense, to pass a constitutional amendment that would have nullified all those laws-of-a-thousand-cuts and insulated us against new legislative threats, including “right to work.” We collected thousands of signatures for Proposal 2, made thousands of phone calls, and knocked on thousands of doors. In the week before the election we were neck and neck in the polls. And then Proposal 2 was defeated—57 to 42 percent.

There are many theories why we lost Proposal 2. Perhaps there were too many proposals on the ballot, perhaps it was the misleading ads financed by corporate interests, maybe we weren’t explicit enough about the threats to labor and the protections enshrined in the proposal.

Regardless, one month later, Governor Snyder, who previously had called right to work “divisive” and said it wasn’t a priority, now says he’ll sign this legislation if it crosses his desk during the lame duck session. The Chamber of Commerce is pushing it. Right-wing activist Dick DeVos of the Amway fortune started airing statewide TV ads Tuesday. The Republicans control both houses of the legislature and have the votes.

So where does this leave us? What’s on the table is the disappearance of union jobs from Michigan and the standard of living they have given workers, union and non-union alike. Last year Michigan was the state with the fifth highest percentage of unionized workers, according to the Bureau of Labor Statistics.

Back from Lansing, Liz DeLisle Rodrigues, communications chair of the Graduate Employees Organization, Teachers Local 3550, reported on the broad spectrum of workers who were there—teachers, electricians, construction workers, service workers, nurses, and more. Rodrigues observed simply: “Working people are getting the word out and banding together to fight.”

See you at the Capitol.

Alix Gould-Werth is a member of the Graduate Employees Organization, Teachers Local 3550, at the University of Michigan.