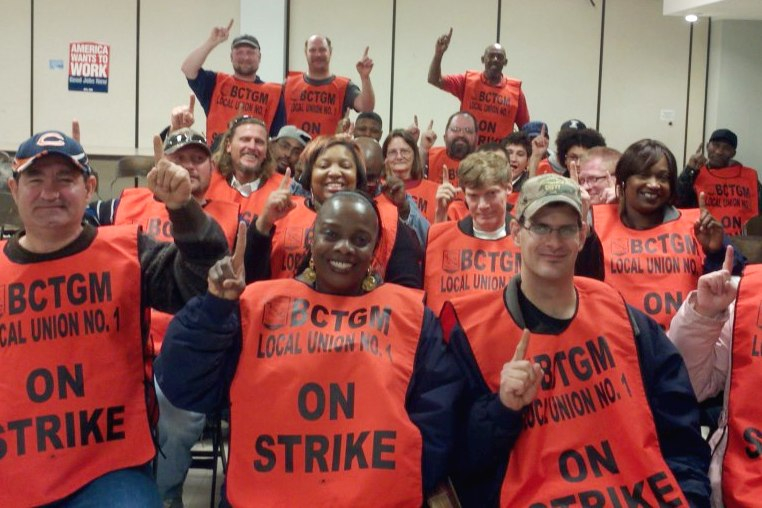 Bakery workers struck the Hostess production facility in Peoria, Illinois in November. The bankrupt company decided to liquidate its assets, and blamed the workers for refusing another round of deep concessions. The workers countered that they'd rather organize under the company's new owners than work under the proposed contract. Photo: BCTGM.

It was a depressingly familiar scenario. Decades of mismanagement had driven the maker of Twinkies, Wonder Bread, and other Hostess treats into bankruptcy for a second time. The company’s private equity owners were demanding massive concessions and threatening to shut the company if unions did not agree.

Workers could fight the concessions and likely see the company sold to unknown bidders. Or they could take the cuts, save their jobs for the moment, and likely watch the company bleed to death under debt and mismanagement.

The Teamsters, representing mostly delivery drivers, took management’s deal. The Bakery union members, the ones who baked the snacks, rejected it and went on strike.

“I’m better off looking for work and fighting to keep Wonder Bread in a union rather than getting what they offered us and spending the next five years in poverty,” bakery worker Mike Hummell told Truthout. “I have a total lack of confidence and faith in these owners.”

The owners decided to close all the plants and sell the company. Some 18,000 workers are out of a job; their pensions are frozen; their union contracts are null and void, for now.

Already, dozens of firms are bidding to buy Hostess. Soon, a buyer will emerge, reopen most of the plants, and hire back most of the workers. Only time will tell whether the union’s stand will help Hummell and his co-workers win a decent contract under the new owners.

What might the Hostess workers have done to avoid the dilemma in the first place? What can workers do when owners are loading a company with debt, sucking out resources in the form of bloated executive salaries and dividends, refusing to invest in improvements, failing to develop new products, and generally running the company into the ground?

To start, they must understand the ownership structure and business model of their company.

At Hostess, that meant understanding how private equity firms work. These firms buy companies by borrowing huge amounts of money, change the management, slash costs—especially wages, health, and pensions—to pay back the borrowed money, use any remaining cash to pay themselves huge dividends, and then resell the company. And they get huge tax breaks in the process.

At Hostess, the gamble failed twice despite deep worker concessions, first when private equity investors could not get the company out of bankruptcy for five years between 2004 and 2009, and then again in 2012.

DEVELOP OUR OWN PLAN

Once workers understand that owners have no interest in the long-term health of the company, the next step is to develop an alternative business strategy.

At Hostess, both the Teamsters and the Bakery workers had such a plan. For nearly a decade, they tried in bargaining to get the owners to reduce debt, upgrade plants, create new products, increase marketing and advertising budgets, and hire experienced bakery executives. But owners are under no legal obligation to bargain these issues, and the firms that owned Hostess refused.

In such situations, unions have to try to force owners to change. The mobilization necessary to do so must start long before bankruptcy raises its ugly head.

One step is educating members, giving them an alternative vision of how the company might be run and what their collective power might accomplish.

That’s what the Teamsters, under different leaders, did to prepare for their historic 1997 strike at UPS. The union spent many months building rank-and-file support for full-time work and preparing workers to strike. The strike forced UPS to create 20,000 full-time jobs.

An educated and inspired rank and file can take all sorts of actions to pressure the company to change its strategy. At the workplace, these include educational pickets, work-to-rule campaigns, and even work stoppages.

The Bakery workers went on strike at the final hour. But what might they have accomplished if they’d started earlier? It’s possible to imagine a long-term, comprehensive campaign, together with the Teamsters and community allies, aimed at compelling Hostess’s owners to adopt a different approach to the business and the union.

Workers would need a clear vision around which to organize, and that vision would have to include the needs of community allies. A fight focused solely on workers’ needs will not resonate the way a struggle to save a community institution can. Again, the 1997 Teamsters strike at UPS is an example. Its slogan was “Part-Time America Doesn’t Work,” which millions of people could relate to.

At Hostess, whose products are iconic American brands loved by millions, a campaign to safeguard Twinkies from private equity vultures might have had the dual impact of winning public support for the workers and angering management by interfering in its relationship with its customers.

The fact that consumers started hoarding the famous snack cakes during the Bakery workers’ strike suggests the potential.

And unions can target owners for a broader campaign that exposes how destructive the private equity business model is: how it reduces income for the community as a whole, shrinks government tax revenue and starves the public sector, forces workers onto public assistance, and accelerates inequality.

Since the Occupy movement and Mitt Romney’s run for president, this message is resonating more forcefully. Many groups, including unions, are now fighting to eliminate private equity’s special tax breaks.

One tool in the campaign against private equity firms should be workers’ pension funds. A number of pension funds, including huge public funds in California, Florida, and New York, were investors in Ripplewood Investments, one of the firms that owned Hostess.

Such investments are quite common. In fact, without pension funds, private equity would be about half its current size.

Yet pension fund managers rarely recognize the self-destructive absurdity of investing in a business model that strives to slash or eliminate pensions. Only in a few cases, during contract fights or organizing campaigns, have pension funds threatened to cut their investments in private equity firms that did not reach agreement with workers.

Doing so is not easy, given the governance and legal obligations of pension funds, but it can be done.

In part as a result of these campaigns, the California Public Employees’ Retirement System, the largest pension fund in the country, now has a “responsible contractor” policy. Janitorial and other service providers to CalPERS-owned buildings are required to pay “a fair wage and a fair benefit” and remain neutral in union organizing drives.

At a relatively small private equity firm like Ripplewood, the possibility of lost pension fund investments, backed by worker mobilization, could have had considerable influence.

What if the pension funds aren’t interested in helping? Delegations of workers can visit their meetings or target the fund’s trustees, many of whom are union officials.

PRESSURE FROM ALL SIDES

A combination of tactics that pressure the company at the workplace, in the community, and in the boardroom has a chance to alter the private equity owners’ calculations of their best interest.

Facing labor unrest that could reduce the value of their investment, loss of future investment by pension funds, and lost sales due to community anger, private equity managers are more likely to negotiate—or sell to owners who will.

Eric Blair is the pen name of a union researcher and organizer.