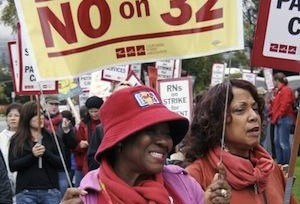 California voters will decide whether unions can use money for politics if it's collected by payroll deduction. Under the fake equality of corporate-backed Proposition 32, corporations wouldn't be able to either, but they don't use this method anyway. Photo: California Nurses Association.

A California ballot initiative stands poised to fundamentally alter national politics—even if it loses tomorrow. It will do so even if the details of its language are ignored elsewhere. Proposition 32 proposes to disallow either unions or corporations to use mandatory payroll deductions for political purposes.

Of course, union dues through payroll deductions are unions’ major source of funding, while virtually no corporations collect political money from their employees this way.

If Prop. 32 spreads, it will be following a precedent set in California in 1978. Then, voters passed Proposition 13—a ballot initiative that rolled back property taxes to 1975 levels and capped future increases at two percent. More destructively, it mandated that all future tax raises in the state be approved by the legislature by a two-thirds margin.

The law presaged a wave of anti-taxation measures across the country that continues to define the political landscape we inhabit to this day. Ironically, while Prop. 13 was an effective carrier of the anti-taxation message, the rest of America soundly rejected the draconian policies Prop. 13 put into place to block the raising of tax revenues.

“The specifics of Prop. 13 were largely not adopted in other states,” explains Lenny Goldberg, executive director of the California Tax Reform Association. “Hardly any states enacted the two-thirds majority rule. But in a broader sense, the anti-tax movement certainly took off from that point. There’s no question Prop. 13 made a huge contribution to where we are now.”

Prop. 32 goes further than many “paycheck protection” initiatives that have been floated by national conservative groups since the early ’90s. Paycheck protection laws typically forbid public employee unions to use dues for political purposes without a member’s written consent.

Utah, Idaho, Wyoming, Ohio, Michigan, and Washington are currently the only states where paycheck protection measures have become law. A study conducted by the conservative Heritage Foundation shows that union donations to political campaigns in these states dropped 50 percent after the measures were imposed. Alabama, Arizona and North Carolina passed paycheck measures in 2011, but those measures are currently held back by legal challenges.

According to John Logan, Director of Labor Studies at San Francisco State University, the first paycheck protection measure originated in the state of Washington in 1992. It passed, severely weakening that state’s unions. The measure’s admirers in other states were buoyed by this success. “By the late ’90s,” says Logan, “paycheck protection had become part of the national conservative movement.”

Indeed, the powerful conservative lobbying group American Legislative Exchange Council (ALEC) drafted and endorsed paycheck protection model legislation on May 30, 1998. Months later, a virtually identical version wound up on the California ballot in the form of Proposition 226. It failed by a six percent margin.

“The defeat of 226 in California robbed the paycheck protection movement of momentum,” says Logan. Though conservatives continued pushing similar bills in the decade that followed, the measures were unequivocally defeated across the country.

That all changed, however, in 2010, when the financial crisis and accompanying nationwide budget deficits provided conservatives with the pretext they needed for an assault on unions—especially those representing public-sector employees.

“Six hundred and seventy new Republican legislators came into office after the 2010 election,” says Mary Bottari of the Center for Media and Democracy, which has done extensive research into ALEC and its political influence in Wisconsin and throughout the nation. “They took control of 26 states. But before they did they all went flocking to ALEC.”

According to Bottari, on December 3, 2010, incoming Republican freshman legislators attended a large ALEC gathering to coordinate strategies. “The primary issue,” she says “was these union–busting measures like right-to-work and paycheck protection. They got their marching orders and modified ALEC model legislation to local circumstances.”

However, Raphael Sonenshein, executive director of California’s Edmund G. “Pat” Brown Institute for Public Affairs, points out that, like Prop. 13, the idea of Prop. 32’s actual language being replicated across the country is unlikely.

Instead, argues Sonenshein, Prop. 32’s legacy—win or lose—will be the massive amounts of money spent by shady, anonymous political action committees to pass similar legislation. In the post-Citizens United world, where unlimited and untraceable donations from corporations and wealthy individuals have become a reality, conservatives and activist billionaires have shown they have the will and the resources to launch non-stop attacks on unions and progressive causes.

“Private entities are forcing labor to defend itself from a volume of money that is overwhelming,” he says. “Measures like 32 weaken labor for future elections and divert attention from other more proactive races unions consider important.”

Bottari agrees: “Part of the strategy nationally is to engage unions in a whack-a-mole game. Unions have a difficult time mobilizing support for other issues when they’re facing fights in all these states at the same time.”

In California, for instance, labor has not been able to provide the kind of support it would have for Governor Jerry Brown’s Proposition 30, which proposes increasing taxes on the wealthy to raise money for public schools, had the dire threat of Prop. 32 not been present.

Prop. 32, therefore, is a win-win for its backers. With the Supreme Court’s Citizens United ruling laying the legal framework, and a nearly unlimited supply of funding available from willing arch-conservatives like the Koch brothers, expect to see this trend repeated across the country. In liberal states like California, such efforts will handcuff progressive legislation from going forward. In less union-friendly states, these measures could win out over time.

“A bad argument repeated can ultimately be effective,” says Sonenshein. “The backers of Prop. 32 have the mindset that you just have to win once. If you keep putting it on the ballot, you may eventually find an election where labor simply isn’t as well organized to defeat it.”

In other words, even if Prop. 32 fails in California in 2012, the constant threat—and likely reality–of similar initiatives being repeatedly put on the ballot will tie down union resources and influence across the country. Win or lose, its impact will be felt around America for years to come.

Matthew Fleischer is an award-winning investigative journalist, a former LA Weekly staff writer, and an editor at FishbowlLA. A slightly different version of this article appeared on Frying Pan News.

The Ontario PC Party released a policy document last spring that said, among many other anti-labour things, they wanted to repeal automatic dues check off. They're in opposition right now but are leading the polls and could win a majority in the next election (which could happen anytime because the minority Liberal government is without a leader and deeply unpopular).

If this goes down in California it will likely influence the right in Ontario, which means all of Canada will be affected and other right-wing governments, like Saskatchewan's, will follow suit. It's worth noting that this policy document was deeply influenced by Walker's "reforms" in Wisconsin. Canadian trade unionists really to pay attention to what's going on in the US.