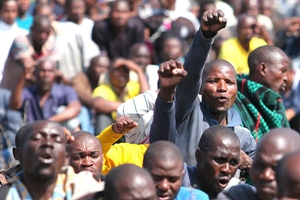 South African miners won a dramatic pay increase in September, following a wave of strikes that spread to many gold and platinum mines, but their struggle exposed fractures in South African society that won’t heal soon. Photo: Gallo Images/Alamy.

South African miners won a dramatic pay increase in September, following a wave of strikes that spread to many gold and platinum mines. But their struggle exposed fractures in South African society that won’t heal soon.

The strikes grew after an August massacre by police that left at least 34 dead. Human rights advocates have brought forward evidence and eyewitnesses saying police shot miners as they attempted to surrender or flee.

Tens of thousands of miners suspended work for six weeks in wildcat strikes, halting production in a platinum industry responsible for 80 percent of global output. The government put the military on alert and cracked down on “illegal gatherings,” halting a march.

Platinum miners returned to work in mid-September, but 15,000 gold miners continued their wildcat as a mine owner resisted the wage trend.

The conflict has its roots in tectonic shifts in South African society, its union movement, and its crucial mining sector. Almost two decades after liberation from white minority rule, unemployment hovers around 25 percent, old forms of exploitive migrant contract labor persist, and the country has been convulsed by near-daily protests over the government’s failure to deliver basic services.

For some observers, the mine massacre has become a turning point for a country struggling to make its way since a movement fusing Black liberation, radical politics, and militant unionism upended apartheid in 1994. They have called into question the legitimacy of the ruling African National Congress.

“By sending police to attack workers, the ANC moved to defend the new elite in South Africa: old white business owners garnished with a sprinkling of politically connected Blacks,” said Leonard Gentle, director of the International Labour Research and Information Group in South Africa. “The ANC is stepping squarely into the shoes of its apartheid predecessors, acting to secure the profits of corporate mining interests through violence.”

Others trace the origin of the conflict to the mine corporations’ plans to divide union strength.

Mine bosses have acted to undermine the master agreement that coordinated bargaining in the minerals sector by aiding the breakaway Association of Mineworkers and Construction Union, said Sidumo Dlamini, president of COSATU, the major union federation in South Africa, in a speech.

Dlamini accused mine bosses of fomenting the split by ignoring contracts and “developing a resignation form, parading and forcing members to resign” from the COSATU-affiliated National Union of Mineworkers. The AMCU now claims a membership of 30,000 workers at coal, chrome, and platinum mines, and is recruiting at gold mines. Before the recent strikes, NUM’s membership was 300,000.

Dlamini accused “individuals” affiliated with the breakaway union of coercion and violence, saying NUM officials have been “attacked in their office, forcefully removed, the offices keys handed over to management.” AMCU officials called that a lie and defended their willingness to strike as more effective for workers than NUM’s more cooperative approach.

COSATU and its allies have charged the rival with being a company-financed “yellow union,” pointing to a history of shadowy groups in the mining camps that try to play off different unions and workers against each other.

But COSATU’s own founding president, Jay Naidoo, has rejected such claims.

“Let us ask ourselves if splinter unions are just the work of opportunists,” he wrote in an open letter to his former colleagues. “Are we saying that seasoned trade unionists are so weak, pliant and intellectually inferior that they will risk losing their jobs and their lives—and for what?”

Naidoo said established unions like the NUM are no longer a visible force in the workplace, adding, “The fact is that there is a deep and growing mistrust of leaders in our country, and the expanding underclass feels it has no voice through legitimate formal structures.”

Gentle says changes in mine work and union membership have generated friction.

Much of the hard work underground is now done by contract workers, he says. These are the most exploited and insecure workers, who work the longest hours and have short-term, unstable jobs. The mine companies exploit divisions by recruiting along tribal and regional lines.

NUM grew out of the less-skilled job categories of South African mineworkers, Gentle says. But they make up just 40 percent of the membership now. An increasing portion of the NUM’s membership is skilled, higher-level mining staff, who dominate the union’s structures.

The shifting composition of the workforce affected union decision-making. According to the trade journal Miningmx, NUM stipulated a 50 percent plus one member threshold for recognition in 2007 contracts, foreclosing any way for workers to form new unions and challenge the company-recognized NUM.

NUM has also struck deals that benefited more skilled workers. One such agreement sparked a strike at another platinum mine earlier this year, after rock drillers learned they had been denied an 18 percent bonus granted to other workers.

Gentle says NUM is becoming a union of white collar above-ground technicians, which led to the formation of the AMCU in 2001.

The breakaway sped up when NUM ousted a popular leader in the platinum sector who now heads the AMCU.

COSATU says it faces a “coordinated political strategy to use intimidation and violence, manipulated by disgruntled former union leaders.”

Critics, like South African analyst Dale McKinley, say it is hypocritical of COSATU and its allies to call for organizing vulnerable contract workers and then slam another union for actually attempting to.