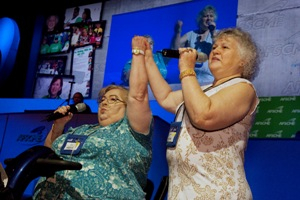 A Missouri home care consumer and her caregiver celebrated an AFSCME union victory in 2010. The government is foot-dragging on a rule that would give home care workers overtime pay. Photo: Jim West/jimwestphoto.com.

Why do Democratic administrations fear to recognize the labor of care?

Once again the Democratic leadership is wavering at a crucial moment, and could fail to grant home care attendants and aides the right to overtime pay and the minimum wage.

These front-line caregivers ensure that frail elderly and disabled people can remain at home and avoid institutionalization. They help with bathing and dressing, feeding and walking, taking medicine and going to doctors, and they perform household chores.

During the Clinton years, the Department of Labor proposed to end the “companionship exemption” that since 1975 had wrongly removed home care workers employed through agencies from the Fair Labor Standards Act (FLSA). But after objections by some advocates for developmentally disabled people, who argued that higher wages would limit the amount of care available, the DOL withdrew its proposal in the mid-1990s and went back to the drawing board.

For the next decade, home attendants and aides remained the invisible workers of the welfare state, caring for elderly and disabled persons under Medicaid and other public programs without any guarantee of fair compensation—unless they happened to be in one of the dozen or so states that eventually recognized their unions. Since that time, home health care has become the fastest-growing workforce in the nation.

False claims and an opportunistic sleight-of-hand lay behind the denial of labor rights for home care workers.

When Congress extended FLSA’s minimum wage and overtime protections to private domestic workers in 1974, the DOL cut home care workers out of the new amendments. It distinguished home care attendants from housekeepers, though as anyone who did the job could have told them, home care work requires both intimate care of the person and care of their home environment.

The move equated women who labored to support their families with part-time, teenage babysitters, who were also exempt from FLSA. DOL went further, actually removing workers employed through agencies from coverage. These caretakers are workers, not mere friendly neighbors, volunteers, or “companions.” They have been compelled to put in many extra hours off the clock.

Three years into his administration, President Obama finally offered his own proposal to rectify this injustice.

Prepared with a detailed cost/benefit analysis backed by substantial research, the DOL opened an extended comment period that closed in March. Two-thirds of 26,000 comments favored the change, which the government estimates would win the workforce an additional $35- $215 million a year.

Although the rule change would by no means reach all, especially since so many attendants work off the books, it was expected to apply to about two-thirds of the 1.8 million care workers, both those employed through agencies and those working for publicly funded programs. Four-fifths of home care funding comes from public sources.

Weeks went by, and now the proposal is in limbo, stuck within the DOL and not yet accepted for review by the Office of Management and Budget, which must give a final assessment of its fiscal impact on government and business.

This latest round of struggle and stalemate comes at a moment when labor rights are being challenged for ever more types of workers. Union bargaining rights for home care workers have been stripped or curtailed in Wisconsin and Michigan, and the National Right to Work Legal Defense Fund has petitioned the Supreme Court to consider the very legality of home care unions.

The home care franchise industry, estimated to be worth $84 billion, has mobilized its Republican defenders against the new rule. The Obama administration, meanwhile, has been thrown off balance by pushback from elsewhere. Again, some disability advocates fear they will have fewer funds available if their attendants must be paid overtime.

The DOL has incorporated complaints of the independent living movement by saying some “companions” hired directly by clients won’t be eligible for protections.

Another roadblock is cash-strapped California, where public administrators of home care apparently are balking at the cost of reconfiguring worker hours to avoid overtime, which they don’t think they can afford.

California certainly has its budget woes, but Democratic Governor Jerry Brown has never been generous to home care, which he perennially tries to cut to soften the state budget deficit. In an election year, Obama might not want to upset Brown. He also might not want to open another line of Republican attack by making more workers eligible for overtime pay.

Politicians, judges, family advocates, and public commentators have always cast home-based long-term care as a zero-sum game: Either clients get more access to care, or workers get better wages, but not both.

Even Supreme Court justices appointed by Democrats buy into this equation. In response to the lawsuit of Jamaican immigrant Evelyn Coke for back pay for years of unpaid overtime, Justice Stephen Breyer claimed that millions of people would not be able to afford home care if they had to abide by the nation’s wage and hour law. These arguments imply that denial and self-sacrifice should be part of care work.

The answer to our long-term care challenges is not cheap labor and impoverished caretakers. If home-based care labor is recognized as real work and legally classified as such, then we can focus on a genuine long-term care policy. Divided, we bicker over an underfunded service; struggling together we win better care—and improved wages.

Will home care workers again be denied their rights? If Mitt Romney wins the White House, not only will this initiative be dead in the water but Republicans in Congress likely will have the votes to cement the companionship exemption into law. Already they have introduced bills to permanently classify aides and attendants as companions rather than as workers.

The first time that the rule ran up against a Republican victory was a tragedy for these low-waged women. The second time it would be a farce—preventable if the Obama administration would actually act.

Contact OMB Director Jeffrey Zients to demand the agency take up the rule immediately, at ombdirector [at] omb [dot] eop [dot] gov or 202-395-4840.

Eileen Boris teaches at the University of California, Santa Barbara, and Jennifer Klein at Yale. Together they authored Caring for America: Home Care Workers in the Shadow of the Welfare State.