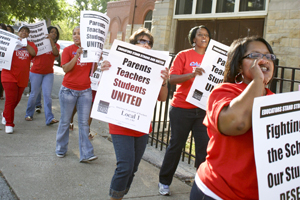 After weeks of stalled negotiations with the school board, the Chicago Teachers Union is inching ever closer to a strike, as educators say they are willing to fight to get appropriate services in all schools. Photo: CTU.

Chicago teachers starting back to work this week might not want to get too comfortable in their classrooms. After weeks of stalled negotiations with the school board, the Chicago Teachers Union is inching ever closer to a strike.

On Wednesday the union’s House of Delegates authorized President Karen Lewis to give the board a 10-day strike notice at her discretion. Though Illinois teachers, unlike those in many states, have the legal right to strike, under last year’s anti-teacher law they have to notify the school board 10 days ahead of going out. Ninety percent of teachers—and 98 percent of those voting—voted to authorize a strike in June.

CTU Financial Secretary Kristine Mayle says the union still hopes to avoid a strike, but is prepared to walk if necessary.

“Of course our teachers want to be in the classroom with our students, but we realize this is a bigger fight for the good of public education,” Mayle said. “The future of public education in Chicago will be threatened if we don’t take action now. “

The union’s top priority is a “better school day” for all of Chicago’s students, one that would include art, music, gym, recess, and foreign languages. CTU wants smaller class sizes and wraparound services like social workers, counselors, and school nurses to make sure that the district’s mostly poor students get the support they need.

The district, on the other hand, has been slashing services for years and cites a $665 million anticipated budget deficit for next year. Many schools lack basic playground or gym equipment and 160 are without libraries.

“How dare they tell us that poor kids aren’t worth the investment?” said middle school teacher Kimberly Bowsky. “I’m not going to stand for it. And if I have to get knocked down for it, that would be regrettable. But at this point what choice do I or anyone else have?”

The union is demanding adequate staffing levels for the teachers, paraprofessionals, social workers, school nurses, counselors, psychologists, and librarians it represents, clear job descriptions, and protected preparation and break time. Though not a mandatory subject of bargaining, CTU is pushing hard for smaller class sizes and the ability to enforce them.

Also priorities for the union are recall rights for teachers displaced by school closures, fair compensation—no merit pay—and reducing the reliance on standardized tests for teacher evaluations. A new evaluation scheme would base half of a teacher’s grade on student scores.

Bowsky said, “My contract can deal with things children need. I don’t believe in this garbage they keep saying about us only thinking about ourselves.”

LONGER BUT NOT BETTER

Stuck negotiations had appeared to be moving again after the union and the board reached an interim agreement on a longer school day earlier this month. Under the agreement, the school day was lengthened, but teacher work hours remained the same. Prep periods were moved from the beginning or end of the day to the middle and 500 new positions were created to staff the extra time. Principals made decisions on what subjects those in new positions would teach at their schools.

The new schedule was in effect when 240 schools on a special “Track E” schedule started up in mid-August. The rest of the district’s more than 600 schools will open their doors to students on September 4.

Teachers say they’re being forced to take on other duties during their prep periods in violation of the agreement. Schedules for those in new positions have been in constant flux since the Track E schools started two weeks ago.

Aides report supervising up to 96 kids each during newly implemented recesses.

Teachers not yet back at work spent last week honing their strike skills with informational picketing at the Track E schools. Carrying signs proclaiming they are “fighting for the schools Chicago’s students deserve,” staff and supporters spoke to parents and passersby about the issues at stake.

The response was supportive. Officers in a police truck honked their horn and blew their whistles to show solidarity with the picket at Ruggles Elementary. Drivers on their way past Azuela Elementary reached out of their cars to grab solidarity stickers from teachers holding signs on the street corner.

When protestors at Arnold Mireles Academy decided to march down the neighborhood’s main strip, they were met with people darting out of stores to grab literature.

Veronica McDaniel, a middle school librarian, was glad for the chance to connect with community members and dispel media rumors.

She asked parents she met on the picket line to “tell me what your kids have in their schools. We’re trying to get decent programs in all our schools.”

The union held picket captain trainings over the weekend and as the rest of teachers and staff go back to work, strike meetings are being organized at each school.

The city is clearly taking the strike threat seriously. As dozens of teachers and allies rallied outside next to a giant inflatable rat on loan from the Teamsters, the school board voted to spend $25 million on alternate arrangements for students in the event of a strike. The money would be spent on hiring organizations like local YMCAs to provide food, shelter, and “non-instructional services.”

Teachers who’ve seen their schools denied resources for years were outraged that the district could find the money for its strike plan so easily. “That’s a lot of money,” fumed elementary teacher Al Ramirez. “Tell me it couldn’t be used for something else a lot better.”

Last week the district asked principals to report any union activity they found disruptive as “harassment/threat-type activity” on the district’s electronic reporting system.

Meanwhile, “Mayor 1%” Rahm Emanuel, architect of the longer school day and proponent of school privatization, has started to take a more active role.

The Chicago Sun Times reports that Emanuel seeks to facilitate a “second level of negotiations with more senior people” this week. This second tier would likely include Beth Swanson, Emanuel’s deputy chief of staff for education, and Randi Weingarten, president of the American Federation of Teachers.

Weingarten has praised CTU’s “incredible school-by-school organizing.” The union passed a resolution at its July convention promising full support for Chicago and other locals in a “hostile bargaining environment.”

But critics inside the union have decried Weingarten’s willingness to tout deals in Cleveland, Philadelphia, and New Haven, Connecticut, as models of collaboration when AFT locals have accepted contracts that hand power to privately run charters, undermine job protections, and allow for layoffs based on teacher evaluations drawing from standardized test scores.

The CTU should be ashamed of themselves. All the provisions they are debating about are wholly for the benifit of the teachers not the children. Since when do employees dictate how they are to be evaluated, number of hours they need to put in to retain their salary, and cry when their pay increase is twice the rate of cost of living? Shame, Shame, Shame

Chicago Teachers Say They'll Strike for the Kids Chicago teachers starting back to work this week might not want to get too comfortable in their classrooms. After weeks of stalled negotiations with the school board, the Chicago Teachers Union is inching ever closer to a strike. On Wednesday the union’s House of Delegates authorized President Karen Lewis to give the board a 10-day strike notice at her discretion. Though Illinois teachers, unli...