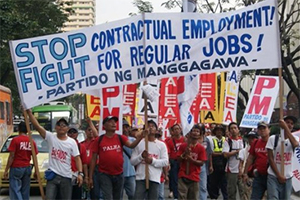 Days before their scheduled layoffs last fall, Philippine Airlines workers staged a sit-down strike, launched a picket, and set up camp near Manila’s airport in a desperate bid to stop Philippine Airlines from outsourcing their union out of existence.

Now 11 months into the protest, hundreds of displaced airline workers and their families are still holding the picket line and planning their next move, a decision made more difficult by cataclysmic flooding in the Philippines, which has killed almost 100 people since July.

If the airline gets away with its legally sanctioned union-busting, it could embolden a slew of copycat employers in the Philippines and in the airline industry worldwide.

The members of the Philippine Airline Employees Association turned to direct action after a fruitless legal campaign against the company’s outsourcing scheme. The airline had received approval from the Department of Labor and Employment to lay off 2,600 PALEA members in its catering crew, ground crew, and reservations operations and “spin off” the work to contractors, who would then rehire the laid-off workers at drastically reduced pay and benefits, and with no recognized union.

Philippine Airlines is headed by CEO Lucio Tan, one of the wealthiest businessmen in the Philippines, who was a crony of former dictator Ferdinand Marcos.

The airline’s management has used its own fluctuating finances and the instability of the wider economy to justify putting the squeeze on employees for more than a decade. The company laid off thousands of workers during the Asian financial crisis in the late 1990s, and PALEA agreed to suspend its collective bargaining agreement in 1998. For 10 years, the workers sacrificed to help the airline regain its financial footing.

The company exited receivership and announced profits of $72.5 million in 2007, but made no move to renegotiate the suspended contract. Unfortunately, neither did the union’s leaders.

PALEA sought legal relief through the courts and government agencies, but all of these eventually sided with management. The airline cited recession-related losses in 2008 and 2009 to justify the outsourcing, even though its financial picture was improving again by 2011.

The union filed a strike notice, but because air travel is considered an “industry of national interest,” its bid was voided by the Labor Department.

The agency found that the airline’s offer to laid-off employees—a severance package and a guarantee of one year’s employment with the new contractor—was a satisfactory arrangement.

No Choice but Action

With no legal options left, days away from the layoffs, PALEA staged dramatic protest actions on the job last September. The protesters, refusing to work, were physically removed from the Manila airport and other workplaces. Many PALEA members are now facing criminal charges, among them disrupting airport operations and grave threats and coercion, for their participation in the protest.

In order to keep up pressure, the union set up two camps for picketers near the entrances to the international airports of Manila and Cebu, the two biggest metropolises. They have faced two violent attempts to disperse the camp in Manila, but have stayed put.

The recent torrential rains, extreme wind, and flooding in the Philippines did not spare PALEA protestors, destroying their encampment near the Manila airport. Nevertheless, allies in the Philippine labor movement have pitched in to successfully rebuild the camp.

Union leaders have called for consumers to boycott the airline, and say the company has lost nearly one-third of its business since the protest began. PALEA is building an international day of action for airline workers on September 27 in collaboration with unions in Australia. They are seeking support from unions all over the world.

The union is also attempting to pressure the government with the support of key constituencies such as the Catholic Church. The auxiliary bishop of Manila has repeatedly celebrated masses at the picket line and pushed for the formation of a church-labor conference to press for the workers’ demands.

However, time has taken a toll on PALEA’s numbers. About half of the “Paleans” have had to reluctantly accept the company’s severance terms and seek work with the new contractors or in other industries. Some 1,200 workers continue to protest.

Feeding the picketers and their families costs PALEA about $500 a day, and the protest camp is endangered by lack of funds.

“Within the labor movement, PALEA’s fight is seen as a trailblazer struggle,” said one Philippine union leader. “If it loses, then the floodgates for outsourcing work and busting unions will be wide open.”

Ed Mattos is an Ironworker and volunteer with the International Labor Rights Forum. Donations to PALEA can be made here.