Walmart Workers March in L.A., Saying ‘No Thanks’ to New Stores 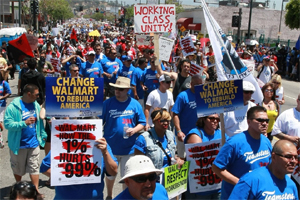 More than 4,000 union members and community supporters, including many Walmart workers, marched in Los Angeles Saturday. They opposed the chain's bid to bring its tornado of destruction into urban centers. Photo: Slobodan Dimitrov.

More than 4,000 union members and community supporters, including many Walmart workers, marched in Los Angeles Saturday. They opposed the chain's bid to bring its tornado of destruction into urban centers.

The march was led by 100 current and former Walmart workers, members of Organized United for Respect at Walmart (OUR Walmart), who carried the lead banner: “Walmart = Poverty.”

Amanda Greiner, a Walmart worker for seven years in northern California and now a full-time organizer for OUR Walmart, told Labor Notes that Walmart workers are fed up with poverty wages, lack of benefits, part-time hours, and disrespect from management.

Most of Walmart’s workers “are on welfare,” she said, and work “such low part-time hours that we can’t qualify for health insurance.”

Walmart’s pitch to the public is that it has the lowest prices anywhere, offers “competitive” pay, and aids local communities.

Greiner disagrees, pointing to an independent study saying the average wage is $8.81 an hour—not the $12.66 the company claims.

Girshriela Green, who works at the Baldwin Hills Grenshaw Plaza Walmart in L.A.’s Black community, told the LA Wave, “I’m a manager in one of their biggest consumable departments. I make $9.80 and have to depend on county health care and food stamps to make ends meet.

“I’m neglected on a daily basis, but that’s not just my story, that’s the story of Walmart workers nationwide,” Green said. “When I complain to managers they just say there’s a hundred people waiting in line for my job.”

Walmart is the largest private U.S. employer with 1.4 million workers. The OUR Walmart group is the latest initiative to improve conditions at Walmart, following years of effort by unions to organize at the retail giant. Backed by the Food and Commercial Workers, OUR Walmart has organized groups of hourly workers in several dozen stores, and has led marches to company headquarters demanding respect, affordable health care, stable and fair scheduling, and $13 an hour.

Maria Elena Durazo, head of the Los Angeles County Federation of Labor, told the crowd before the march, “If Walmart doesn’t do right in our communities, we don’t want you in our communities.” Thousands held signs that read “Walmart: How the 1% Hurts the 99%.”

The protestors opposed locating one of the chain stores in the historic Chinatown district. They marched past Chinese stores, restaurants, and shops, many displaying signs with anti-Walmart messages. Their mom and pop owners stood in front of the stores waving to the crowd.

Scores of union contingents lined up behind the Walmart workers. A sea of union banners billowed in a soft breeze. Among the largest contingents were the Food and Commercial Workers, UNITE HERE, Teamsters, and the Service Employees, along with Teachers, Longshore and Warehouse workers, Steelworkers, and Auto Workers.

The marchers were preceded by Chinese lion dancers and 75 motorcyclists wearing Teamsters jackets.

At a rally in Chinatown, King Cheung, a member of the Chinatown Committee for Equitable Development, told the crowd, “We believe small businesses will be hurt. Some will close and there will be layoffs.”

Walmart has left much damage in its wake. When the company established 60 stores across Iowa, it resulted in the closing of 555 grocery stores, 298 hardware stores, 293 building supply stores, 161 variety shops, 158 women’s stores, and 116 pharmacies, according to a University of Iowa study. The wreckage included the loss of thousands of jobs.

In Chicago, Walmart’s aggressive expansion in recent years has produced no increase in jobs or sales, according to a University of Illinois study. Walmart split the local labor community in Chicago, gaining the backing of the building trades by agreeing to use union labor to construct its stores. The company is attempting to use the same tactic in New York, one of the few major urban centers without a Walmart within its borders.

The company has big plans for big cities, because it has saturated suburban and rural areas and needs urban shoppers in order to satisfy investor demands for endless growth.

A Big Box on Every Block

Walmart has plans to build another two stores in L.A. in addition to the one slated for Chinatown. The Los Angeles City Council passed an ordinance recently prohibiting Walmart from opening new stores in the city (it operates five already), but the company had secured a building permit one day before. Meetings have taken place in the other targeted communities to stop Walmart.

If Walmart builds stores in the Los Angeles area at the density rate it desires, there would be 212 Walmart stores across the county, according to the Los Angeles Alliance for a New Economy, a research-and-action group that sponsored Saturday's protest. LAANE calculates that 8,744 retail jobs would be lost, 9,400 poverty-level workers would apply for public medical benefits, and $621 million would be lost in wages each year.

The campaign to halt Walmart is spreading the word that the company isn’t just another big retail store simply selling products to the public. It is owned by the ultra-conservative billionaire Walton family, which has poured millions of dollars into the coffers of right-wing organizations, from conservative politicians to anti-union groups to privatizing charter school organizations.

Walmart has become so powerful it dictates prices to its suppliers and competitors, which sends pay and work conditions tumbling throughout the economy. A June investigation by a workers’ rights group revealed one of its seafood suppliers in Louisiana had guest workers on the job 15 to 24 hours a day, paying less than minimum wage. The report said “the totality of the abuses taking place at this employer constitute forced labor under U.S. law.”

Protests are planned in major cities this week to mark Walmart’s 50th anniversary, pointing out the destruction the company has wrought.