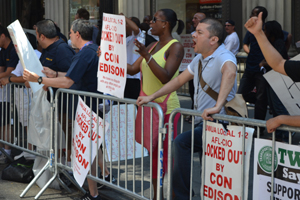 New York City's utility company locked out 8,500 workers during a summer heat wave in a bid to attack pensions and health care. Members marched, chanted, and cheered on pickets as the union questioned replacements' safety training.

Picket lines around New York City were dotted with umbrellas as utility workers sought shade from 97-degree temperatures as they marched, chanted, and cheered into their second week of a lockout.

Con Edison, the company that provides electricity for the city, locked workers out July 1 in an attempt to force Utility Workers Local 1-2 to convert the pension plan into a 401k that members say will pay out less when they retire.

Con Edison said it had evicted 8,500 union utility workers from their jobs as a preemptive move, to head off a strike that would disrupt service to customers. The union said members would not agree to limit their right to strike as negotiations stalled. Con Edison dispatched 5,000 managerial employees to take their jobs.

Local 1-2 is emphasizing that locked-out utility workers are highly skilled and trained to ensure safety and quality service. They said Con Edison is risking replacement workers’ safety to pursue a destructive agenda. Already two managers have been sent to the hospital after injuries on the job, including one who received burns to his face.

The union questioned the training that replacement workers receive, noting that some are coming straight from desk jobs. A representative for the local said that burn injuries indicate that basic safety precautions aren’t being followed.

Reports of sporadic local service interruptions continued through last week, and the company has halted most meter reading and construction projects. The AFL-CIO state federation is asking consumers to tell New York’s public utility commission to investigate unsafe conditions for the replacement workers and pressuring politicians to weigh on the workers’ behalf.

UWUA members on the picket lines described surprise and dismay that their employer would shut them out during a blistering heat wave, when demand for electricity is highest and company resources are strained.

“It’s a slap in the face,” said Frank Rodriguez, a steward and 36-year senior technician, on the line at Con Ed’s Manhattan headquarters.

Workers are eligible for unemployment benefits and even food stamps, but Con Ed cut off their health insurance. Some complained their last week of pay has been withheld.

The union was in negotiations Friday with management and mediators, but officials reported no progress.

As younger members with fewer than 10 years on the job, customer service reps Monica Figueroa and Latonya Lamert are upset with the hard line on concessions. They were attracted to working at the utility because of the benefits, particularly the pension.

“There’s no sense of mediation,” Lamert said. “We take care of the city well. They didn’t give it back to us.”

Labor attorney Bob Schwartz argues that a lockout can be better for a union’s bargaining position than a strike, because members can collect unemployment benefits, gain the public’s sympathy by pointing out that the employer is refusing to let them work, and wield the threat of huge back-pay awards if the employer is found to have committed unfair labor practices during the lockout.

The union is pursuing ULPs, while the company is seeking an injunction to limit picketing.

In recent lockouts, many unions have had to accept serious concessions to get members back to work. UWUA Local 1-2 members are well aware of the brutal contract fights that have taken place around the country. Activists are trying to keep spirits up and keep their fellow members on the picket lines in sweltering July heat. Their popular “Burke is a jerk” chant rings through the streets.

The union estimated that more than 4,000 people came to the central picket last Thursday, led by supporters from other unions, including teachers, postal workers, transit workers, and communication workers.

“You couldn’t walk,” said Monica Figueroa, about the crowd at Con Ed headquarters. Her co-worker agreed. “It’s a good feeling,” said Lamert: “We’re not out here by ourselves.”