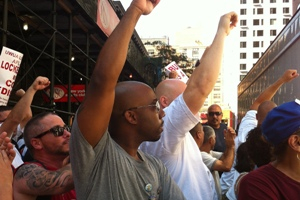 Members of Utility Workers Local 1-2 were locked out in June. Pressure from state politicians has put them back on the job, but the company has agreed to nothing new. Photo: Diane Krauthamer.

Against a backdrop of looming summer storms, locked out utility workers are returning to work after a four-week standoff with Consolidated Edison, New York City’s electricity provider, after state politicians stepped into the high-profile dispute.

Governor Andrew Cuomo brokered a meeting between the two sides this morning after sending a letter to the public utility commission asking it to convene talks between the union and the company yesterday. Within hours of Cuomo’s letter the commission announced talks, reversing its earlier position that federal law prevented it from intervening.

According to the union, half of the 8,500 locked out workers will return to work immediately.

For weeks the union has been calling on the governor to take action, and union spokesman John Melia bristled at the governor’s public statements pointing the finger at the union as well as the company. “To hold us accountable when Con Ed locked us out? Is the governor serving Con Ed and the board of directors or is he serving all of the people of New York?” Melia said.

It is not clear what effect the stepped up political pressure, or the return to work, will have on negotiations. The company has continued to push Utility Workers Local 1-2 to convert its traditional pension to a 401(k) and for workers to pay substantially more for health insurance.

The governor’s intervention was only part of the pressure from Albany. Yesterday the New York State Assembly held hearings on Con Edison’s safety plans following the company’s decision to lock out front-line technicians and call center workers.

In the hearings, Con Edison Vice President John Miksad defended the company’s safety record during the lockout. “This is the safest Con Edison has ever been,” he said.

Local 1-2 president Harry Farrell disagreed. “The scabs the company is bringing in from around the country don’t know how to work on our system,” he said. Twelve managers have been seriously injured during the lockout, including one sent to the hospital with burns to his face.

Con Edison has hired over 700 contractors to work alongside 2,500 supervisors in the field.

Farrell warned the Assembly members that inexperienced replacement workers could leave behind potentially deadly conditions for city residents and Local 1-2 members. “They’re going to be in here and gone. We’re going to be walking into potential bombs,” he said.

In yesterday’s hearings Miksad denied the company was planning for a lockout, although he acknowledged Con Edison put a contingency plan in place a year ago in preparation for the July 1 contract expiration.

Con Edison is following a trend by locking workers out to gain the upper hand in negotiations.

The past two years have seen an explosion in lockouts, from high-profile disputes between professional basketball and football players and team owners, to less-publicized standoffs such as the 14-month lockout at Honeywell’s Metropolis, Illinois, nuclear processing plant and the ongoing conflict between sugar beet workers in Minnesota, Iowa, and North Dakota and their employer American Crystal Sugar.

In the last two decades lockouts have comprised about 5 percent of all work stoppages, according to the news organization Bloomberg BNA. That figure doubled to almost 10 percent between 2010 and 2011.

For first-hand accounts of the impact of the Con Edison lockout, watch this recent report from Jaisal Noor and The Real News Network, posted below.

They realld maintain it at the hard way.