What Happened to All the Weatherization Jobs? 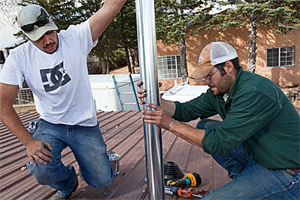 Weatherization looked like a triple win: create jobs, save money and energy, and slow global warming. But judging by the experience in Massachusetts, raising wages and standards for existing weatherization workers may be a better goal than trying to create new jobs. Photo: Jim West.

“A hundred million US homes need to be weatherized.” “Tens of thousands of jobs in home weatherization.” In 2009 weatherization was all the buzz. It looked like a triple win: create jobs, save money and energy, and slow global warming. The Obama administration made home weatherization a high priority for stimulus money and the Laborers union set up a program to train new workers to weatherize up to a million homes a year.

Three years later, some of those jobs have materialized. The U.S. Department of Energy reported last September that stimulus funds had weatherized half a million low-income homes and employed 14,000 workers for some period of time. But judging by the experience in Massachusetts, raising wages and standards for existing weatherization workers may be a better goal than trying to create new jobs.

Like residential construction, its parent industry, weatherization is a low-wage field. It doesn’t take years of experience to seal drafty leaks around windows or blow cellulose insulation into walls. In Massachusetts, weatherization workers are largely immigrant and the typical contractor has one truck and one crew.

The utilities that run Massachusetts’s weatherization program keep the prices and profit margins low, which squeezes larger contractors out of the field.

But despite the low wages and profit margins, home weatherization is still too expensive for most working class families in Massachusetts. In 2010 the Green Justice Coalition—construction unions, neighborhood organizations, and environmental groups in working class communities like New Bedford, Springfield, and neighborhoods of Boston—launched a pilot project to make weatherization affordable and create good jobs.

The community groups knocked on doors and signed families up to insulate their homes. Federal stimulus money and utility ratepayer funds made the work free for low- to moderate-income families. The Laborers, Painters, and Carpenters trained residents as weatherization apprentices with basic safety training and lead paint certification. The Laborers chartered a weatherization workers local, in New Jersey.

And then the apprentices waited, says Jovanna Garcia Soto, Green Space coordinator for the Chelsea Collaborative. The collaborative is a largely immigrant community organization in Chelsea, a working class city just north of Boston.

“It took a long time till the first house was ready to move,” says Garcia Soto. “Many houses needed basic repairs and many families couldn’t afford that. The middle of the recession was the hardest time to start this program. My people needed a job. They’d done the training and the test, they’d done everything right, but there were a lot of dropouts because they needed jobs.”

Just three people from Chelsea got jobs when the first house was ready to start, Garcia Soto said. Those who didn't get hired didn't become union members.

“Another problem was the [wage] package we created was too high for the small contractor we’re working with,” she said. The contractor said if he didn’t have to pay Davis-Bacon wages, the prevailing wage level in the area as determined by the federal government, he could hire more people—and at least one at full-time.

“We came across some abuse of the workers in the weatherization market,” he said. “In one company we followed, the workers picked up their truck, loaded all the tools, loaded the materials, drove to the job and weren’t paid for any of that time. They were working a 12-hour day and paid for eight. We ran into a number of those—workers cheated out of overtime or paid fewer hours than they worked.”

The Green Justice Coalition decided to focus on creating good jobs and improving existing weatherization jobs in Massachusetts. By working and mobilizing together, unions and community groups carved out a place in the state’s weatherization industry.

Weatherization workers in Massachusetts saw their wages rise between 25 percent and 95 percent. The coalition’s agreements put a floor under wages and standards that opened up the home weatherization industry to unions, and union contractors are getting an increasing share of the work. The prime vendor monitors and enforces the agreement.

Although the Chelsea Collaborative's worker center isn't focusing on weatherization now, with the pilot program over, the work is still paying off. The Carpenters union and the collaborative have built a solid relationship that benefits both sides.

“It wouldn’t have happened without an actual campaign,” says Mark Erlich, the New England Carpenters’ executive secretary-treasurer. “We wouldn’t have donated labor for the new Chelsea Collaborative office without the Green Justice Coalition. And when my business agent needs support on a non-union hotel being built in Chelsea, he goes to the collaborative” for political and community backing to pressure the hotel to hire union construction workers.

Partnering with the Carpenters has changed Garcia Soto’s perspective as an organizer. “I got very interested in jobs,” she says. “We have a worker center that we struggle to keep open because it’s hard to find work for immigrants and people without papers. But unions are working for the same justice-at-work goals, and the union’s members are fighting home foreclosures.

“We should work very hard every day to create one labor movement. It’s not union on one side and community on the other side.”

Mike Prokosch works for Community Labor United in Boston. For more on the weatherization program, see this report.