As Unions Cheer Health Care Decision, Some Push for More 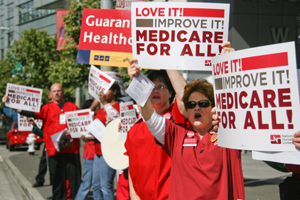 After the Supreme Court upheld the Affordable Care Act, much of labor issued a glowing reaction. But some unions said unhealthy provisions are hiding in the bill—and the court's decision. Photo: CNA.

It's Supremely official: Congress can force us to pay private corporations to deliver a fundamental human right, health care.

With the Affordable Care Act intact, we will get to see how the law actually pans out—because no one really knows what to expect when the law begins in earnest in 2014.

In the meantime the Supreme Court's decision lets stand the individual mandate, which those of us from Massachusetts have been working with (or around) for the last three years. The mandate has put more people into private health insurance but it hasn't slowed the steady rise in premiums and high deductible plans which continue to put workers further and further into economic uncertainty and poverty.

After the Supreme Court upheld the Affordable Care Act yesterday, much of labor issued a glowing reaction. But some unions said unhealthy provisions are hiding in the bill—and the court's decision.

“From a political campaign perspective it’s a good outcome,” said Mark Dudzic, national coordinator of Labor for Single Payer. If the Supreme Court had thrown the law out, “Obama would have been discredited and the narrative would have been, 'he should have been spending his time thinking about jobs and wasted two years doing this unconstitutional health care thing.'”

Still, Dudzic pointed out that the law doesn’t relieve a pressure that all unions face.

“Once the triumphalism fades, people are going to have to get down to the hard realities that the labor movement is facing a huge bargaining crisis on health care,” Dudzic said.

STILL NEED MEDICARE FOR ALL

The AFL-CIO’s President Rich Trumka cheered the decision, saying it’s time to move “full speed ahead” to put it into practice.

There are several good elements to the law. Insurance plans must cover dependents to 26 years of age. Insurers can’t exclude coverage to people with pre-existing conditions and millions more people who cannot afford health insurance will receive it. Lifetime limits on coverage will be eliminated. Employers of less than 50 employees will continue to get a 35 percent tax credit if they pay at least 50 percent of an employee's premium.

In 2014, state-based exchanges of private health insurers will be put into place. No one really knows what this will look like as it is designed so that the insurance market will shape it. Most likely, it will resemble a dollar sign more than anything else.

But Trumka also said the new law is just “the first step,” adding that “a simple, indisputably constitutional solution is to allow Americans of all ages to buy into an improved Medicare program.”

The National Nurses United, longtime backers of Medicare for all, vowed to push for that solution. NNU Co-President Jean Ross said the union will accelerate its campaign for a “universal program based on patient need, not on profits or ability to pay.”

Other unions pointed out that while constitutional, the Affordable Care Act still has plenty of shortcomings.

“While some of the ACA’s provisions would apply a temporary band-aid,” said Bill Cruice, director of the NNU affiliate Pennsylvania Association of Staff Nurses and Allied Professionals, “the fundamental problem in our health care is the dominance by a small handful of insurance and pharmaceutical conglomerates and profit-driven hospitals.”

Cruice said the private system “squanders billions of dollars on wasteful overhead and collections,” and prioritizes “exorbitant profits and executive compensation above all while ordinary Americans struggle to get the care they deserve.”

One important plank of the Affordable Care Act was weakened by the court. The law encourages states in 2014 to expand their Medicaid rolls by increasing the income eligibility to 133 percent of poverty level, and offers federal money to pay 90 percent of the cost for the new enrollees. That expansion would provide health care access for millions of low-wage workers and their families.

But the court allowed states to refuse the Medicaid expansion without penalty. Some analysts are predicting that Republican governors in states like Texas, Mississippi, and Florida might refuse it.

The conservative Supremes also denied that the law could be based on the Constitution’s commerce clause, which has been the legal anchor for social programs and important regulations since the New Deal. Along with civil rights and environmental protections, labor rights are embedded in the commerce clause. Weakening that foundation could prove to be a long-term loss for those of us seeking to constrain corporate power.

Other land mines are still waiting to be unearthed. Those who have OK health insurance will be anxiously looking toward 2018. That’s when plans costing more than $27,000 a year will have to pay a tax on every dollar over that amount. Already many family plans in the Northeast exceed that figure.

It is no secret how the industry and their corporate partners are going to try to pay the tax: by reaching into our pockets, just like they do for everything else.

And for working people who make not much more than the poverty level, the health care landscape continues to be a barren wasteland, with private sector health insurance companies and their shills in Congress and state legislatures controlling the spigot.

The members in my union, the United Electrical Workers, continue to face attempts by employers to make us pay for more and more of our health care, from California to Connecticut.

Like most union organizers, I have spent most of my adult life having to listen to executives and their lawyers say a decent standard of living was a drag on the success of the business.

Then, when we start negotiating over health insurance, I am constantly awestruck by their total support of an industry which wastes billions more in resources than it provides in jobs and continues to be the single biggest drag on our economy and the company's ability to provide for the workers.

Just these past two weeks alone I have been involved in negotiations where three different public employers in Connecticut and Massachusetts are proposing that our members either convert to high-deductible Health Savings Accounts or that new employees pay upwards of 50 percent of the insurance premium.

In one case the 50 percent contribution is demanded of food service workers who make $12 an hour, work 30-hour weeks (or less), and don't work during the summer. The school is trying to make people pay this ungodly sum because their cafeterias aren't “making money.” Want to guess why they aren't making money? The increasing costs of health care are overwhelming their budget. (Bet that sounds familiar!)

Working people will continue to face outrageous health care costs and demands that we pay more and more so the industry can make more and more. In less than 10 years the premium cost of a family plan will exceed most workers' wages. Count on it.

There might be a silver lining. The Supremes’ decision allows states like Vermont and Oregon to proceed with their plans to enact truly universal health care for their residents.

Thanks to organizations like the Vermont Workers Center and their allies, Vermont legislators passed a bill last year that will create a public fund that pays all health care bills, rather than relying on a tangle of private insurers looking to boost their bottom lines. Businesses would pay into the common fund, and health care in Vermont would no longer be tied to employment. That’s a foundation we can build on.

Peter Knowlton is president of the Northeast region of the United Electrical Workers.

Related
Steward's Corner: How One Union Uses Kitchen Table Economics to Advance Medicare for All »
Striking ATI Steelworkers Hold the Line for Premium-Free Health Insurance »
New York City Retirees Fight to Defend Their Medicare Benefits »
On Medicare for All: Fight for What We Want, Not What We Think We Can Get »
Racial Disparities in COVID-19 Point to Need for Medicare for All »

Obama's health care scam is an insurance company, HMO, Big Pharma sponsored measure that increases their profits and places new taxes on workers. Like everything coming from the White House and Congers dealing with the needs of working people vs. the greed of the rich it has, like the stench of corruption attached to it.

Obama got 20 million in bribes to scuttle the public option. "While some sunlight has been shed on the hefty sums shoveled into congressional campaign coffers in an effort to influence the Democrats' massive healthcare bill, little attention has been focused on the far larger sums received by President Barack Obama while he was a candidate in 2008. A new figure, based on an exclusive analysis created for Raw Story by the Center for Responsive Politics, shows that President Obama received a staggering $20,175,303.00 from the healthcare industry during the 2008 election cycle, nearly three times the amount of his presidential rival John McCain. McCain took in $7,758,289, the Center found." Common Dreams 01 12 2010

In this Washington Post article you can see the vast amounts given in bribes by the health industry and compare it to the vote in Congress which cut the public option and never even considered socialized medicine, the real and only answer to the US health care crisis. http://www.washingtonpost.com/...

Obama had to work hard for his bribes. "White House declines to disclose visits by health industry executives… Citing an argument used by the Bush administration, the Secret Service rejects a request from a watchdog group to list those who have visited the White House to discuss the healthcare overhaul. WASHINGTON — Invoking an argument used by President George W. Bush, the Obama administration has turned down a request from a watchdog group for a list of health industry executives who have visited the White House to discuss the massive healthcare overhaul. Citizens for Responsibility and Ethics in Washington sent a letter to the Secret Service asking about visits from 18 executives representing health insurers, drug makers, doctors and other players in the debate. The group wants the material in order to gauge the influence of those executives in crafting a new healthcare policy." LA Times 07 22 2009

I think that it’s a very good idea for Democrats to continue to applaud Obamacare. It's works to distance them from working people.