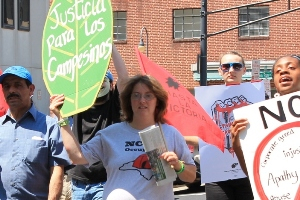 Tobacco workers and supporters marched outside the shareholders meeting of Reynolds American in Winston-Salem, North Carolina in early May. Forty-five attended the meeting to ask questions and report on dangerous conditions in the fields. Photo: Janie Lakeman.

The perseverance of Farm Labor Organizing Committee activists in North Carolina paid off in early April when Reynolds American finally agreed to meet with the union. FLOC has been demanding since 2008 that the tobacco giant discuss working conditions for tobacco pickers.

The Ohio-based union, which has organized pickers in the tomato and cucumber fields, says 30,000 North Carolina tobacco workers suffer from sub-minimum wages; green tobacco sickness caused by high doses of nicotine absorbed through the skin due to lack of adequate protective gear; squalid living conditions; and insufficient drinking water, increasing the risk of heat stroke.

The long-awaited dialogue will take place under an “Industry Council” with representatives from the North Carolina Growers Association; Altria Group, the parent company of Phillip Morris USA; Reynolds American; and FLOC. The union already holds a contract for 6,000 agricultural workers with the growers association.

On FLOC’s agenda will be health and safety, a grievance process, fixing deplorable housing conditions, and the right for tobacco pickers to organize without fear of retaliation.

“We’re definitely in a new stage of the campaign—our supporters are feeling the impact of their hard work,” said FLOC’s Beatrice Maya.

Even with the promise of talks in hand, FLOC activists pressed ahead with their annual trip to the Reynolds shareholders meeting May 3 in Winston-Salem, North Carolina. The announcement of Reynolds’ new-found openness was delivered by FLOC President Baldemar Velasquez to hundreds of supporters clad in FLOC red as they rallied outside the meeting.

Since 2008 FLOC members and community, faith, and labor allies have been making the pilgrimage to confront company shareholders. Besides working conditions and the right to organize, FLOC also planned to raise Reynolds’ ties to the American Legislative Exchange Council. ALEC drafts and promotes anti-worker and anti-immigrant legislation such as recent laws passed in Alabama and Georgia.

A report the union released last September with the human rights group Oxfam revealed that nine of 10 of the state’s tobacco workers are undocumented and that their organizing is stymied by fear in the immigrant-hostile South.

But still they press on. Forty-five FLOC supporters and members were present in the meeting and able to ask questions and raise points of information.

“When we walked into the meeting this year, the chair was almost friendly towards us and the members, a greeting we have never received before,” Maya said. “The first thing on the agenda was the announcement of Reynolds’ intention to finally open a dialogue with North Carolina tobacco pickers.”

Besides the Industry Council, Reynolds also said it would meet one on one with FLOC organizers.

Although no one can say for certain why Reynolds had a sudden change of attitude, it is clear that the farmworkers were not easy to ignore.

Working with the Beloved Community Center in Greensboro, North Carolina, FLOC began targeting Kangaroo, the largest convenience store chain in the Southeast and a major distributer of Reynolds tobacco.

BCC activists dropped petitions and distributed leaflets at more than 100 Kangaroo locations, asking the company to demand that its largest tobacco supplier, McLane Co., urge Reynolds to talk with FLOC.

BCC allies also targeted 18 of McLane’s distribution centers, where letters were delivered to the CEO urging him to pressure Reynolds to meet with FLOC. The union says both McLane and Kangaroo reported they did contact Reynolds and encourage a meeting.

Maya says pressure on Reynolds was applied from all angles and across borders: “We had union allies like United Food and Commercial Workers in Canada, Steelworkers in Vancouver, disrupting business as usual for individual Reynolds board members in other business ventures of theirs.”

Although FLOC activists know that talk alone will not address the issues that tobacco pickers are facing, organizers described the mood at the end of the shareholders meeting as high-energy, hopeful, and with a definite feeling of tangible power resulting from five years of intense action and community organizing.