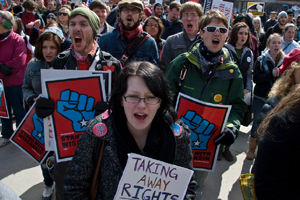 University of Wisconsin students rallied on the Milwaukee campus against higher ed cuts. Now UW administrators are pressing for new policies that will shift universities toward a dog-eat-dog philosophy. Photo: Sue Ruggles.

Wisconsin’s historic recall election has taken center stage in the state’s politics. Yet behind the recall curtain, the state struggles to manage damaging budget cuts enacted by Governor Scott Walker.

One key issue is the state-mandated redesign of the University of Wisconsin’s human resources system. This plan threatens how the university instructs its students, supports its faculty, and protects the rights of its employees.

Responding to the growing culture of austerity, UW-Madison has turned toward “efficiency” measures to restructure university jobs in accordance with market-based ideas.

The shift contradicts the historical mission of the state’s university system, which is grounded in service to the public good, a philosophy coined “The Wisconsin Idea.” Established in the early 1900s by Wisconsin Governor Bob La Follette, the Wisconsin Idea espouses affordable and accessible education, research that meets the state’s social and industrial needs, and progressive reforms such as corporate taxation, protection of workers’ rights, and government regulation of finance.

But Wisconsin’s current leaders have new ideas for the state and its universities.

When Walker entered office in January 2011, the state had a budget surplus of more than $120 million. Walker made quick work of creating a budget crisis, allocating $140 million in corporate tax write-offs and giveaways during his first weeks in office.

Under cover of the manufactured budget deficit, Walker passed legislation that eliminated collective bargaining rights for public sector employees and cut the state’s social services drastically, including all levels of the education system and the state health care program.

Wisconsin’s 2011-2013 budget slashed $250 million in state funding for the university system and later added an extra $46 million in debt allocated specifically to UW-Madison.

In flagrant violation of the university’s shared-governance procedures, Martin developed a PR campaign dubbed “The New Badger Partnership,” designed to separate the Madison campus from the larger university system.

According to partnership supporters, the plan would increase UW Madison’s global competitiveness by offering more opportunities for faculty to secure private research dollars, rather than relying on state aid and its cumbersome red tape.

Critics, however, say such a plan would not only accelerate the decline in state aid to UW-Madison but also contradict key components of the Wisconsin Idea. The university would be beholden to private research funds, alumni donations, and tuition dollars. Tuition would skyrocket, making the university inaccessible to working class families. (Costs are already up: Walker’s predecessor, Democratic Governor Jim Doyle, boosted tuition and fees by 32.5 percent.)

Martin’s agenda (and both Doyle’s and Walkers’ cuts) fit into the national trend: Campus administrators respond to shrinking public funding by ratcheting up marketing campaigns in a bid to attract students they view as education customers in a competitive marketplace, ditching commitments to public or educational priorities.

The Few or the Many?

One less-understood effect of Walker’s attack on public workers is now coming into full view. He mandated a reorganization of the UW-Madison personnel system in July 2011, to be completed July 2013, and this year administrators proposed a plan that emphasizes “efficiency” and “flexibility.”

The proposed plan could reduce workers’ pay and vacation by moving to a “market-based model” for compensation. It recommends a “performance pay” model, enabling departments to incentivize “star” research faculty over others, rewarding those few who can afford to overwork, while increasing reliance on adjuncts, graduate students, and lab techs to execute the university’s teaching and mentorship missions.

If the plan goes through, employees will be paid according to an analysis of “labor market standards”—despite the fact that comparable market standards do not exist for certain positions. Determining these standards would require a fully staffed office to create and maintain market data for these positions.

Significantly, the plan explicitly rejected a living-wage model for employees, claiming that it would be impossible to implement across employee categories.

Faculty have criticized the plan for its ambiguous prioritization of “talented” employees, the lack of data or research in support of the recommendations, and the little attention it pays to the university’s educational responsibilities as a public institution.

Others are concerned with the lack of grievance procedures. The plan makes no mention of mechanisms to address workplace grievances such as discrimination or overwork. Nor does it refer to a model of shared governance, where employees participate in decision-making.

After Walker’s Act 10 restricted almost all items that public sector unions can legally negotiate over, like benefits and workplace regulations, employee-employer relations have essentially functioned under a de facto policy of good faith, with the assumption that tenets of prior contracts would be upheld. Unions have few ways to know how faithfully that policy has been adhered to.

While some unions did choose to recertify last fall and gained the “right” to bargain over wages (capped at inflation), there has been no written or explicit agreement established between the university and university workers that provides a clear mechanism for addressing the myriad issues that were formerly handled through negotiations.

Members of the Teaching Assistants’ Association (graduate employees) and AFSCME locals representing clerical and blue-collar workers have been working to educate members and the campus community about the potential impact of this policy shift. Members have been recruiting others to attend the campus-wide forums in order to express concern and resistance to aspects of the new system—though there is no explicit procedure stating how this feedback will be processed or incorporated.

This summer will be a critical moment in the decision-making process, as the HR team singlehandedly compiles the unofficial recommendations from the work teams and selectively creates a unified recommendation to submit to the Faculty Senate in fall 2012. The team has promised to seek input from the student government and other campus groups, but the way to challenge its recommendations is strikingly unclear given the concentrated power in its hands.

One of the largest concerns about the plan is the collapse of employee categories. While this recommendation is now under revision, it originally would have combined classified staff, such as administrative assistants, janitors, and trades workers, with academic staff, such as teachers, staff researchers, and lab managers. Academic staff do not have the right to collectively bargain, unlike classified staff. Though several unions of classified staff on campus opted not to re-certify due to Walker’s restrictions on bargaining rights, upon re-certification, they still possess the legal right to bargain.

Combining the groups would ensure that the largest class of employees would lose its right to collectively bargain. Based on the proposed compensation packages, academic and classified staff would likely lose varying amounts of vacation time and sick leave.

The University’s unions and students are beginning to speak up against Wisconsin’s new bad ideas: to hold the state’s largest educational institution accountable to market priorities, rather than educational needs. The Walker agenda has made clear that the public good should be diminished for the sake of the private.

Eleni Schirmer and Lenora Hanson are members of the Teaching Assistants’ Association at UW-Madison.

A version of this article appeared in Labor Notes #399, June 2012. Don't miss an issue, subscribe today.
Related
‘No Contract, No Matisse’: Philadelphia Museum of Art Workers Win First Contract After Strike »
After Strike Threat, Wisconsin Nurses Get a Possible Path to Union Recognition »
Wisconsin Nurses Set to Strike, As Employer Claims It's Banned from Bargaining »
Open Bargaining Brings the Power of Members to the Table in Berkeley »
Employers Are Using the Crisis to Push Concessions They Don't Need »

What is going on at UW is a Koch brothers master plan to take over all public universities and make them their factories supporting capitalism. Questioning what is going on is discouraged and ignored. The university system is starved of tax funding forcing tuition to go up and unaffordable for the public. The University will be made dependent on private donations with strings attached. The faculty will be hand picked by the contributors to promote conservatism, religious ideology, and obedience. Science will be discredited over profitability.

Research projects will be determined by the donors.

Fight back. There's a lot more information in the internet. I have been collecting it for a few years.

This is a good article on an important issue. However, there is an inaccuracy at the beginning. It is not true that Walker created the budget deficit at the beginning of 2011 by passing corporate tax breaks. The tax credits did not come into effect until the following fiscal year and so added to the 2011-13 deficit, but did not impact the 2009-11 budget.

There actually was a small budget shortfall when Walker entered office last year (details are here: http://www.politifact.com/wisconsin/statements/2011/feb/18/rachel-maddow...), but the crisis was still manufactured in the sense that the deficit could easily have been dealt with in other ways (most of it could have been rolled over to 2011-13, for example, and then dealt with by raising corporate taxes to the national average, instead of cutting them further), but instead was used as an excuse to ram through radical anti-union legislation.

Whoever wins the recall election on June 5, the consequences of that legislation will remain. Labor, campus and community activists need to be organizing now to oppose it.