The Troublemakers Union Gathers, Stronger than Ever 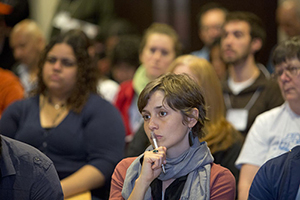 If there's one consensus opinion about the weekend's Labor Notes Conference, it's certainly that there's more than any one attendee could keep track of.

Or even a dozen. Sameerah Ahmad first came to a Labor Notes Conference as a student activist and was impressed to find a place where rank-and-file workers, union activists, and troublemakers of all stripes—from all over the world—had a home.

Now she's the director of the Cincinnati Interfaith Workers Center, and she brought 12 members along with her to Chicago for the May 4-6 Labor Notes gathering. But even with a dozen folks participating in workshops, she said they couldn't get to everything they wanted to at the 1,500-person conference.

"You can get depressed hearing all the stories of low-wage and immigrant workers," Ahmad said. But at Labor Notes, "the energy is amazing." Vision sharpens, and all of a sudden the movement that can stand up against the odds comes into view.

With over 150 workshops and meetings, the conference provided training geared toward activists at all levels of experience. They covered a full range of topics from nuts and bolts workshops like aggressive grievance handling, beating apathy, and bargaining table tactics to sessions with a broader scope, like organizing immigrant workers, using direct action, and organizing without collective bargaining rights..

Amalgamated Transit Union President Larry Hanley spoke to the plenary session Saturday morning. The ATU made a special effort to send members, especially from the Chicago local, and they were conspicuous in their orange “OCCUPY TRANSIT” T-shirts.

Hanley said that in 85 percent of U.S. cities, transit fares have gone up or service has been cut. When the Chicago local’s contract expired at the end of last year, members were pilloried in the newspapers for the unimagined luxury of having a paid coffee break (which actually turned out to be 10 minutes of paid time to check their steering and brakes).

Hanley told the crowd, “We have to fight injustice and somebody has to start it. A union officer’s job is not to move paper, it’s to move people.”

The Friday night plenary featured Ehab Shalaby, an engineer in a textile plant and member of the Egyptian Democratic Labor Congress; Alfredo Galdanez, a leader in ROC-Chicago’s campaign at the Capital Grille restaurant; Adrienne Pagac, co-president of the teaching assistants’ union at the University of Wisconsin; and Labor Notes’s Mark Brenner.

"From Cairo to Madison, 2011 was the year people stood up—or sat in—putting democracy back on the agenda," Brenner said. "The game changer for most of us was Occupy Wall Street. 99 to 1—I like those odds!"

Proving once again that unionists in other countries know more of U.S. labor history than we do, Shalaby, speaking in Arabic, said he was happy to celebrate “labor’s day”—May Day—in the city where it began. Demanding an eight-hour day, 400,000 Chicago workers went on strike in 1886. Four were later executed on trumped-up charges.

“Nothing is without sacrifice,” Shalaby said, recounting the strike wave that has swept Egypt since last year, and the revolution that claimed many lives.

Shalaby said his union federation is reaching out to the whole Arab world because Egypt is the door to that world. “We all live under one sky,” he said. “In Egypt we have a saying: workers of the world, unite.”

Pagac told how her union had begun the occupation of the Wisconsin Capitol in February 2011. The fact that the union has high turnover means it is always organizing to maintain membership, she said—and that meant it had mechanisms in place to move quickly. Pagac said one lesson she’d learned from the four-week uprising was that there are many ways to participate in political struggle that don’t involve casting a ballot.

Galdanez, pictured below with interpreter José Oliva, said he makes $8.50 an hour as a dishwasher at the Capital Grille, target of a national campaign by the Restaurant Opportunities Center (ROC). He recounted stories of disrespect from managers and injuries that go untreated, conditions that ROC aims to address with its demands that the Darden Restaurant Group end discrimination and raise pay. The corporate food system, he said, literally cuts and burns workers, displaying the damage wrought to his body.

In the Sunday plenary session, Occupy activist Michelle Crentsil lauded the cooperation of the Occupy Wall Street movement and labor but did not shy away from criticism. She pointed out that there are tensions within the 99%, and in order for labor and Occupy to move forward together, we must do the hard work of acknowledging and addressing racism and other oppressions among us.

Some unions, like the Chicago Teachers Union, UAW Local 551, SEIU Healthcare Illinois Indiana, the Federation of Professional and Technical Engineers, and AFSCME Local 3800 at the University of Minnesota, turned out big numbers and used the conference as a boot camp of sorts.

Jen Johnson, a Chicago history teacher who spoke Saturday morning, said her union is facing off against "Mayor 1%" Rahm Emanuel over school closures, a longer day with no additional pay, and a draining of resources from the public school system into charter schools and corporate tax breaks.

The union's fighting stance started with a caucus that organized against school closures because the old union leadership wouldn't. When they got into office, state legislators ganged up to pass a special law limiting Chicago teachers' right to strike. But because of the member to member organizing the union has undertaken, including practice strike votes, CTU can now present a credible strike threat.

Union members from coast to coast are making it clear they're hungry for a fighter in their corner. From the new leadership at the New York State Nurses to the second generation of reformers in AFSCME Local 3299 on California campuses, attendees at the conference brought plenty of reasons to be confident that rank and file workers see what so many union leaders don't: that the power is still in our hands.

Between the workshops and special industry and sector meetings, where teachers, transit workers, and others had the rare opportunity to meet and discuss across their unions, participants had the opportunity to plan their own meetings in a DIY space.

John Colleran is an Electrical Workers (IBEW) Local 2222 member, active in the Verizon strike last summer on the East Coast. He was targeted by management and fired in the strike, and has been waiting to win his job back as the wheels of the NLRB slowly grind. He particularly appreciated the "ask the experts" section of the conference, which gave him (and many others) time to buttonhole lawyers for advice.

Fellow Verizon worker and CWA Local 1101 organizer Ken Spatta spoke Sunday on the long road of reform inside his union, which culminated in a takeover of the local in the wake of last summer's Verizon strike.

The strike showed who the local's real leadership was. With no warning, Spatta said, the local's reform caucus put picketers on the street just a half hour after the national union called the strike. Reformers stepped up to captain picket lines and take extra shifts protesting at wireless stores.

The strike stalled, but Spatta said his local and the other fighters inside CWA and the IBEW are still working to mobilize against a company whose CEO makes $55,000 a day—including weekends.

Colleran and another 50 telecom workers spent all day Friday in a strategy session that took on special import this year with both AT&T and Verizon workers facing difficult contract talks simultaneously. One of the first orders of business was drafting a petition to CWA Local 7250 President Mona Myer, asking her to drop internal union charges against Labor Notes attendee and steward Kieran Knutson, an aggressive mobilizer and contract enforcer.

The two "core" sections of the CWA and IBEW don't communicate with each other as much as one might think, leaving participants pleased that they had a chance to think through what a combined plan of attack might look like.

Labor Notes troublemakers don't just talk, though: Hundreds turned out for three actions through the course of the weekend, in support of SEIU Local 1 airport workers, the Restaurant Opportunities Center organizing against the wage-thieving Darden chain, and, at a huge Saturday picket line, UNITE HERE members at a Hyatt down the street from the conference.

"Up, up with the union, down, down with the Hyatt," shouted hundreds of demonstrators at a rally that filled a city block.

The picket line greeted hotel workers coming outside on their lunch break. Jose Guevara, a 27-year member and steward with UNITE HERE Local 450, updated participants on the long fight to save affordable health care, improve health and safety by limiting rooms each housekeeper must clean per shift, and win an agreement from the chain to allow workers in non-union hotels to organize without interference.

A late-night concert featured Rebel Diaz and Quinto Imperio, and tours Friday and Monday introduced out-of-town guests to important labor history sites in Chicago, including Haymarket Square and the Battle of the Viaduct.

Just over a year after the tragic Fukishima disaster, Japanese labor activists took the stage at the Saturday banquet to celebrate the shutting down of Japan’s last nuclear reactors with fellow conference-goers. The nuclear shutdowns, which happened earlier that day, coincided with Children’s Day, a Japanese holiday traditionally celebrated with carp flags and banners. The carp has become a symbol of the country’s anti-nuclear movement and the hope for a better future for the next generation.

The Japanese delegation passed out paper fish flags and waved a large carp banner from the stage. Proving that solidarity transcends national, cultural, and linguistic barriers, they led the crowd in an anti-nuclear chant.

Elise Bryant, recently retired labor educator but fully employed hell-raiser, steered the Saturday night banquet and the Troublemaker awards. One of the awardees was the UAW’s Jerry Tucker, famous for troublemaking both inside and outside his union but now laid up. After Jerry’s daughter Tracy accepted the award on his behalf, Bryant led the crowd in a healing song.

First-time attendee Seamus Whelan, a member of the Massachusetts Nurses Association, was impressed with the broad international participation at the conference—participants from more than 20 countries took part. He only wished that the Labor Notes Conference could set the outlook for the whole labor movement.

Read other impressions of the conference here.