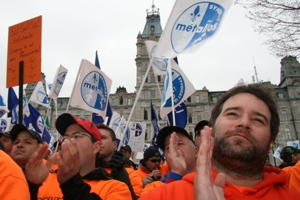 Locked-out aluminum workers rallied at the Quebec National Assembly to protest government subsidies to Rio Tinto. The provincial government is giving the mining company $14.5 million a month during the lockout. Photo: USW.

In the small community of Alma in southern Quebec, unions gathered on March 31 for a solidarity march to denounce the lockout of 780 aluminum workers. They came from from all over Quebec and Canada and from a dozen countries where the multinational mining giant Rio Tinto has installations.

In a Quebec where everything is in motion, where a student uprising of thousands is manifesting each day in the streets of Montreal, this fight is resonating.

Representatives from Rio Tinto unions worldwide and the ICEM, the global federation of mining and energy unions, met to strategize against the aggressively anti-worker company.

Rio Tinto has become a target of activists worldwide for its mistreatment of workers and its pillage of the environment as it strips aluminum, gold, iron ore, copper, uranium, coal, and diamonds out of the earth. In 2010 it locked California boron miners out of their jobs for 107 days seeking concessions.

On April 16 the union federations launched the Off the Podium campaign (offthepodium.org), asking the International Olympic Committee to exclude Rio Tinto from the list of official suppliers for the London Olympics. Metals used to make the Olympic medals come from Rio Tinto mines.

The aluminum smelter workers of Rio Tinto Alcan argue that it goes against Olympic values of solidarity and fair play for an employer to put its workers out the factory door on a cold New Year’s Eve in the middle of the night without any warning.

Workers were not even allowed to go through the normal decontamination process to wash off the toxic beryllium they work with, as 150 security guards from outside the province escorted them through the gates.

Management was demanding that Steelworkers Local 9490 agree to replace workers who retire with subcontracted workers paid half their salary, without benefits or a pension.

The Alma facility is the most profitable aluminum smelter in Quebec.

“Our demands are more than just for wages,” says local president Marc Maltais. “Our members fight to maintain decent jobs in their community for the future generations. They refuse to succumb to the spiral downwards towards cheaper labor. This fight is important for quality jobs in our region for today and for tomorrow.”

Executive board member Robert Gagnon told the Labor Notes Conference May 6 that a company executive had predicted that “the wife influence factor” would bring the locked-out workers back to work. In response, workers’ wives organized a 200-strong picket.

Twenty locked-out workers walked 212 kilometers to the Quebec National Assembly May 1-3, in a protest baptized the Energy March. Several hundred of their locked-out co-workers, and workers from Rio Tinto’s other installations in Quebec and other unions, waited for them. The marchers handed a petition signed by 12,000 people to their representative.

This petition denounces the fact that Rio Tinto Alcan is being subsidized by public money. A contract obligates the Quebec government to buy hydroelectric power that Rio Tinto produces with its private dams, bringing in a monthly income of $14.5 million and enabling it to keep the lockout going although production is down by two-thirds. Quebec law forbids the hiring of scabs, but managers are working.

“This conflict is made possible by the money of the taxpayers of Quebec,” said Daniel Roy, Quebec director of the Steelworkers.

A daily paper in Quebec made public the secret agreement at the end of March. The agreement defines a lockout as a force majeure that triggers the requirement that Quebec buy the energy.

Common in many contracts, a force majeure clause usually refers to an extraordinary event such as a war or a hurricane beyond the control of the parties; such clauses came into effect in the U.S., for example, after 9/11. The government is also committed to an interest-free loan of $400 million, without any conditions that the company create jobs, over 30 years.

After the revelation, Maltais appeared on the “Everyone’s Talking About It” television show, regularly seen by more than a million viewers. “The government of Quebec is waking a monster,” he said, speaking of the large number of lockouts raging in Quebec and to the solidarity that has developed because of them.

Nine lockouts are currently underway in the province. The government has done nothing to ease any of these situations, despite widespread public support for the workers.

The International Olympic Committee will meet in Quebec City May 23–25. Local 9490 members will protest and ask IOC President Jacques Rogge to kick Rio Tinto off the podium.

On May 14, supporters held a rally in front of IOC headquarters in Luzerne, Switzerland. The Off the Podium campaign is supported by major labor federations worldwide, as well as three of the most important unions in Australia, which, along with Canada, is where Rio Tinto has most of its mines.

Jocelyn Desjardins works for the United Steelworkers. To learn about solidarity with the Rio Tinto workers or offer them financial support, go to justiceforriotintoworkers.ca.