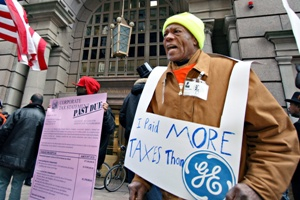 GE paid no net taxes over four years. It even got a refund. Unions are hammering on the manufacturing giant's fast and loose approach as they lead a spurt of organizing. Photo: Massachusetts Uniting.

If the war against unions has reached a tipping point, Wilma Smith is among those determined to rebalance the scales.

The 58-year-old assembler at the General Electric plant in West Burlington, Iowa, was called back to work in September.

She had been on layoff since 2007 from the non-union factory, which makes electrical switch gears for municipalities and energy-hungry factories, hospitals, and call centers. “You know how you have a fuse box in your house?” she asks. “These are like fuse boxes for a city,” the size of a refrigerator.

But the job came with new terms: a 50 percent pay cut—she’d now make $12 an hour. No health care coverage when she retired. And no chance she’d get the $5,000 bonus GE’s union workers won in last year’s national contract.

“You know what the deal is, so I don’t want to hear any complaining,” the manager at the 150-worker plant told her at orientation.

Six months later Smith is a leader in the Electrical Workers (IUE-CWA) organizing committee that’s expecting a Labor Board election in April.

The campaign was buoyed by a successful January vote at a GE factory that refurbishes locomotive motors in Kansas City, Missouri, the first GE plant to go union in a decade.

Success breeds success, and organizing is now under way in several other locations. “As soon as they heard the workers in Kansas City won, another group called us up immediately,” said Mike Knox, an Electrical Workers (IBEW) organizer involved in the Missouri win.

The organizing is a glimmer of hope against a dark backdrop for manufacturing unions struggling to maintain jobs and decent standards. Their efforts are further stymied by recent actions of the Obama administration, which seems to support the notion that low wages are the answer to globalization and runaway shops.

When she joined GE in 2000, Smith tried to convince co-workers a union would improve conditions in the shop. A former bargaining committee member, local union secretary, and steward in now-shuttered Steelworker and Auto Worker plants, she told them how vulnerable they were without a contract.

She didn’t get many bites, at a wage of $24 an hour. And the plant had a grievance-like “peer review” procedure to resolve disputes.

“They said there was no way they could treat us better,” Smith remembered. “I said, ‘They can always treat you worse.’”

But for decades, GE mostly didn’t. The company spread whatever gains its unions made to non-union workers, to keep organizing at bay.

At the same time, after losing a 1946 strike badly, management adopted a hard-line stance against unions, preaching the gospel of individual responsibility. GE closed plants in the unionized North, shipping jobs South and West, and adopted a “take it or leave it” approach to negotiations, termed “Boulwarism” after its labor relations chief.

The company was a model of de-unionization and corporate triumphalism, even hiring the struggling actor Ronald Reagan to give 135 speeches on factory floors in the ’50s and ’60s, praising “free markets.” (Reagan’s memoir called the GE tours “a postgraduate course in political science” and the turning point in his “self-conversion.”)

The number of GE workers overall has also plummeted in the U.S. The company has closed 30 U.S. plants in the last four years, leaving about 130,000 employed in about 100 locations, says Chris Townsend, political director of the United Electrical Workers (UE). Securities and Exchange Commission filings count 34,000 jobs lost at the company between 2000 and 2010.

“Once, we assured the wage and benefit pattern was broadly shared among the non-union universe,” Townsend said. “Now, of course, they’re more than happy to pass along our losses.”

GE certainly isn’t the only corporation to crush unions, ship jobs overseas, and skirt taxes. But it’s very good at it: The watchdog group Citizens for Tax Justice reported in February that GE paid just 2.3 percent in federal taxes on $81.2 billion in U.S. profits in the last decade. In four years, the company had a negative tax rate—actually claiming a refund.

GE stands out for its special relationship with the Obama administration. CEO Jeff Immelt heads the Council on Jobs and Competitiveness, where he is credited with helping convince Obama to propose chopping the corporate tax rate to 28 percent.

Last year Obama strolled through a GE plant represented by the IUE-CWA, praising the company as a “model for America,” because it had returned some work to U.S. factories. Obama appears committed to GE’s wage-slashing approach to revive manufacturing, calling it “insourcing.”

Jeff Lacher, an organizer with IUE-CWA, says GE is testing workers to see what it can get away with—and came after the Burlington workforce big-time. Management threatened to close the plant in December 2010 unless it got $8 million in savings, terrifying a workforce where almost everyone is over 40 and many couples work alongside each other.

“If you put people on the butcher block, they’ll agree to anything,” Smith said.

The city, county, and state kicked in $2.4 million, and workers saw wages cut by up to half. GE even had the non-union plant take a vote on the wage cut, “so they could claim it was negotiation, not extortion,” Lacher said. Burlington worker Harold Smith (no relation to Wilma) says management refuses to release details on the vote.

The most senior workers, who had put their entire working lives into the plant, are now the anchors of the union drive. Wilma Smith says some of her shift-mates qualify for food stamps and Iowa’s health plan for low-income people.

The Burlington workers aren’t fearful of retaliation for organizing, she said—factories down the road pay just as little, and they’re hiring.

At the Kansas City engine plant, workers had tried for a union three times before they won their second vote with the IBEW in January.

Along with a string of broken promises following previous votes, a fatal incident in 2010 was a major motivator. A worker was caught between two swinging locomotive engine motors. His legs crushed, he died in the hospital.

Once the organizing broke into the open, GE tried to separate pro-union older workers on first shift from younger, less-enthusiastic workers on second. Managers eliminated a weekend “super-shift” where the two overlapped, so organizing committee members would meet the younger workers when they got off at midnight and stay up almost till dawn answering their questions.

Instant-response handbills would answer the company’s charges and accusations on the same day.

Back in Iowa, Harold Smith is getting used to seeing the police called when organizing committee members are out front with leaflets. The cops—who are IUE-CWA members, too—told him they’d received a complaint the union folks were “inciting a riot.”

“It’s been a wild ride,” Smith said. “We’re afraid we’re going to lose more than we have already. Maybe with some representation we can at least hang on to what’s left.”

A version of this article appeared in Labor Notes #397, April 2012. Don't miss an issue, subscribe today.
Related
Video Game and Tech Workers ‘Drop the U-Word’ »
Viewpoint: The NLRB is Underfunded and Understaffed—And That’s a Big Threat to the Current Organizing Wave »
Review: On the Line: A Story of Class, Solidarity, and Two Women’s Epic Fight to Build a Union »
Mike Parker: A Labor Educator with Impact »
Steward's Corner: How to Think Like an Organizer »