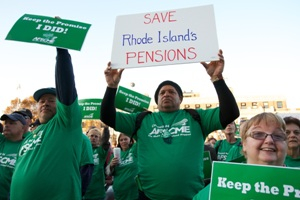 If you thought retiring would help you avoid the ruination of living standards brought on by the economic crisis, Rhode Island’s pension overhaul just proved you wrong. Photo: AFSCME

If you thought retiring would help you avoid the ruination of living standards brought on by the economic crisis, Rhode Island’s pension overhaul just proved you wrong.

The changes to the pension system passed last November affect every public employee—current, retired, or prospective. The retirement age rose from 62 to 67 for new hires, and somewhere in between for current employees.

The overhaul moves all public employees into a “hybrid” system, combining a defined benefit plan with a 401k-style plan, thus shifting risk for bad investments onto workers. And it freezes cost-of-living adjustments for all retirees and retirees-to-be for 19 years, sending their standard of living tumbling.

The drama began in spring 2011, when newly elected state Treasurer Gina Raimondo, a Democrat, and Governor Lincoln Chafee, an independent, began focusing on the state’s unfunded pension liability and the looming crisis it represented.

Both politicians had been enthusiastically supported by the labor movement, partially on the basis that they would not touch pensions. But now they argued that the state had on hand only about half the money it would need to pay pensions for state workers and teachers over the coming decades.

The amount that the state owed but didn’t have was the “unfunded liability,” and to make the fund stable, Raimondo and Chafee argued, it had to be funded at a level closer to 80 percent. That’s the “green” level that private sector pensions need to reach under the federal Pension Protection Act.

But that rule doesn’t have to apply to governments. When a corporation is bankrupt, retirees run the risk that pension funds will disappear with the company. Thus workers seek to have much lower unfunded liabilities.

But when a government goes bankrupt, it does not disappear. Even if its pension fund shrinks, it can still be raised again during better times or through increased revenues. The concern around the “unfunded liability” in this instance was used to cut benefits and hurt workers.

In the media, free-market conventional wisdom pushed along an argument for bolstering the fund while avoiding increases to Rhode Island taxpayers. As the market was not likely to perform well enough to make up the shortfall, the only source left was workers’ pockets.

While Rhode Island teachers had always paid into the fund at rates of 9.5 percent of income, and state workers at 8.75 percent, the same was not true of the state. Rhode Island had raided the fund in the 1990s and never made up the difference.

Further problems came with Republican Governor Donald Carcieri in the 2000s. He cut state agency staffing levels and forced state workers into retirement early, thus reducing the base of workers paying into the fund.

The real tipping point came in April 2011, when the state Retirement Board voted to lower the projected rate of return on investment from 8.25 percent to 7.5 percent. By one change in accounting, the board suddenly increased the unfunded liability by $1.4 million and doubled the burden on state agencies and local school districts.

Said pension policy analyst Tom Sgouros, “It’s the triumph of the technocrats who make tremendously value-laden judgments and disguise it as technical details.”

The now-inevitable move to cut benefits sped forward in August, when the city of Central Falls went bankrupt and retirees there saw their pensions cut in half.

Chafee and Raimondo pushed a plan aimed at cutting benefits for all retirees while forcing current workers to pay more into the system.

Most important, they started the shift from the traditional defined-benefit pension toward a defined-contribution, 401k-style plan. The hybrid plan effectively puts more risk onto workers and retirees. If the market does not perform well, they’ll absorb the losses.

The hybrid would pay benefits to future retirees at 40-57 percent of the average of the last five years of pay from the defined-benefit side of the plan, plus a portion from the defined-contribution side to lift the overall benefit to around 70 percent of pre-retirement income.

This is a decrease from the current 75 percent rate. Of course, if the market crashes again, it could be much lower.

The plan also eliminates any cost-of-living adjustments for the next 19 years for everyone, including current retirees already receiving benefits. The result is a direct impoverishment of Rhode Island’s public sector workers in retirement.

As the vote on the legislation neared in November, unions mobilized to fight the impending disaster. They launched an information campaign among members, including a widely circulated YouTube video, brochures in the mail urging workers to contact legislators, and meetings around the state.

A rally drew up to 5,000 union workers to protest the assault. Unfortunately, the unions’ message came down to “save our pensions” for the roughly 25,000 current teachers and state workers and roughly 22,000 retirees.

At the same time, business groups poured more than $500,000 into television ads supporting the pension cuts. The same groups also contributed the maximum amount to major legislative leaders, all Democrats, after the legislation was approved.

It passed overwhelmingly, with 77 of 94 legislators approving. A Brown University poll released shortly after showed 60 percent support for the bill among the voting public, a clear indication that the business campaign had succeeded in vilifying public workers.

Ironically, just as the overhaul was being pushed through, the Occupy movement was refocusing the public discussion around “we are the 99%.” It was not enough to stop the attack on public workers.

According to the Pew Center, Rhode Island was one of 35 states to enact pension changes in 2010 and 2011. But while most of those attacks affected only employees yet to be hired, Rhode Island’s was unprecedented in its scope and depth—hitting both current employees and, through the COLA freeze, current retirees.

Chillingly, Fitch Ratings, a major credit rating agency, speculated that “the sweeping nature of the reform may inspire similar efforts in other states grappling with large unfunded pension obligations.”

In the aftermath, Raimondo has garnered national attention. She has the highest approval rating of any Rhode Island politician. Her campaign fund grew by over $200,000 last summer, to over $500,000 total, during a time in which she did not organize any fundraisers.

Like Andrew Cuomo in New York and Deval Patrick in Massachusetts, she emerges as a well-known pro-business Democrat, the sort of politician who can get the job done for the corporations—without the clownish rhetoric of a Tea Party Republican.

The battle now moves to the field of municipal pensions.

The state’s cities and towns face massive budget crises, precipitated by a systematic and catastrophic decrease in state aid to municipalities over 20 years.
Chafee announced a plan in March that would shift city governments’ financial pain to workers, driving down their compensation and eliminating jobs while cutting services, such as trash collection and care for the elderly.

While the number of workers affected will be smaller, the effects will likely cut deeper.

The plan would give municipalities the freedom to freeze COLAs for current retirees, as well as reducing the amount of tax-free benefit on accidental disability pensions. It would hand municipalities power to disregard an expired contract and impose conditions, or refuse to pay newer teachers their step raises.

The story of pension “reform” in Rhode Island is a cautionary tale for the labor movement. While the state’s unemployment rate is now 11 percent—the second-highest in the country—94 percent of corporations here pay nothing in taxes. The name of this game is austerity, and it’s supported by both parties as well as the sometimes “independent” governor.

In order to fight it, our unions will have to demand the real solution to this crisis: tax the corporations and the rich!

Brian Chidester is a teacher and member of the Bristol-Warren Education Association. He blogs at riredteacher.wordpress.com.

Just look at how the democrats are now republicans owned and subserviant to the same oligarical masters. Until we get control of the "Banksters" nothing is going to happen good for the common person. Obama could have and did not. He could have told the Justice Dept. to go after them and did not. Instead he has helped them become even more dangerous and has helped to make those crazy laws concerning our freedom even more onerous. What I say is that I need a gas mask for Obama and a nuclear haz-mat suit for the republicans. Doesn't say much good about either side. Just today Mayor Villaraigosa, King Tony, declared he was going to raise the retirement age here in L.A. I guess he saw this movement in Rhode Island and said to himself "why not do it here?" The U.S. is now a criminal organization. Let's face the facts. We are now a fascist country intent on controlling the planet in our Imperial manner. We are going to lose that one and probably, if we do not wake up soon, destroy this blue ball we live on.