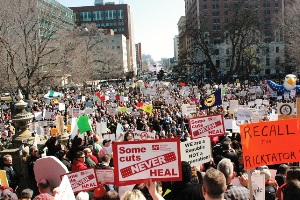 Michiganders protested Governor Rick Snyer's power grabs. A right-to-work law may be next on the agenda, so unions are going on offense. Photo: AFSCME.

Facing a right-to-work threat and dozens of other anti-worker bills, unions in Michigan are going a different route.

Rather than waiting for the critical moment to round up the troops and flood the state Capitol, they are mounting a campaign to make many anti-union bills unconstitutional.

The AFL-CIO-funded Protect Our Jobs coalition launched a petition campaign March 6 for an amendment to permanently enshrine collective bargaining rights in the Michigan constitution.

If the amendment passes, the legislature would be barred from doing anything to “abridge, impair or limit the right to collectively bargain for wages, hours and other terms and conditions of employment.”

The proposed amendment would not only ban right-to-work laws. It could potentially make unconstitutional recent legislation such as a ban on dues check-off for teachers, the elimination of bargaining rights for certain workers, and parts of the state’s controversial emergency manager law, which gives appointed managers the ability to unilaterally cancel union contracts.

Backers of the constitutional amendment believe that by addressing what unions share in common—rather than responding piecemeal to different bills—they can harness the full force of organized labor in the state.

Endorsers include the Transit Union (ATU), AFSCME, the Michigan Nurses Association, the Auto Workers, both teachers unions (NEA and AFT), and the Utility Workers Council. They have until July 9 to collect 322,609 signatures to get on the ballot in November.

UAW President Bob King has announced a goal of 500,000. No polling data to gauge public reaction have been released yet.

While governors in Wisconsin and Ohio sought to eviscerate public employee unions in one fell swoop, “workers here in Michigan are dying a death of a thousand cuts,” says Protect Our Jobs Treasurer John Armelagos, an RN and leader in the Michigan Nurses.

He points to more than 80 anti-worker bills introduced in the legislature, which attack everything from public sector benefits to prevailing wage to tenure.

The legislature has already made good on some of those threats. In March, it passed a law denying graduate research assistants at public universities the right to unionize, a response to organizing at the University of Michigan.

Lawmakers also banned automatic dues deduction for teachers, forcing their unions to collect dues by check each month or sign members up for bank draft.

“They’re counting on us getting less money so we can’t do what we’re supposed to do—advocate for members and lobby against bills like the one they just passed,” says Mark O’Keefe, controller at the Detroit Federation of Teachers.

Most recently, Michigan and the city of Detroit entered into a consent agreement to give financial control of the city to an unelected board. Sold as a compromise to avoid takeover by a state-appointed emergency manager, the agreement imposes sweeping cuts to services and attacks city workers.

Despite the fact that unions had just ratified contracts with 10 percent pay cuts, more concessions are being demanded whether unions agree to them or not. According to the consent agreement, the city must have “either negotiated or imposed new labor agreements” by July 16.

The agreement includes 12 provisions that must be in the new contracts, including givebacks on retirement benefits, merit-based promotions, and a free hand for the city on outsourcing.

“The very thread of democracy to which we hold is being severed,” says Pam Powell, a Ford worker. “Your vote doesn’t count anymore, your union doesn’t matter.”

“Legislators wouldn’t have been able to do anything—constitutionally—to interfere with collective bargaining,” she said.

The piecemeal attacks in Michigan have meant that no one piece of legislation has posed a wide enough threat to trigger mass opposition like that seen in Wisconsin, Ohio, and Indiana.

That could change. Republicans in both the House and Senate have signaled intent to make Michigan a right-to-work state and are exploring language for a bill. Right-to-work laws allow workers to avoid union dues while still maintaining the benefits of membership, depleting union resources and destroying solidarity.

Governor Rick Snyder maintains he’s not interested in pushing right to work in Michigan. He has asked union leaders to back off the amendment, saying it would create a “divisive atmosphere.”

But unionists note he’s signed every anti-union bill to come across his desk.

“His office has been anti-worker, anti-retiree, anti-everybody,” said Katie Kelley, secretary-treasurer for ATU Local 1039. “I don’t put a lot of faith in the whole ‘I’ll do the right thing’ speech.”

In the weeks since the petition campaign launched, members across the state have been hitting the pavement. Petitioners say the vast majority of folks they’ve spoken with have been supportive.

Protect Our Jobs organized a massive signature-gathering effort for the baseball season’s opening day. Armelagos, of the nurses, said the campaign is bringing together unions that didn’t work alongside each other before.

The UAW is circulating petitions in every plant and at every membership meeting. The Michigan Nurses have petitions out in all their locals. In Ann Arbor, members are canvassing passers-by on street corners. Keith Johnson, president of the Detroit Federation of Teachers, says members are taking petitions door to door.

The proposed amendment has its critics, however. Ford worker Jeff Brown says some folks are angry that unions came up with the amendment on their own, and didn’t join community groups to mobilize against the emergency manager law.

While the constitutional amendment would prohibit emergency managers from invalidating union contracts, it would do nothing to address the service cuts or nullification of local democracy that are integral to the manager law.

Critics also take issue with language that bans strikes by state employees. Says one representative for a large public sector local, “It’s already illegal in Michigan. Why are we—the union—embellishing this by putting it in the constitution?”

Others are critical of language on promotion by merit, not seniority, for state civil service employees.

Hurwitz speculates that the inclusion of such language was an attempt to limit right-wing opposition. If that’s the case, it doesn’t seem to have done much good.

Republican Representative Mike Shirkey, the leading proponent of right to work in the House, has called defeating labor’s amendment his highest priority.

Supporters of the amendment say it’s worth fighting for. “If you’re always in a reactive or defensive position, you’ll always be scrambling,” Powell said. “We’ve got to get to the point where labor is on the offense.”

A version of this article appeared in Labor Notes #397, April 2012. Don't miss an issue, subscribe today.
Related
Union from The Start (You Don’t Have to Wait) »
Ballots Out in UAW Presidential Run-Off »
2022 in Review: Harsh Conditions, Good Surprises »
Challengers Win Big in UAW Elections; Presidency Headed to Run-Off »
‘No Contract, No Matisse’: Philadelphia Museum of Art Workers Win First Contract After Strike »