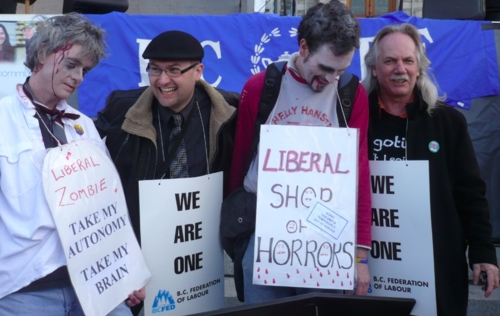 British Columbia teachers said the Liberal Party legislators who forced an end to their strike were behaving like "zombies." The teachers are figuring out how to continue their struggle for decent class sizes while under threat of $20 million a day in fines. Photo: BCTF.

Teachers in British Columbia are planning their next moves after legislators in the Canadian province forced them back to work after three days on strike.

The ruling Liberal Party’s early March strike-killing legislation banned teachers from job actions for six months and held that disagreements that couldn’t be resolved could be settled by further legislation unilaterally imposed.

The provincial government appointed a mediator whom the British Columbia Teachers Federation has protested—he was involved in crafting the back-to-work legislation. The government threatened fines of up to $20 million a day should the BCTF engage in any job actions it deemed illegal under the new law.

On the eve of the strike, Vancouver students organized their own walkout and rally in solidarity, adding their voices in support of adequate resources for public education.

Momentum gathered as the BC Federation of Labor organized alongside the BCTF in its protests. Government offices were shut down for a day as 15,000 teachers joined by union brothers and sisters marched in the streets of the capital, Victoria, and filled the grounds of the legislature to overflowing.

All over the province, rallies and demonstrations took place—the mood was upbeat and members felt their collective power. In Vancouver, a rally drew more than 4,000 teachers and supporters to the steps of the Art Gallery to hear a call to action from teacher leaders, parents, students, and labor leaders.

The union office was in full operation from 4:30 a.m. until late at night as strike bulletins and public information leaflets were prepared and delivered to the lines. Coffee runs were set up and rallies organized. Many parents showed up to support teachers at their schools. In one community, the local doughnut shop ran out of stock because so many from the community took sweets to the teachers’ picket lines.

The situation is polarized, of course: Others flooded talk radio shows with attacks on the union.

Still, the strike had almost 100 percent participation from members, and parent complaints were few and far between as they supported each other in getting care for their children.

The union is seeking to restore limits to class size, limits to the number of students with special learning needs in each class, and staffing formulas that guarantee that schools have special education specialists, counselors, English Language Learner teachers, and teacher-librarians.

The teachers also seek an increase in salaries and benefits, keenly aware that they gave up salary increases to gain agreements on class size, class composition, and staffing formulas in the 1990s. But a right-wing government brought in legislation that eliminated all these guarantees a decade ago, cutting 10 percent of teaching positions and substantially harming working and learning conditions.

BCTF sued over that legislation, saying that suppressing bargaining rights through legislation was illegal. The UN’s International Labor Organization five years ago ruled in the union’s favor, but the provincial government ignored it.

And now the government is refusing to right these historic wrongs. After 12 months of bargaining, which included 78 provincial bargaining sessions and countless local bargaining sessions, teachers continue to face big contract concessions, including the loss of basic labor rights such as seniority, fair evaluation, and control over professional development. Wages would sink under the government’s “net zero” demand, which would require any raise to be traded for an economic concession elsewhere.

The government has responded to teachers’ demands for class size and composition control by removing any caps or guarantees of support, stating that administrators need “flexibility.”

The teachers had prepared for the strike through a “teach only” job action for seven months, which involved refusing to perform management tasks such as supervision of students during lunch time, on the playground and in hallways, and before and after school. Teachers refused to fill out report cards, and instead worked out ways of communicating directly with parents.

Many teachers reported that they appreciated having more time to actually concentrate on planning and teaching. On the other hand, administrators felt their workload increase.

Even after teachers reduced their demands at the bargaining table, including a more modest salary proposal and fewer improvements in benefits, the government remained intransigent.

Throughout these developments, teachers have felt substantial encouragement from the public. Surveys indicate that at least 61 percent oppose the government’s legislating a contract and the same percentage feel teachers should hold out for a cost-of-living raise.

Vancouver’s District Parent Advisory Council dispatched a letter to the minister of education stating that parents “unanimously value our teachers” and expect the government to “arrive at a fair settlement that supports a fully funded education system and builds much-needed trust.”

The chair of the Vancouver Board of Education sent a similar letter, decrying the “bullying” approach of provincial leaders.

The membership will vote next week on an action plan. Teachers will limit participation in management meetings, continue to withdraw from voluntary services, and conduct a public education campaign to put pressure on the government to retract the bill and return to full and free collective bargaining.

The employer has already filed a complaint with the Labour Board and is asking for an injunction, saying teachers are on illegal strike now because they are not providing formal report cards despite an order to do so.

During this time of confusion, distrust, and enormous frustration, teachers are demoralized but have not given up the fight.

A version of this article appeared in Labor Notes #397, April 2012. Don't miss an issue, subscribe today.
Related
2022 in Review: Harsh Conditions, Good Surprises »
Viewpoints: How Academic Workers’ Leverage Can Grow in a Long-Haul Strike »
Every Union Contract Right Now Should Be the Best Ever »
Could We See a Rail Strike? »
Undaunted by Fines, Massachusetts Teachers Defy Strike Ban »