Postal Workers Need Support from the 99% 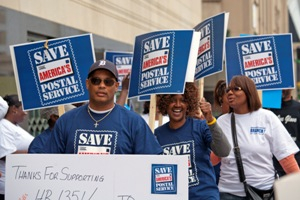 With service cuts and at least 100,000 layoffs threatened, what's happened to the Postal Service? Congress saddled it with billions of dollars of obligations, an attack that will take an army of activists to undo. Photo: Jim West.

A week before Christmas, Oregonians occupied post offices that were slated to close in 17 rural communities. Carrying Christmas cards, cookies, and gifts of appreciation for postal workers, the occupiers collected signatures on petitions to Congress to change the laws that caused the Postal Service’s $8.5 billion budget deficit.

Leslie Benscoter, a retired teacher from Deadwood, Oregon, told a local reporter, “Deadwood won’t exist in 10 years without a post office. That’s why I am an occupier. I occupy 97430.”

Back when I hired into the post office, it was a secure job. Wages and benefits were good, and you couldn’t be laid off. Now there is talk of closing 3,600 post offices, shutting 300 processing plants, eliminating Saturday delivery, and changing service standards so that mail that used to be delivered overnight will now take two to three days.

Management has requested at least 100,000 layoffs as well. So what happened?

In 2006 a lame-duck Republican-majority Congress passed a bill requiring the Postal Service to set aside more than $5 billion a year into a fund to guarantee health benefits for retirees up to 75 years from now. This money cannot be diverted to cover operating expenses.

But between 2007 and 2010, revenue taken in actually exceeded operating costs by $700 million, according to the USPS year-end 2010 report. It was the Congressional attack, not the Internet or other market forces, that caused the postal deficit.

Union efforts to get Congress to fix the problem have run into roadblocks. This battle takes place as public employees are blamed nationwide for government deficits. Plus, any legislation must go through a House committee chaired by the right-wing ideologue Darrell Issa of California.

When the Postal Workers (APWU) negotiated a contract in 2011 that preserved the no-layoff clause and no monetary concessions for current employees, Issa’s committee held hearings to demand that management attack postal workers more aggressively. (The contract did include a lower wage for new hires, much greater flexibility for management, and cost savings of $3.8 billion, but Issa and company wanted more.)

Many of the locations slated to close are in small rural communities like the ones being occupied in Oregon. Others are in poor urban neighborhoods. In my own neighborhood in Detroit, residents received a four-page letter announcing the closings that included a survey of postal usage. In small print it mentioned a meeting at a church to gather public input—but didn’t give the address. Nevertheless, dozens of people came to express their opposition.

Management’s plans to shutter post offices and relax service standards have provoked a backlash. Editorials in newspapers around the country criticized the move. Twenty-two senators requested a moratorium on the closures. Management agreed to a five-month pause, ending in May.

The postal unions joined together September 27 for a day of action, staging simultaneous rallies in every congressional district.

Still, in the months that followed, the most likely scenario appeared to be a compromise similar to so many that have occurred between the Obama administration and Republicans.

The Republicans would get the downsizing they want but without layoffs. Instead, the post office would get just enough financial relief to offer incentives for employees to retire (rumored to be $25,000).

Without significant pressure, Congress will probably accept a compromise that really is a defeat for the unions and the public. But there may be a glimmer of hope.

Rallies and mobilizations have already taken place in large cities and remote areas throughout the country.

They demonstrate the potential to activate many people beyond “the usual suspects” to defend a service many rely on and appreciate. People in every city, town, and village will be adversely affected by the cutbacks. We need an army of activists to reach them.

Such a mobilizing force exists: There are postal workers everywhere, who could reach into our communities to find our natural allies (including Occupy folks).

A strong message from the heartland can tilt the balance of congressional compromises, especially in an election year.

Paul Felton works at the USPS processing center in Pontiac, Michigan, and is a member of the 480-481 Area Local APWU.

Postal service has been a part of our history and culture that even with the advancement of technology, there are still millions of people who rely in postal service. The government on the other hand haven't found a better solution on how to address this pressing problem but lay off thousands of postal workers who have been in the service for years which I myself find it depressing. If the government continues to lay off workers, more problems will arise and one of which is the unemployment.
T Harv Eker

Postal workers need to go back to school and learn a skill that's actually needed in the 21st century instead of expecting the rest of us to continue to support an arcane money pit that primarily delivers junk mail at below cost just so the trucks don't move empty.
Seriously. We should be weaning the last hold outs off of paper and into the digital world instead of attempting to justify the existence of this ridiculous system just to keep postal workers employed to retirement. No one NEEDS Saturday delivery. No one NEEDS 3rd class mail. And parcels are delivered everywhere in this country for a fraction of the Post Office's labor cost quite efficiently and well by UPS and Fed Ex.
Honestly, it's laughable the extent to which some will stretch the imagination to justify maintaining more union jobs.
Sorry to hear about the end of your "sacred job" from which you never before feared lay off. Welcome to the real world where one has to stay competitive to stay employed.

As a realistic postal worker I CAN face the facts. We do not have the mail to keep us afloat without layoffs, without post office closings and the elimation of Saturday deliveries. It would be great if we can keep all that but we can not so face it. We need to be lean in order to survive. This has to start with management. If you do not touch the mail you should not have a job. A supervisor or manager does not do any act that makes the postal service any money. All they do is make it for themselves. As for the unions, they too have their hands out for the money from their members. Don't you agree that we have too many officers at the local and national levels?? I urge you all to read THE ROUTE that you can this ebook on Amazon.com. Feel the frustration!!!

I agree with your post in principle. postal management is indeed poor. Reductions in force (layoffs) are being bandied about for craft employees, but I have seen no real attempt to reduce management by the same ratio.

As far as the unions? I have major issues with them as well, but I would rather have them than not.

That being said the postal service would still be in the black if they we not mandated to prefund benefits for employees as yet unborn. Let us correct that situation and then see how it looks.