Not Just a Cheaper Pair of Hands 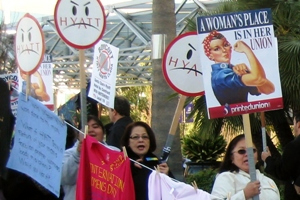 Women workers are attacking low pay and bias from many angles, assailing wage laws that exclude them, suing over discrimination, and organizing unions. And, like these Hyatt hotel workers, they’re confronting the disrespect that accompanies smaller paychecks. Photo: UNITE HERE.

Women workers are attacking low pay and bias from many angles, assailing wage laws that exclude them, suing over outright discrimination, and trying to organize unions. And they’ve been confronting the disrespect that accompanies smaller paychecks.

The gap decreased only because women’s pay didn’t drop as far as men’s, losing 0.9 percent while men lost 2.1 percent, according to the Institute for Women’s Policy Research.

The pay gap amounts to an average lifetime loss of $379,000, according to the Department of Labor. Or, looked at from the perspective of a Hyatt or a Walmart, every three women workers means another million dollars in executive pockets.

Discrimination is sometimes encoded in law, by mandating lower pay for jobs held mostly by women. Restaurant waitstaff and other tipped workers—nearly three-quarters of them women—used to receive more than half the federal minimum wage as their base pay.

But a furious lobbying effort by the National Restaurant Association changed that, shortly before the federal minimum wage was raised in 1996. The “tipped minimum” has languished at 1991 levels ever since.

That means that in most states, tipped restaurant workers can legally be paid $2.13 an hour, as long as their tips bring them up to the federal or state minimum wage. If the tips don’t add up, the employer is supposed to make up the difference.

But restaurant workers say this is largely fiction in an industry known for many flavors of wage theft. Claudia Muñoz, a server in Texas, said she was forced to report more tips than she had received so her bosses at a pancake restaurant wouldn’t have to make up the difference. Now she’s an activist with the Restaurant Opportunities Center in Houston.

In another effort, coordinated by ROC United nationally, workers in five cities are suing their employer, Capital Grille, for making them work off the clock and paying them the tipped minimum when they weren’t doing tipped work. The suit also alleges that Capital Grille, part of Darden Restaurants, fired Black servers because corporate leaders wanted a whiter waitstaff.

ROC United is cranking up a campaign to eliminate the lower minimum for tipped workers in more states and on the federal level.

In mid-February the group released a study, “Tipped over the Edge,” focusing on gender inequality in the restaurant industry. States that have eliminated the lower wage for tipped workers, including California, Washington, and Minnesota, have lower poverty rates among restaurant servers, despite having similar overall poverty rates, according to the study.

Gender bias is notorious in retail, too. Women workers suing for discrimination at Walmart were dealt a setback last summer when the U.S. Supreme Court said their record-breaking suit was too big. Now they’ve returned to court in California and Texas, suing on behalf of 140,000 current and former Walmart employees who they say experienced sex discrimination in pay and promotions in those states.

Martha Reyes saw the photos after she heard managers laughing by the bulletin board. “I felt humiliated, my reaction was to be angry,” she said. “I tore down my picture and my sister’s picture.”

Three weeks later she and her sister, Lorena, were fired. Lorena had worked for the hotel more than 20 years.

The two, both supporters of a union drive at the hotel, marched with 200 others in front of the hotel on March 8, International Women’s Day.

The marchers surrounded the hotel with clotheslines and pinned up hand-painted T-shirts with slogans like “My name is not Sweetie Pie,” and “I’m done being pushed around.”

Low pay goes along with the disrespect, said Lorena Reyes. Raises have been miniscule or nonexistent in her career there. She hasn’t been able to afford the health insurance, since premiums are up to $400 a month.

Management is resisting unionization at hotels in Santa Clara, Indianapolis, and San Antonio, while contracts at most union Hyatts expired more than two years ago. The union has been escalating its efforts, with week-long strikes and a widening boycott that the union says has cost the chain at least $25 million.

UNITE HERE seeks an agreement that allows workers to launch boycotts or strikes on behalf of other Hyatt workers. “We all work for the same company,” said Antonia Cortez, a San Francisco Hyatt housekeeper who participated in a week-long strike. “We should have the right to stand up for each other.”

The Reyes sisters have received considerable support, and not just from UNITE HERE. The National Organization for Women, the Feminist Majority Foundation, and women’s studies professors have all voiced solidarity and pledged to boycott the hotel.

Management’s response: to plaster posters of Rosie the Riveter on bulletin boards, with a voice bubble: “Hyatt Celebrates Women at Work.”

The housekeepers are going up against what Chicago UNITE HERE President Henry Tamarin calls “the 1% of the 1%.” Hyatt heir Penny Pritzker sits on President Obama’s Council for Jobs and Competitiveness, and is once again serving on his campaign fundraising committee.

The union recently pointed out that Pritzker family members, along with Hyatt CEO Mark Hoplamazian, have appealed their personal property tax assessments 70 times since 2003, reducing taxes on their Chicago mansions by $344, 000.

In Will County, Illinois, warehouse workers are making a public issue of the sexual harassment they say is endemic there. A county board member and a city council member heard testimony at a March 8 hearing that drew 100 people.

In the most egregious case, Latina immigrants at the Partners Warehouse complained to management about sexual harassment and sexual assault by supervisor Brian Swaw, the son of the vice president.

When nothing happened they went to the police in Elwood, a small town where the warehouses are the biggest source of revenue. But instead of investigating, cops filed criminal charges against the assault victim, 19-year-old Priscilla Marshall, for “filing a false police report.” She spent 16 days in jail and faces felony charges; two of her fellow workers were in jail for a week.

Marshall, her mother, and other witnesses were fired and some are being charged with forgery and theft of food from the warehouse.

Partners hired an investigator—a policeman and friend of the alleged abuser—to look into the sexual harassment charges. One worker says the investigator threatened him physically and suggested he could be deported.

The workers have filed suit with the Equal Employment Opportunity Commission and Warehouse Workers for Justice has started a legal defense fund. WWJ is signing up churches, unions, and politicians on a letter calling on the state’s attorney to drop charges.

The women are demanding that Partners be held accountable. They want Swaw fired and the workers made whole.

For women in hotels, warehouses, and restaurants, winning equitable pay will not be enough. Lorena Reyes said the union drive at her hotel is as much about claiming power on the job as boosting wages. “We want to teach these managers how to respect women,” she said.