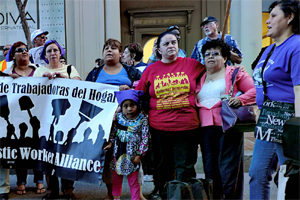 For 76 years domestic workers have been excluded from federal labor law—from overtime and safety and health protections in addition to collective bargaining rights.

The exclusion was no accident. When Congress debated the National Labor Relations Act (NLRA) in 1935, Southern representatives insisted that two groups who were then a majority African American be left out: farmworkers and domestic workers.

In the last two years, however, initiatives for domestic workers’ rights have scored important victories.

Activists in New York state won passage of a Domestic Workers Bill of Rights. Since November 2010 domestic workers receive time-and-a-half after 40 hours per week (44 for live-in workers). They are entitled to a day of rest every seven days, three paid days of rest per year, and protection under the state’s human rights legislation.

The U.S. Department of Labor in December announced plans to extend the minimum wage and time and a half for overtime to 2 million home health aides and personal assistants. (Other forms of domestic work such as housework and childcare would continue unprotected.)

And the National Domestic Workers Alliance, a coalition of more than 70 groups, is working for a bill of rights in California, modeled after the New York version, that would protect more than 200,000 childcare workers, housekeepers, and caregivers. They are anticipating a similar push in Massachusetts.

Matilde Vasquez, a live-out housecleaner in San Francisco who belongs to the Women’s Collective, a group of domestic worker activists, decided to get involved because of her own family’s experience.

“My mom used to work as a domestic worker inside the house,” Vasquez said, “where she cleaned and cooked for more than 10 years. In those days I saw her wake up at 5 and go to bed at 10 or 11, she didn’t have any vacation or insurance, and only one day off per week. When I do this I think that I’m honoring her.”

Right now, domestic work tends to be informal, with vague arrangements between employer and employee. The bill Vasquez is fighting for would entitle workers to the same wage and hour protections as other California workers, except for safety and health regulations. Meal and rest breaks, overtime pay, reporting time pay, and worker’s compensation would become mandatory.

California already has some overtime provisions for live-in domestic workers but it mandates only 150 percent of the $8 minimum wage, rather than the worker’s actual pay. If a nanny making $11 an hour works an extra hour, she gets only $12. The new law would up that pay to $16.50.

Domestic workers would be legally entitled to uninterrupted sleep while working 24-hour shifts or as live-in employees, and employers could not charge for personal access to their kitchens. Violations would incur a $50 fine, paid to the worker.

Vasquez says she wants not just the better pay and working conditions but recognition that her work is valued. “We are like any other employee,” she says. “This kind of job is nice because you’re helping people; most people work a lot and they don’t have time to get their house clean. Everything we do is an art.”

Andrea Mercado, an organizer with the California coalition, says the long-term goal is to bring domestic workers under the NLRA.

In New York, where the bill has been in place for over a year, organizers are making sure people are aware of their rights, says Luna Ranjit, director of Adhikaar, a worker center for Nepali-speaking people.

They are working with the state Department of Labor and getting members to reach out to others. “This sense of support has allowed a lot of our members to negotiate for better working conditions,” Ranjit says.

Enforcement can be difficult; the state Department of Labor is understaffed. Ranjit says there is a long backlog of cases for all the workers she aids, not just domestic workers.

But more than 60 workers have resolved claims against their employers with the help of a legal clinic set up by the Urban Justice Center and Domestic Workers United, the New York City group that fought for the law.

Activists now want to expand their gains by winning collective bargaining rights for domestic workers, bringing them under the New York State Labor Relations Act. One plan is to create a public or private entity that would function as the employer of domestic workers and that a union could bargain with.

DWU member Christine Lewis said organizing for the 2010 bill lifted the veil of silence around domestic work. “Women have become aware and conscious that there is a law that stands for them,” Lewis said. “All of a sudden everyone was sharing stories; people weren’t afraid any more.”