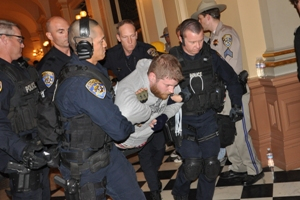 A California teachers union struck a deal with the governor to combine a millionaires tax with a sales tax boost. Union activists split on the move, saying it contains key flaws, but shows how the debate on taxes has shifted. Sixty-eight were arrested March 5 in Sacramento calling for education funding. Photo: Steve Rhodes.

Paving the way for an uncluttered ballot in November, a California teachers union struck a deal Wednesday with Governor Jerry Brown that would combine a millionaires tax with a sales tax boost.

The state’s labor movement had divided over the best way to put the need for public investment before the voters. The California Federation of Teachers (CFT) and other unions had pressed for a stiff tax on millionaires and were gathering signatures to qualify it for the ballot.

But with backing from the Service Employees (SEIU) and the California Teachers Association (CTA), Brown put forward a competing ballot initiative he touted as “shared sacrifice.” Crafted to minimize opposition from business, the Brown measure would have hiked the sales tax and raised income taxes by 1 to 2 percent on earners over $250,000.

The state sales tax in California, at 7.25 percent, is already the highest in the nation.

The compromise announced Wednesday would cut the proposed sales tax increase in half, to 0.25 percent, while lifting the rates for top earners higher than Brown had proposed.

“The petition drive to get the millionaires tax on the ballot did have a real impact,” said Mike Parker, a retired union activist who had pushed for the tax with the Richmond Progressive Alliance. “It forced Brown to make a significant shift towards taxing the wealthy.”

The version agreed to this week would raise about $7 to $9 billion annually at first, state Democrats said, before tailing off to about $5 to $7 billion a year.

The money will head to the state’s general fund, disappointing education activists who noted that the millionaires tax initiative had set aside money for schools. The state faces a $9 billion overall budget gap.

“The governor’s proposal will cut further from education,” said Caitlin Fox-Hodess, a head steward in UAW Local 2865 at the University of California Berkeley. “The purpose of the millionaires tax was to have a separate fund for education and essential services.”

Playing the Inside Game

Jim Miller, who teaches at San Diego City College and is political action vice president of the CFT local on campus, said the union’s leadership caved to the governor and the unions opposed to the millionaires tax.

“They folded like a cheap tent,” Miller said. “By including the sales tax, it leaves the door wide open to anti-tax types who will say the unions are coming to pick your pocket. It throws away the incredible rhetoric of the 99% versus the 1%, it blurs the issue of progressive taxation, and centrally, it’s still temporary.”

Both the CTA and SEIU campaigned against the millionaires tax.

Miller said CFT switched its position without consulting members, infuriating activists like him who have spent months working with members and allied community groups to gather thousands of signatures.

“The process was deeply undemocratic,” Miller said. “This was the worst sort of inside-game, top-down unionism.”

Sources in the CFT said the union had planned to take the issue before its executive council this weekend but found its hand forced.

CFT spokesman Fred Glass said the union always made clear that it needed another partner from labor to commit resources to effectively fight the resistance expected to the millionaires tax, but couldn't find one. The California Nurses and Northern California division of the Longshore union (ILWU) had endorsed the tax.

"We were able to push a sitting governor to make a regressive tax much more progressive, and put a lot more responsibility on the shoulders of those who should bear it," Glass said, adding sixth-sevenths of the revenue raised by the compromise initiative will come from higher taxes on high earners.

Fox-Hodess said other unions and community groups in the millionaires tax coalition have not given up on the idea and will decide this week whether to pursue the initiative. The task will be much harder without the teachers union, the biggest and best-resourced partner in the group.

Some backers of the millionaires tax say it wasn’t clear their coalition was going to have enough signatures, which could have influenced CFT’s decision.

But the millionaires tax had the advantage of grassroots momentum, said Michael-David Sasson, a steward in Teamsters Local 2010 who works at the University of California Berkeley. The signature-gathering activated many groups not typically involved in politics, he added.

Longtime observers believe that both CTA and SEIU expected their support for the governor’s tax initiative to translate into more favorable treatment for their members when the ax falls in future rounds of budget-cutting.

“One can imagine there were threats as well as enticements in the discussion,” Sasson said.

Fast-approaching deadlines fed the need to find a compromise. Backers of the consolidated measure will have only six weeks to find 800,000 signatures to qualify it for the November ballot.

California has been hit hard by the economic crisis, but anti-tax legislators have blocked most proposals to raise revenue, and shortfalls have disproportionately translated into cuts. The state budget has fallen from $102 billion to $87 billion in the last four years. Support for the elderly and disabled has been slashed, libraries and parks have been closed, and tuition at California’s public universities and colleges jumped 21 percent last year alone, the highest increase in the nation.

Late February polls by the CFT showed support for the millionaires tax at 69 percent and backing for the Brown proposal at 56 percent. A third tax initiative had 40 percent support.

Separate polling by the Public Policy Institute of California showed the Brown proposal at 52 percent, down from nearly two-thirds several weeks ago.

Taxes on millionaires are gaining in popularity nationwide. Oregon voters passed a tax on the state’s wealthiest 3 percent two years ago, and in the wake of the Occupy movement, New York's governor extended special levies on high earners, backing away from his earlier opposition to such taxes.

Despite the public enthusiasm for the millionaires tax, several of California’s biggest unions had lined up behind the governor.

In January the 295,000-member CTA announced its support. Despite the poll numbers, CTA argued that Brown’s measure had the best chance at the ballot box. The California Business Roundtable and the Chamber of Commerce, among other large corporate interests, opposed the millionaires tax.

A similar tension existed inside SEIU, which has 700,000 members in California. The SEIU state council voted to back the Brown proposal in November, over the objections of several large public employee locals that wanted to throw the union’s considerable resources behind the millionaires tax.

But after a call for per-capita-weighted voting, the endorsement tilted in favor of Brown. The council voted to bind locals to the state council’s endorsement, barring dissenting locals from endorsing or funding the millionaires tax.

Sources familiar with the endorsement confirm it was driven by officials originally appointed by the SEIU International to run its giant statewide health care union, UHW, after the local was trusteed in 2009.

Rank-and-file activists expressed frustration with the insider approach, especially after the openings created by Occupy and related movements to challenge politics as usual.

“A lot of other unions think about electoral politics as the whole game,” Fox-Hodess said. “It’s just one component of a larger struggle.”

Amanda Armstrong, a head steward in UAW Local 2865, said focusing on millionaires could have reversed the anti-tax mood that for three decades has provoked a steady decline in funding for everything except prisons.

Inspired by the Occupy movement, she and 50 Bay Area students and faculty marched 99 miles to converge on the Capitol in Sacramento March 5.

Joining thousands of teachers and students—from kindergarten to college—their demonstration was fueled by nearly $5 billion in state education cuts that will be triggered if voters don’t approve a tax increase in November.

Hundreds attempted to occupy the Capitol, provoking a standoff with state police that led to 68 arrests. “We’re not going to win this fight by going up to Sacramento to lobby,” Armstrong said.

At his daughter’s school, Sasson had secured the Parent Teacher Association’s endorsement of the millionaires tax. He had planned to table for signatures Friday night and wonders what he should tell the parents now.

“We had the crazy idea that people who are millionaires should be taxed at a higher rate indefinitely, and that moving to Mississippi levels of education funding is not a good thing,” he said. “It was a hyper-reasonable way to engage people who think bake sales will solve the school’s funding problems.”